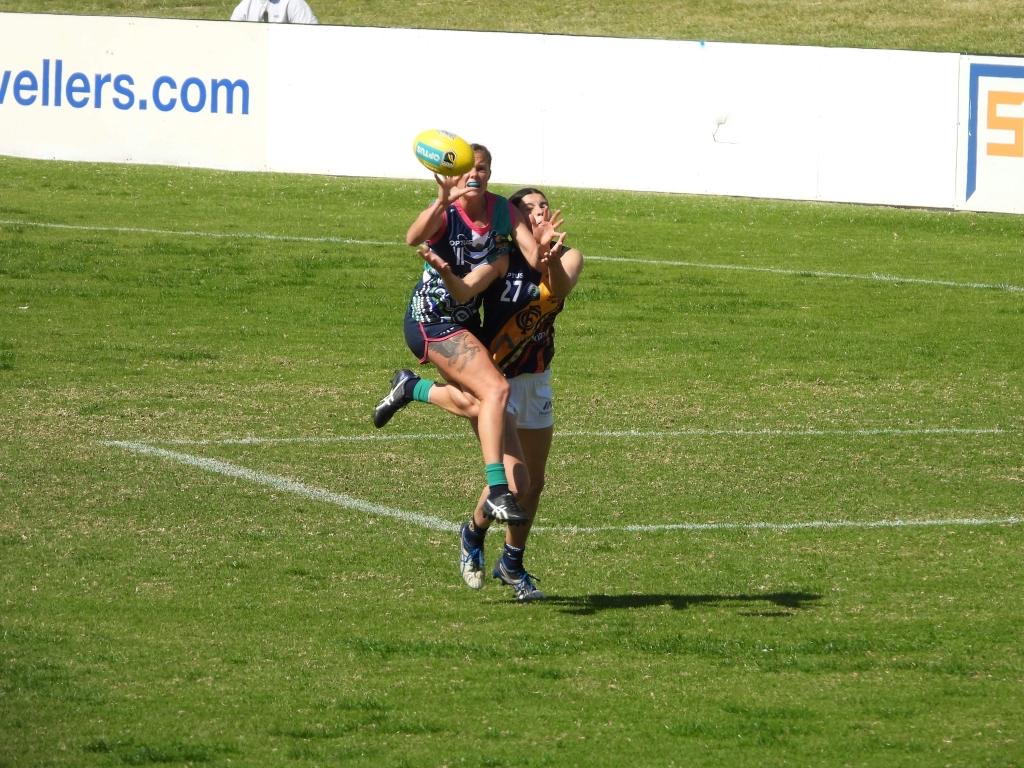 IT is somewhat fitting that Peel Thunder and East Fremantle face off in the preliminary final of the West Australian Football League (WAFL) Women’s competition. The red-hot Sharks, coming from nowhere needed to string three consecutive wins together in the final three rounds – which they did – and then another three in finals in order to take out the premiership. They are no stranger to success, having won the past two flags, including the last for the WAWFL and first for the WAFL Women’s last year. Peel Thunder on the other hand are playing their first ever finals series, and are searching for their first ever finals win.

A last round win to the Thunder over the Tigers helped Peel grab second spot, in no small part thanks to East Fremantle’s victory over Swan Districts. It saw the Sharks sneak into third spot on the table, leapfrog the Swans and end Claremont’s season all in one. Prior to the last few rounds of the season, the Sharks had only won the Round 1 match over newcomers, South Fremantle, and had not managed to find the grove since, losing to each of the other sides along the way. With the return of some key players, the reigning premiers are ready to go deep again, and standing in their way is a young Peel Thunder side that has been mighty impressive this season in what has clearly been a standout 2020 for them.

Kira Phillips again won the goalkicking for the Thunder, being a dominant force with 13 goals in eight games and a major target up there. Kate Bartlett (seven goals) and Krystal Carter (five) have also been prominent. For the Sharks, they have three players on five snags, with Sara Lewis, Katelyn Catalano and Stephanie Sparke all hitting the milestone despite six or less games this season. Now the teams will be relying on them to help kick a winning score, after Peel lost to Subiaco last week, and East Fremantle doubled up on its effort against Swan Districts.

The Peel defence up against the East Fremantle attack will be a battle to watch within the clash, as the likes of Tanisha Anderson and Shannon Whale lead the young Thunder outfit. For the Sharks, their experience up front such as Gabby O’Sullivan and Lewis is key, whilst in defence, the Sharks have Alex Williams and Ruby Schleicher who provide that AFL Women’s talent. They will need to find a way to stop Phillips who is a known goalkicker, as is another AFLW player in Kate Bartlett.

The Thunder have less experience, but make up for it in youthful exuberance. Sarah Verrier is one of Western Australia’s top prospects this year, and is one of 13 players named amongst the extended squad in last week’s match. Along with Verrier, Jade Briggs and Jaide Britton are both top-agers, while Courtney Rowley and Bella Mann are middle-agers showing some promising signs. The Thunder even have a couple of players in their 16th year, with Gracie Fenton and Ella Roberts – the latter of whom does not turn 16 until December. With all that youth, it makes it crucial for the likes of Cassie Davidson and Carter to stand up and settle the team down in big moments.

East Fremantle have no shortage of experience players, but still have some teenagers running around, such as 19-year-old Rosie Walsh who has been a target up forward since booting 11 goals in Round 1 for the Reserves. She earned an AFL Women’s Draft Combine invitation, whilst over-agers Lily Bird, Kate Inglis-Hodge and Zoe Gillard are others who stand out week to week. A player to watch for next year from the Sharks is exciting forward, Chloe Reilly, who is the youngest player in the team, not turning 17 until next month. The Sharks luckily have plenty of experience in O’Sullivan, Kimberley Bowey, Sharon Wong, Madeline Ross and Larissa Versachi, whilst Julie-Ann Norrish has been superb in defence.

The game is hard to predict a winner, with the East Fremantle experience no doubt playing a factor, but the Thunder have so much young talent, they are always dangerous and after getting the first taste of finals out of the way last week, will be keen to post a win and earn a second crack at Subiaco in the grand final next week.