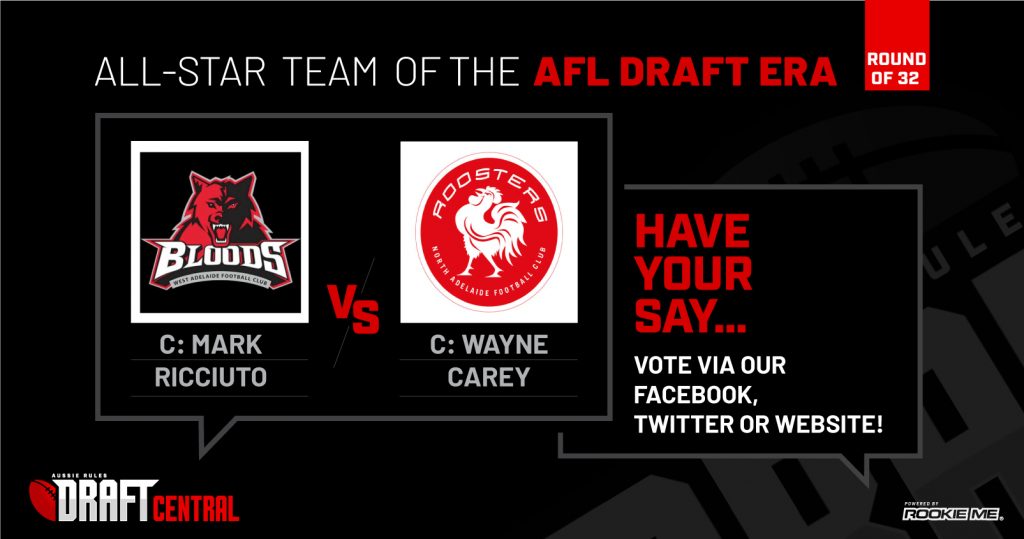 OUR next All-Star Team battle is one between two South Australian clubs in West Adelaide and North Adelaide. The two captains voted in by the public as the All-Star Players of the AFL Draft era were Mark Ricciuto (West Adelaide) and Wayne Carey (North Adelaide).

These clubs are seeded 11th (West Adelaide) and 22nd (North Adelaide) respectively, forming another Round of 32 clash in our second half of the draw. The winner will qualify for the Round of 16 stage, set to face the winner of our Central District vs. Dandenong Stingrays tie.

The West Adelaide starting 18 is very strong, particularly in midfield and defence. Ben Rutten and Sam Fisher form a stingy key position pairing down back, supported by the likes of Rory Laird and Beau Waters among the six. It gets even better in the engine room, led by skipper Ricciuto, who is joined by fellow Brownlow medalist Adam Cooney on the ball. Adelaide 300-gamer Tyson Edwards is also among the action, while Shaun Rehn was a straightforward choice for the ruck duties.

North Adelaide’s defence is just as good, if not better with Phil Davis and Sean Wellman heading the likes of Ben Hart and Jared Rivers in support on the last line. The marking power up forward is also formidable, as one of the all-time greats in Wayne Carey commands the six alongside Holland brothers, Nick and Ben. Another set of siblings, Darren and Andrew Jarman also provide some class through midfield and the forwardline.

Scott Welsh features as an 188cm centre-half forward for the Bloods, though that problem can be easily rectified by the height of Rhys Stanley up forward, and pure excellence of Tony Modra. While the starting 18 is very solid, West Adelaide’s bench depth is decent, but doesn’t feature as many world beaters.

The Roosters’ midfield isn’t quite as fearsome as West Adelaide’s despite featuring Jarman, Shane Edwards, and Josh Francou, while the standard on the bench again drops off a touch, but not significantly.

This one is much tighter than the seeding suggests, but we think Westies’ midfield strength will go a long way to taking out this battle against their South Australian counterparts. 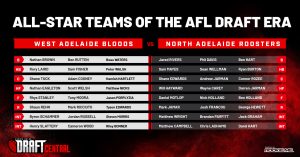 Which All-Star Team would you pick?
Create your own Quiz