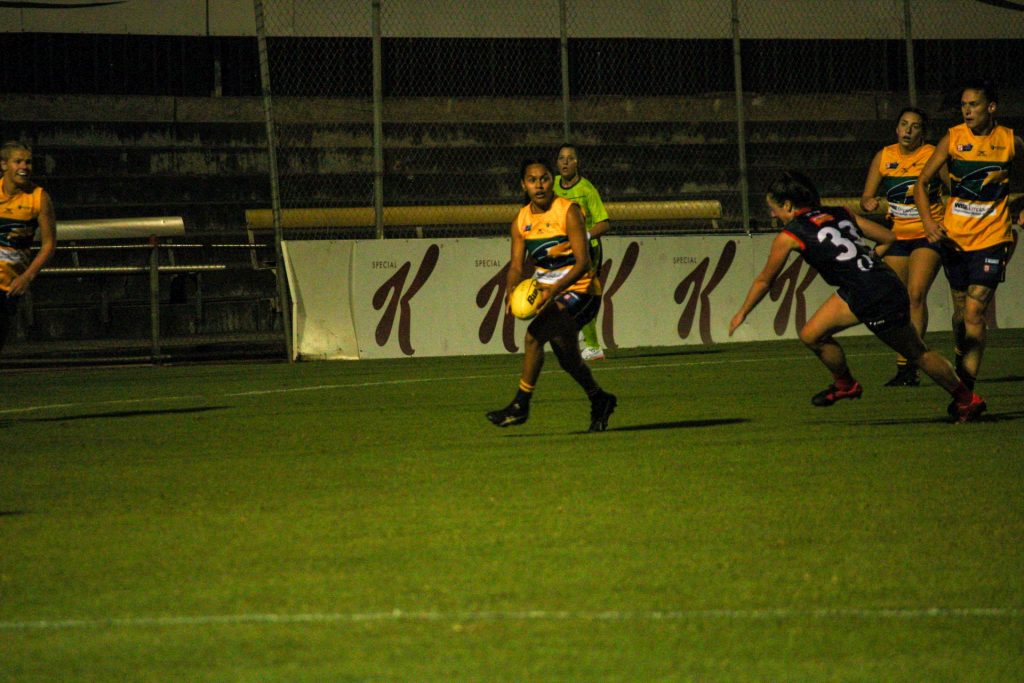 WOODVILLE-WEST Torrens Eagles are the next team up in our South Australian National Football League (SANFL) Women’s season review series as we look at the eight sides in reverse ladder order and how their 2020 seasons went down.

Woodville-West Torrens Eagles landed the wooden spoon in their inaugural season, going through 2019 without a win. Luckily for the Eagles they broke that drought after a number of close contests, winning against Glenelg by 25 points in Round 4. It was a deserving victory just before the break, and gave them confidence going forward. After a couple of tight losses – and a couple of beltings – the Eagles won in the final round of the season, toppling Sturt by 15 points to leap off the bottom of the table and avoid the wooden spoon.

A 17-year-old with some serious wheels, Dolan came into her own in the last month of the season, being amongst the Eagles’ best. She was able to play in defence or further up the ground, and generally use it well when having time and space. She is not afraid to take a bounce and try and gain metres for her side.

A versatile utility who just played consistently all year, Lee started as a full-forward and progressed into a full-back, then would play at both ends during games. She was the club’s leading goalkicker last season and went that way again in 2020, but what made it more remarkable was her ability to adapt to defence. Her contested marking and long kicking are among her strengths.

One of the quickest players going around, Maher provided the need for speed out of defence. She went on four or five-bounce runs more than any other player and was great at finding space down the outside of the field. Continued to improve throughout the year and is still only an over-ager.

Represented South Australia at Under 16s level last season, Parish is still only young but showed good progression signs as the season went on. Playing in her first season at League level, Parish held her own, often standing up in defence and providing good run off half-back. She does not need to be a high disposal winner to catch the eye.

Another Central Allies representative at the AFL Women’s Under 18 Championships last year, Usher is one who has a crack in the midfield, or can play in defence and settle the team down. While only standing at 157cm, coaches know what to expect from Usher.

Some of the more consistent performers throughout the season, 21-year-old Jovanka Zecevic won the club best and fairest, hardly putting a foot wrong all year in a multitude of roles. Renee Forth and Chloe Forby provided great experience and reliability through midfield and half-back respectively, while Amie Blanden rotated well between the middle of the ground and as a target up forward. Another underrated player was Anastasia Falkenberg who continued to deliver from a team perspective each week.

Woodville-West Torrens Eagles became renowned for their tackling pressure throughout the season, and made it really difficult for opposition teams to score in the first half. Once the others gained more AFL Women’s experience back, the Eagles struggled, but still picked up a win to get off the bottom of the table. Had Jess Sedunary not gone down with injury, and Jaimi Tabb been available, no doubt the Eagles would have pushed some of the other sides in the run home.