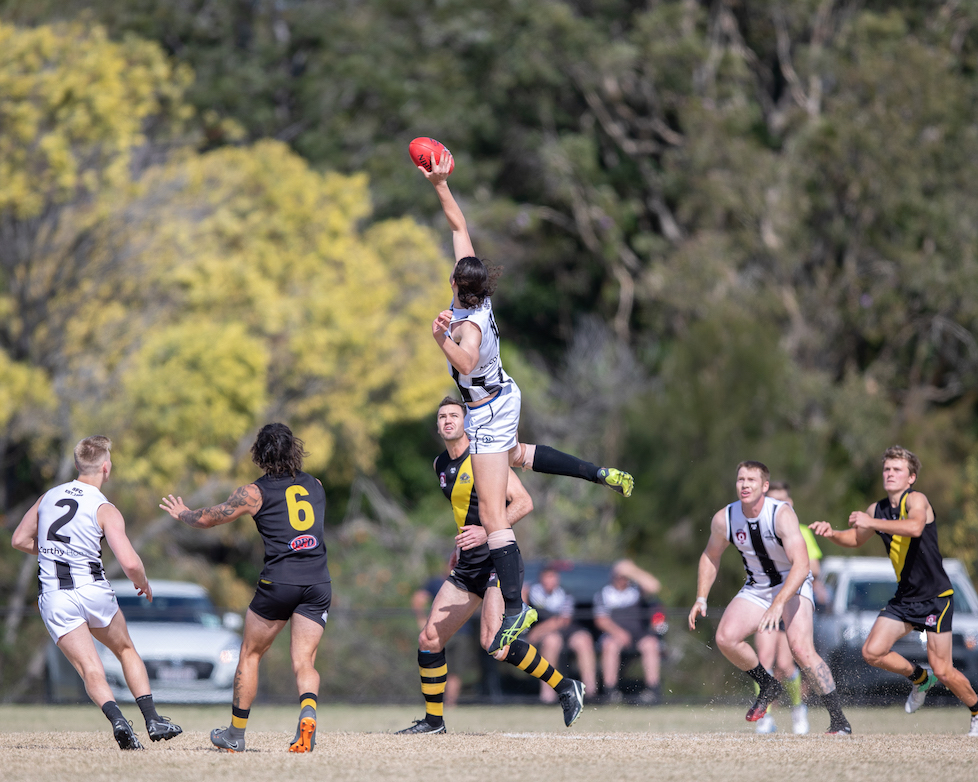 BROADBEACH solidified itself as the Queensland Australian Football League (QAFL) premiership favourite following a 50-point victory over second placed Morningside in the final round on the weekend. The victory guaranteed the Cats top spot and the minor premiership, whilst the Panthers finished second. Palm Beach Currumbin locked up third spot with a comprehensive win over Mt Gravatt, while Maroochydore and Sherwood both picked up vital wins ahead of finals.

In the top of the table clash between the Cats and Panthers, Broadbeach overcame an inaccurate start of just 1.7 in the opening term, to boot 12.9 after that, and run away with a 50-point win. The Panthers booted four last quarter goals, bu still fell well short despite the efforts of Will Pendlebury and Edward Mallan. Clay Cameron and Connor Nutting both kicked three goals apiece, while Kwaby Boakye, Ethan Reeves and Max Lower were named the Cats’ best in the win.

Palm Beach Currumbin enjoyed a comprehensive eight-goal win over Mt Gravatt, booting nine goals in the first half on their way to a strong 15.12 (102) to 7.12 (54) victory. Max Spencer was best on ground with five majors, while Jamison Shea (four) and Brayden Crossley (three) also stood out. For the Vultures, Jonah Licht was a shining light in attack, snagging five goals, while Joel Leahy and Todd Carbone were named among the best. The win knocked Mt Gravatt down to sixth, which means the two sides face off again this weekend.

Maroochydore ensured it booked itself a finals spot and avoided sixth placed with a 37-point triumph over Surfers Paradise. It was the final nail in the reigning premiers coffin, as the Demons failed to make finals after holding the cup aloft last year. Mitchell Scholard continued his goalkicking form this season with three goals for the Roos, as Carter Michael was one of four players to kick a couple of goals, but was also named among the best with Jacob Simpson. For the Demons, Max Pescud kicked a couple of majors, named in the best with Jack Prestegar and Daniel Charlesworth.

In the final game of the round, Sherwood nabbed fourth spot courtesy of a hard-fought 18-point win over Labrador. The Magpies did the bulk of the work in the opening term, booting six goals from 14 scoring shots to lead by 32 points at quarter time. The Tigers cut the deficit to eight by the main break but Sherwood was the better side after half-time, booting four goals to three, and dominating possession in what could have been a larger margin in the 11.18 (84) to 10.6 (66) – 13 more scoring shots. Liam Dawson kicked the three majors in the win, while Claye Beams and Bruce Reville were named among the best booting a couple each, and Errin Wasley-Black was named best on ground. For the Tigers, Blair Rubock snagged four majors and Bryce Retzlaff kicked three, while Thomas Miller was deemed best.

The following scouting notes focused on the top of the table clash, Broadbeach vs. Morningside and the last-chance saloon sixth-against-seventh Surfers Paradise vs. Maroochydore.

Coleman backed up his outstanding game last week with another strong performance in a losing side. He started the game well by impacting clearances and creating some effective link-up play through the middle of the ground. Coleman always provided an option for teammates moving the ball forward and has a clean grab, evidenced by a nice mark in the hands from a kick out in the first quarter. He has a great leaping ability and is very athletic for his size, so opposition players have trouble defending him in the air.

Coleman drifted out of the game in the second term but had a solid second half. He spent most of his time up forward and rolled through the midfield in short bursts. His impact as a midfielder was more profound, as he won plenty of contested possessions and always picked the ball up cleanly. This was highlighted when he burst through a stoppage at pace, plucked the ball off the ground one-handed and got the clearance in the last term.

He did have his moments as a forward despite the minimal opportunities. This included a nice front and square in the third quarter and a great mark he took in the goal square just minutes later. He got the mark by reading the flight of the ball better than anyone else, and then he finished off the good work by putting the goal through. Morningside were a long way behind in the last term, but Coleman never stopped working tirelessly. This was validated when he produced a magnificent run-down tackle in the final term to cause a turnover (holding the ball) in the middle of the ground. He did well to not fall in the player’s back as well, as his momentum could have easily launched him forward and caused him to give away a free kick. Coleman will play a major role for Morningside this finals series.

Crozier drifted in and out of the game on Saturday but still showed some positive signs. He played on a wing most of the time and worked hard defensively and offensively to get involved in the contest. When the ball was in his area, Crozier attacked it hard and won some strong contested footy. He gave some nice handballs in congestion and positioned himself well defensively. Morningside continually bombed the ball forward though rather than looking for runners, so this meant Crozier was unable to provide much of the link-up run that he is known for. In the second term, he took a nice intercept mark, won a 50-metre penalty and put through the set shot from about 40 out to kick his side’s first goal for the day.

Colenso played up forward for most of the game, and it was a very tough day to be a Morningside forward. The delivery was rushed and rarely to Colenso’s advantage, so he never had much of a chance to make a major impact. To his credit, he did not drop his head and worked very hard to keep providing an option and apply pressure on the opposition. Late in the game he got thrown into the midfield to try and give his side a much-needed spark, and he had some nice moments where he picked the ball up cleanly and dished it out to teammates. When he gets the footy he always looks to move it quickly, which is important at half-forward because it means other forwards can get one-on-one opportunities before the opposition flood their numbers back.

Reeves played as a defensive wingman and was absolutely outstanding. He has a fantastic work rate and was more than willing to put his head over the footy, take contact and create space for his teammates. Reeves positioned himself well around the contest so that he could impact at clearances but also could spread quickly into open space when his side won the footy. Second and third efforts are a trademark of Reeves’ game, as he never gives up on a contested situation, never stops running and always follows up his possessions.

As the commentators noted during the match, Reeves’ kicking is known to let him down at times. However, his short kicking was reasonably effective in this match and he delivered some very nice inside 50s to the advantage of his teammates. One of these was in the final term, where he demonstrated that he has good vision by finding an open teammate inside on the 45. Reeves also collected some nice half-volleys in congestion and impacted aerial contests with some excellent spoils.

In the final term, Reeves had a great moment that exemplified the type of player he is. He stood under a high-ball on the 50-metre arc and got crashed into by others flying for the mark. While he could have stayed down, he popped straight back up and hunted the footy, immediately winning a contested ball amongst a big pack of players. For his efforts, he won a free kick and then went back and kicked a well-deserved goal. Reeves will be very important for Broadbeach throughout the finals series.

Gore had a strong game for the Cats. He is a lively forward that impacted the game in multiple ways, but mainly through his pressure inside 50. Gore used his pace to make the opposition panic when coming out of defence, highlighted in the second quarter when he laid two strong aggressive tackles to win holding the ball decisions. He also used his pace to consistently get to ideal crumbing positions and break away from opponents when he got the ball. Gore showed great composure in the final term when he quickly got off the ground with the ball in hand to turn, deliver a short kick inside 50 and set up a goal.

Fyfe played at half-back for the Cats and had a solid game. He was quiet in the first quarter, but this was mainly because the ball barely went to that end of the ground. In the second, he lifted to apply some outstanding pressure and impact aerial contests in the defensive 50. He regularly went up to spoil as the third-man-in to help his fellow defenders combat the opposition forwards’ marking abilities. Fyfe was very clean in the second half, particularly when picking the ball up in congestion and handballing to teammates. Although the service to Morningside’s forwards was not great, Fyfe proved very difficult to out-mark and looked very comfortable in one-on-one contests.

Michael’s strong season continued will another stellar performance for Maroochydore on Saturday. The Brisbane Lions Academy prospect started the game on fire, running around the back of a teammate to receive a handball on the 50-metre arc and kick the first goal. His opponents clearly did not learn from this occurrence, as about 15 minutes later he made the exact same play to kick his second from a similar distance. Michael’s booming left foot kick is his strongest asset, so he looks to get onto that side of the body whenever possible and his teammates always look to give him the ball. This resulted in a lot of great ball movement out of the defensive 50, as Michael effortlessly found teammates by foot on a consistent basis in the first half. He also took the kick outs and showed-off the range in his kicking by launching one all the way to centre-wing in the opening term.

Late in the game, Michael spent a bit of time in the midfield and did not look out of place. He was willing to put his head over the ball, win his own footy and use quick hands to release open teammates. Throughout the game he also applied some strong pressure on the opposition, as shown when he stuck a tackle in the second term to win a holding the ball decision. After this, he immediately looked into the centre corridor and found a teammate with a typical spearing kick. When Michael plays with this type of confidence, he is very difficult to stop.

Pescud was one of Surfers Paradise’s standout players on Saturday. He kicked his team’s first goal after producing a nice lead up at the ball carrier and taking the mark with strong hands. In the second term, he showed poise with some clean takes and quick hands on the up to teammates. He also took a spectacular hanger with a great leap in this term. Although this was definitely one for the highlight reel, he unfortunately missed the set shot at goal. This was a theme for Pescud on the day, as he kicked two goals but could have easily had five or six if he had kicked straight. Regardless, he was very lively up forward by consistently hunting the ball and applying plenty of pressure on the opposition. He also took a nice intercept mark in the last quarter, worked hard on the lead and demonstrated that he has good speed.