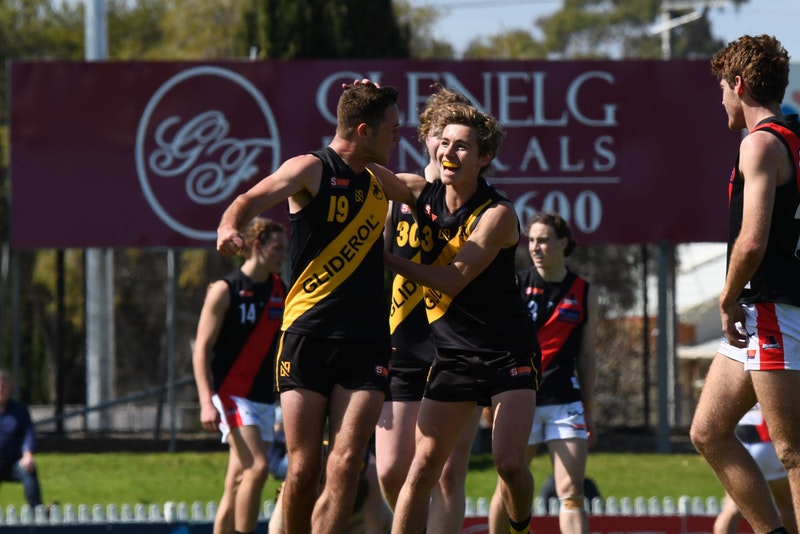 THE TOP junior prospects from South Australia rolled on into Round 11 of the SANFL Under 18s competition, with a number of standouts continuing to emerge. In this edition of Caught the Eye, we have again compiled a list of the best and most promising performers from across the weekend, with one representative from all eight SANFL clubs. For extended profiles on each AFL Academy member and National Combine invitee listed, click on their names highlighted in red. For our full weekend scouting notes, click here.

Our scouts said: “The bottom-aged Davis continued his impressive season at Tigerland with another encouraging performance on Saturday. A versatile prospect, his work rate around the ground enabled him to collect an equal game-high nine marks and have an impact across all zones of the field.” – Tom Wyman

Verdict: Davis’ numbers across the past month stack up as well as any other Bays player, and he still has at least another year left in the Under 18s system. The bottom-ager has been crucial to Glenelg’s semblance of competitiveness while its depth has been greatly tested, rotating seamlessly between the midfield and forwardline. He impacts in every third of the ground, most significantly up forward as he bagged another set of multiple goals this time out. Davis is setting up nicely for a big top-age campaign in 2021.

Our scouts said: “The strongly-built key forward tried his best to will his side over the line, booting three goals straight in the first half to keep the Bloods in the contest. The West Adelaide midfielders looked for him up forward whenever possible and he provided a strong presence in attack. He took seven marks for the contest and appeared threatening whenever the ball was in his vicinity.” – Tom Wyman

Verdict: Young is another bottom-ager who has built into a rich vein of form lately, and again provided a reliable focal point for West Adelaide despite another loss. A state Under 16 representative in 2019, Young is already a known quantity and utilises every bit of his solid frame to play well above his height. The test for him as a top-ager will be consistently stringing together such an output throughout the season, while proving he can play the same way against mature bodies.

Our scouts said: “(Nelligan) imposed himself on the game with a mammoth first term, which saw him have three shots on goal and cover almost every inch of the ground. His big tank allowed him to be at almost every stoppage where he used his strength and acceleration to be lively and often the most damaging. When he was not plugging holes in his defensive 50 and being a part of every Redlegs’ midfield play, he was resting forward and looking just as dangerous.“ – Eli Duxson

Verdict: One of a few South Australians who would consider themselves unlucky not to have received a national combine invite, Nelligan will obviously do his draft chances no harm with performances like this. 47 disposals is quite the effort, let alone in 26-minute-flat quarters, and the diminutive midfielder has again proven he is simply a class above many of his fellow Under 18s. Hitting the scoreboard with three goals bodes well for him, as he is more likely to feature as a small forward at senior level. He may be in line for another promotion in 2020 with such form, having made his League debut earlier in the season.

Verdict: Another 16-year-old who is beginning to emerge two seasons out from his draft year, Tuck was exceptional on the weekend in what was a tough game for the Bulldogs. Initially stationed in his usual defensive post, the under-ager went about his usual business with some excellent intercept work and aerial prowess. He even went on to rotate through the ruck, and while he proved a touch undersized, still got his hands on nine hitouts. Having showed plenty of promise, hopefully Tuck can string some more impactful performances together to cap off 2020.

Our scouts said: “Pencil in the name to remember for next year because Draper was best on ground as a bottom-ager… every time he went near (the ball) he managed to gain ground and looked like bringing a teammate into the game… he exits the stoppage around the back to get onto his right and has a long kick that can penetrate defensive zones. Hard not to notice him when he stands up in the biggest moments of the game.” – Peter Williams

Verdict: It was another terrific display from Draper, who is really coming into his own as a midfielder. With fellow bottom-agers Jason Horne and Matthew Roberts away from the Under 18s side, Draper has become South’s prime mover through the middle and is beginning to showcase his enormous upside. As the Panthers’ leading disposal getter of late, Draper has shown that he can fill out into a prototypical big-bodied mid, having also proven his prowess up forward already this season.

Our scouts said: “Really impressed me playing in defence after a quieter outing last week… often being a rock on the last line. He took a number of crucial one-on-one marks in the second term, and was responsible for switching play out of the back half, showing great composure and being a key player for the Double Blues in the win.” – Peter Williams

Verdict: The top-aged talent has been somewhat of a mainstay for the Double Blues down back, managing nine outings thus far. Grieve’s ability to chime in with key possessions and intercepts across the back half has been important to Sturt’s success in 2020, as he uses his solid frame to sure up the defensive 50. Having proven his worth on multiple occasions already this year, the defender deserves a nod of recognition.

Our scouts said: “Santillo was one of the best players afield, employed as somewhat of a sub-175m centre half-forward. The diminutive mover presented brilliantly all day for the Roosters, hitting up full-chested at everything his midfielders sent forward. The bottom-ager was also able to mop up at ground level when the delivery was not so flash, zipping his way through traffic and onto his favoured side to hit targets inside 50.” – Michael Alvaro

Verdict: Another state Under 16s squad member from last year, Santillo continues to get busy for North Adelaide up forward. Taking on a role similar to how Tariek Newchurch has been utilised, the diminutive bottom-ager played it perfectly. His zip at ground level, clean hands, creativity, and defensive pressure are all key tropes for small forwards, coming to the fore in arguably his best outing for the year. Santillo gets up the ground well, but seems likely to prove more effective deep inside 50 in future given his size.

Our scouts said: “Smith rotated between the forwardline and ruck to good effect. He showed some of the upside which earned him a national combine invite, following up well at stoppages while also faring well aerially as expected. Smith was another to use his height to advantage, clunking some big pack marks both around the ground and inside forward 50 against multiple opponents.” – Michael Alvaro

Verdict: The Woodville-West Torrens bigman complimented Zac Phillips perfectly in the ruck throughout his latest outing, showing some good craft in said area when rotating through. His best work is arguably still done up forward though, with aerial marking his strength – especially given all five of his clunks on the weekend were contested. It is easy to see why Smith received a national combine invite, as his mobility and follow-up work at over 200cm is highly promising.