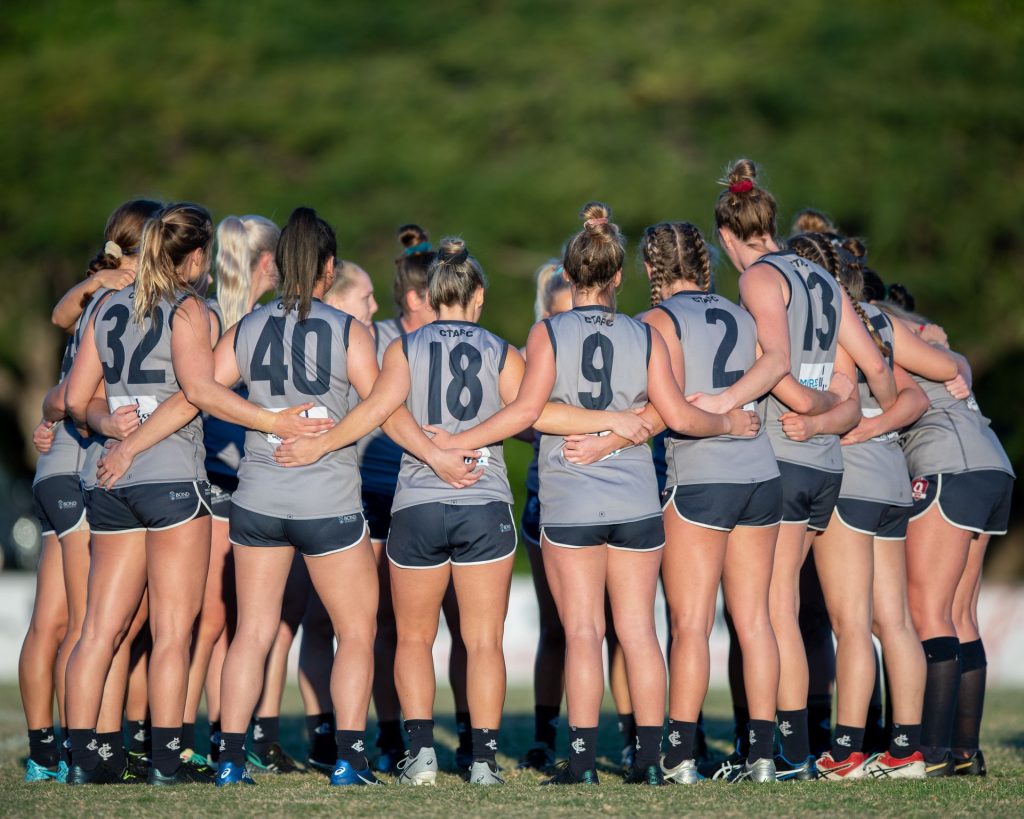 THE final round of the Queensland Australian Football League (QAFL) Women’s competition went as expected for those backing the favourites in, as the four highest sides in each of the respective matches won their clashes to see just one change on the overall ladder from Round 11 to Round 12. That change came in the form of Yeronga South Brisbane moving up one spot to fourth, sentencing Coorparoo to fifth, in what ultimately just means the Devils will be the home team in their elimination final clash. Maroochydore held onto third spot and will take on the sixth placed University of Queensland outfit, whilst Bond University and Coolangatta Tweed’s efforts to finish top two earned them a week off.

In what lived up to be the tightest match of the round, top of the table Bond University won by 24 points over Coorparoo in what could be a preliminary finals clash in a couple of weeks time. It was a tight first term with the Sharkettes booting 2.0 to 1.1, then kicked the only two majors of the second term to extend the lead out to 19 at half-time. Both sides managed a goal in the third term for the difference to remain at just over three goals, before a high scoring final term of five goals – three to the Sharkettes, two to the Kings – resulted in Bond University winning 8.5 (53) to 4.5 (29).

Taylor Smith led the way for the winners, snagging three goals, while Casidhe Simmons kicked the two. Also amongst the goalkickers for the Sharkettes were youngsters, Charlotte Hammans, Lily Tarlinton and Tegan Levi. Serene Watson was best on ground in the victor, whilst Lucy Single and Annise Bradfield helped their side secure the minor premiership. For the Kings, Tori Groves-Little, Emma Zielke, Jess Wuetschner and Jenae Govan all kicked goals, while Jade Ellenger continued her ripping 2020 QAFL Women’s form with another best-on performance from the navy blue side.

Taking on the bottom side, Coolangatta Tweed still needed to win to secure a week off in finals, and the Bluebirds did just that, kicking six goals to zero after quarter time to win by 35 points. They booted 6.2 to 0.4 in the final three quarters to record an impressive 7.3 (45) to 1.4 (10) win. Selena Priest, Lauren James and Kitara Farrar all kicked the two goals for the winners, while Ebony Peterson, Bethany Pinchin and Alexandra Hamlyn were named among the Bluebirds’ best. For the Hornets, Shaye Easton snagged the first quarter major, while Kylie Guarino, Sarah Giles and Courtney Daniec were once again named among Aspley’s best.

Posting an equally one-sided victory over a bottom two side, Maroochydore locked away third spot with a 34-point triumph over Wilston Grange. After a tight first half which saw the Roos lead the Gorillas by just six points at the main break – and a goalless second term – Maroochydore booted the only four goals of the second half, whilst restricting Wilston Grange to just one behind, to win 6.7 (43) to 1.3 (9). Mikayla Pauga (three goals) was the standout up forward and named among the best with Isabel Dawes (one), Shannon Campbell (one) and Tayla Gersch. For the Gorillas, Brianna McFarlane kicked the only goal of the game, while Chloe Litherland, Mackenzie Findlay and Brooke Randall were named among the team’s best in defeat.

In the final game of the round, fifth placed Yeronga South Brisbane moved ahead of Coorparoo on the table with a comprehensive 32-point win over sixth placed University of Queensland. The Red Lionesses still held on to make finals, but only booted the one third quarter goal, going down to the impressive Devils, 6.5 (41) to 1.3 (9). Courtney McDonnell and Lexia Edwards both snagged a couple of majors each, while Zimmorlei Farquharson and Lauren Arnell registered a major. Jade Pregelj, Rachael Anstey and Jordan Zanchetta were all named among Yeronga South Brisbane’s best on the day. For the losers, Megan Hunt kicked the only goal, while Mikayla Martin, Sara-Jane O’Grady and Nat Grider all impressed across the field.