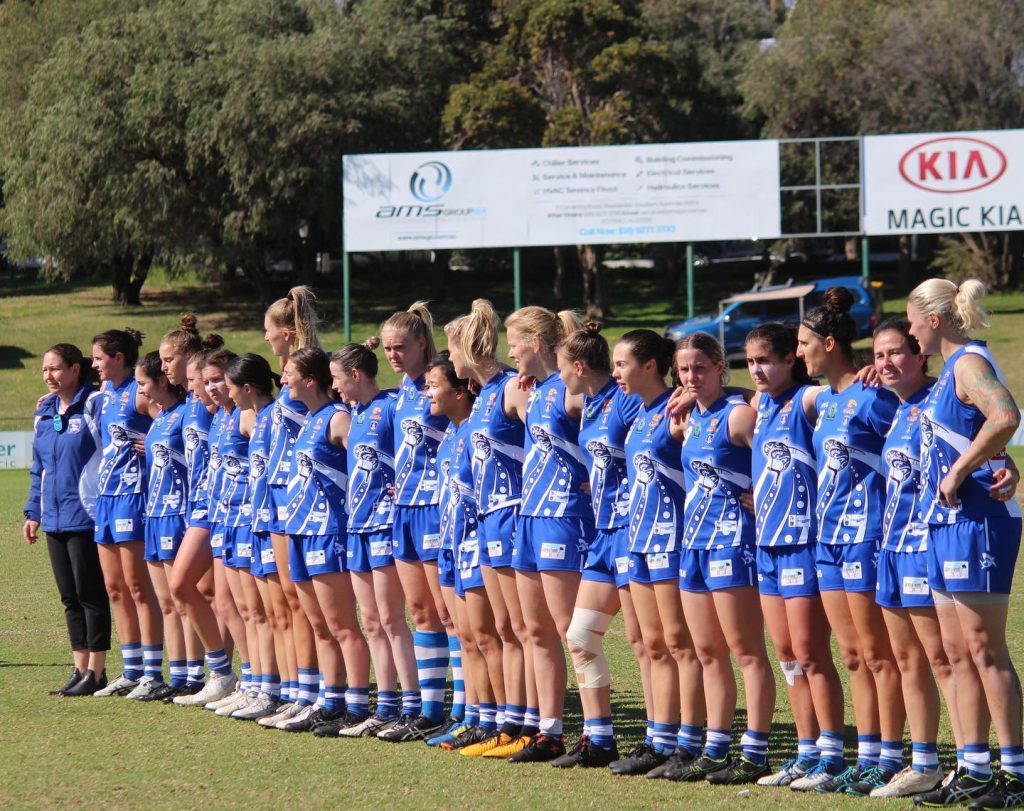 A FINAL quarter frenzy by reigning premiers, East Fremantle has seen the Sharks bob up and defeat Swan Districts for the second consecutive week in the West Australian Football League (WAFL) Women’s competition. Last week’s win over the Swans was to secure home ground advantage – as well as a finals spot itself – while this week was putting the final nail in the black and whites coffin for the season. In what was an unpredictable contest – from the matchplay to the weather – East Fremantle got up just in the knick of time despite being held scoreless for two quarters.

The Sharks kicked the first two goals of the game thanks to a strong breeze favouring their end at New Choice Homes Park, with Samara Pluschke getting on the board via a snap just one minute into the contest. The Swans had chances of their own, with young guns Mikayla Morrison and Shanae Davison combining to give veteran, Fi Boucher a chance but could not quite control it, while Nyra Anderson kicked into the player on the mark from 20m out. The wind was making it difficult for the Swans, with even the football seemingly barracking for the Swans.

Ashley Sharp was running into an open 50, only for a Jack Crisp-like bounce to cause her to reassess, only to be caught by Pluschke at half-forward. Julie-Ann Norrish and Alex Williams were having sensational days down back, whilst Gabby O’Sullivan was doing Gabby O’Sullivan things, and setting up her teammates. A long bomb inside 50 only just missed the hands of Rosie Walsh, but O’Sullivan’s next touch was an intercept and handball to Lily Bird 30m out who made no mistake off a quick step from 30m. The Sharks led by 14 points, and it was only a Jess Cox chance – a snap towards goal – that was knocked through for a behind to make the deficit 13 points at the first break.

The second term was more of an arm-wrestle for both sides, as Mother Nature had a laugh at the players expense. The strange term began with Larissa Versaci winning a free for being polaxed – by her own teammate – much to the shock of Anderson who the umpire blamed for the contact. Light rain began falling a few minutes into the contest, and that became heavy rain seven and a half minutes through, before Mother Nature decided she wanted to go the full distance and just outright bucketed down in what was more of a good day for ducks rather than Swans or Sharks, but both sides adapted to the new conditions.

It was unlucky for the Swans who could not take full advantage of the wind like the Sharks had in the first term, but after a few chances from Anderson and Tara Stribley, Swan Districts broke through. Morrison had a set shot that looked like it was a dry day, putting through a vital major, the first of the contest for the visitors to draw within five points at half-time. The work of Mikayla Hyde and Hayley Cole had been impressive, as the Swans just kept within touch at the main break.

The rain lightened up after that, with the third term more wet conditions than consistent rain, and it was Swan Districts that emerged beneficiaries despite kicking into the wind. They booted three goals to zero, holding the Sharks goalless for a second straight quarter. Off the back of some great work by Anderson, Sharp was able to get ball to boot early despite slipping over, handing her side the lead. Not long after a multitude of 50s in an undisciplined effort by the Sharks, handed dour full-back Lauren Osborne with the most unlikely of set shots from the goalsquare. The defender delivered for the Swans, extending her side’s lead out to seven points at the 10-minute mark of the quarter.

A kicking in danger call against Ruby Schleicher gave Mikayla Hyde a set shot from 30m, with the talented top-age teenager making no mistake, judging the breeze perfectly. Along with Anderson, Davison and her sister Brianna Hyde, Mikayla was willing her side to victory. With the lead out to 14 points, East Fremantle needed a response, but unfortunately could not muster anything of note as Versaci had a good old fashioned worm burner in the Sharks’ only set shot of the term.

Having to match Swan Districts’ effort of three goals against the breeze in the last quarter, the Sharks got to work looking damaging from the get-go. Katelyn Catalano got them on the board for the first time since midway through the first term, albeit soccering through a behind. Swans had moved Boucher to defence in order to add some extra experience behind the ball, but she was caught holding Sara Lewis who made no mistake from 15m out and got the ball rolling for the home team. The Swans continued to attack, but the work of Norrish, Williams and Schleicher was keeping them at bay. Morrison missed an uncharacteristic flying shot at the goal six minutes into the term to make the margin eight points, which would end up being the Swans last score of the game.

East Fremantle dominated possession the next six minutes, but it would take a defensive effort from Versaci who laid a terrific tackle, to nail a set shot from 15 metres to draw within two points. In a surprise to no one, it was O’Sullivan who popped up with the game-winner. Receiving the handball out of a stoppage, O’Sullivan put ball to boot with a clever snap to create something out of nothing and hand her side the lead with five minutes to play. Chloe Reilly almost kicked a third goal in a few minutes with the outside of the boot, but it went through the wrong sticks.

The lead was still four points, and despite Mikayla Hyde and Davison pressing up the wing great defensive pressure from the Sharks kept the Swans from advancing any further. With a couple of repeat stoppages inside 50 – and an O’Sullivan set shot that chewed her 30 seconds off the clock – the reigning premiers were able to hold on in a game that was as unpredictable as the 2020 year, and move through to face Peel Thunder in the preliminary final next week.

In an equally topsy-turvy game, minor premiers Subiaco were able to hold on in a low-scoring win over Peel Thunder to book a spot in the WAFL Women’s Grand Final. The Lions booted the only two goals of the first term to lead by 13 points, before the Thunder kicked three of the next four majors to hit the front at half-time. Trailing by two points at the main break, Subiaco edged ahead courtesy of a 1.2 to 0.0 third term, and in wet conditions held on in a no-score final term. The end result was a 4.4 (28) to 3.4 (22) victory in favour of the Lions who now have a week off to await the winner of Peel Thunder and East Fremantle in the preliminary final next weekend.

Kia Buckley (two goals), Aimee Schmidt (one) and Abbey Dowrick (one) all hit the scoreboard for the Lions, while Kate Bartlett (two) and Chloe Wrigley (one) were the major goalkickers for the Thunder in defeat. Subiaco’s best were Jessica Ritchie, Tiah Haynes and Ange Stannett, while the experience of Hayley Miller was crucial. For the Thunder, Wrigley, Courtney Rowley and Tanisha Anderson were all named amongst the best and will be important in their clash next week.