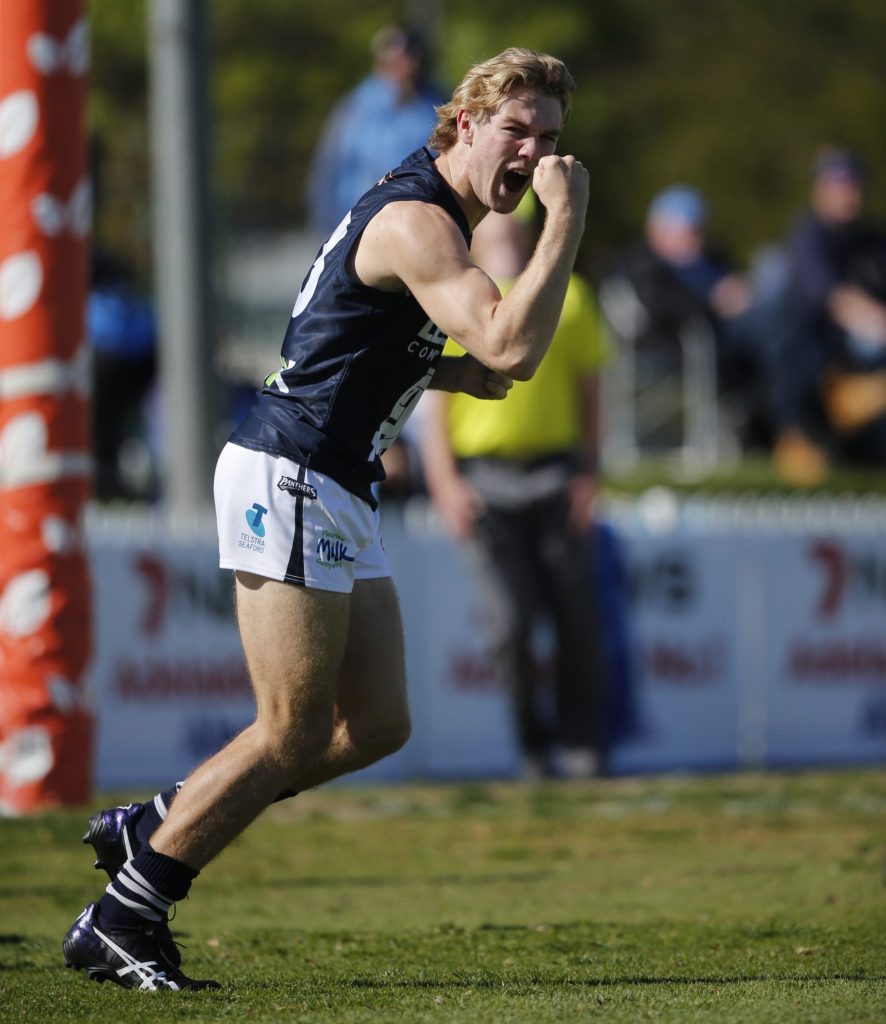 WITH young guns impressing at state league level around the nation, we again narrow our focus for this week’s South Australian National Football League (SANFL) wrap to the performances of youth throughout all three grades. There is plenty to unpack in our third altered edition, with Under 18 prospects scattered across the two senior competitions, and a bunch of youngsters impressing in the junior grade.

Central District pulled off a terrific upset win over Norwood at League level, though both sides were hit by casualties throughout. Of draft relevance, Bulldogs small forward Corey Durdin would only manage one touch before again going off injured in his return game. Dandenong Stingrays graduate Jack Toner impressed again with 16 disposals and a goal in Centrals’ triumph, while Isaac Saywell (14 disposals, five marks) showed promise and 18-year-old Daniel Fairbrother (11 disposals) retained his spot. The result sees Central District move off the bottom of the ladder, while delivering a big blow to Norwood’s finals hopes.

At Reserves level, goalsneak Nicholas Lange booted two majors as the Bulldogs earned a 10th win for the season to remain atop the two’s ladder. NT draft prospect Brodie Lake also found the big sticks in his debut outing, while fellow Under 18 Lachlan Grubb was another to contribute to the Dogs’ victory. For Norwood, crafty junior Michael Cavallaro was one of just two goalkickers, while Jack Saunders and Jack Heard were named among the Redlegs’ best players.

The absence of Lake, and 16-year-old Austin McDonald among others proved too much for Centrals’ Under 18s to cover, as they went down by 87 points to the ladder-leading Redlegs. Matthew Borlace (25 disposals) and Brodie Tuck (11 rebound 50s) were kept busy among an under-siege defence, as Henry Nelligan and Cooper Murley ran riot for the victors. Both accumulated over 40 disposals and booted three goals apiece as the clear best two players afield.

Sturt blew the League finals race wide open with a crucial win over South Adelaide on Saturday, giving the Double Blues a sniff at top four qualification. Among the youngsters afield, Tom Lewis worked hard for 19 disposals, 11 tackles, and a goal, while Casey Voss managed 16 touches, and Adelaide NGA hopeful James Borlase was retained in the lineup. Victorian Daly Andrews (17 disposals) was again prevalent for South, while 17-year-old Jason Horne booted a goal from his 10 touches.

The Panthers got one back in the Reserves in a fighting upset, with recent National Combine invitee Phoenix Spicer named among the best for his two-goal effort. Defensive duo Jack Flett and Harry Spacie also made their Ressies debuts in the win. For Sturt, another Under 18 prospect in Tom Emmett booted two majors as one of the Double Blues’ better contributors, while Josh Shute managed one.

Sturt also took out a win with big finals ramifications in the Under 18s, with Tom Powell (27 disposals, nine clearances, one goal) and Mani Liddy (22 disposals, two goals) again among the numbers. Ned Grieve also chimed in nicely with 10 marks. Arlo Draper continues his strong form through midfield, adding 29 disposals, 10 clearances, and a goal to his name. Draft bolter Brayden Cook was good for 2.3 from 20 disposals, while Max Clifton pumped forward for nine inside 50s.

Reigning League premier Glenelg flexed its muscle to all but seal a finals berth for 2020, consigning West Adelaide to the bottom of the ladder spot. 19-year-old Callum Park was again impressive with 16 disposals, eight rebound 50s and a goal from defence. 15 of his touches were kicks. Luke Parks was another to stand up in patches, taking six marks in his eight-disposal effort. Lachlan Squire worked back into form with 17 disposals for Westies, while recent National Combine invitee Mitchell Duval found it 13 times with four marks.

There was plenty of young and Under 18 talent running around in the Reserves clash. Most notably, Luke Edwards returned to action, running out alongside older brother, Jackson as the Bays went down. The solidly built 18-year-old found the goals, as did teammates Ty Murphy and Mitch Martin. Bailey Chamberlain, who missed out on a combine invite, also booted a major and was named among the Bloods’ best players.

The Under 18s played out a high-scoring contest, with 19-year-old tall Calvin Perks bagging a game-high six goals to lead the Tigers to victory. Kye Dean and Hagan Wright were unsurprisingly the leading ball winners with 31 touches apiece, while bottom-ager Jayden Davis snared a couple of majors from his 28 disposals. Luke Young managed three goals as the most potent West Adelaide forward, while Jye Sinderberry had 19 disposals and five marks up the other end. Cade Kennedy (18 disposals, seven inside 50s) was also valuable.

The ladder leading Eagles bounced back to winning ways against North Adelaide, moving clear once again to lay one hand on the minor premiership. James Rowe was kept to just one goal, but the Eagles had plenty of firepower, while the likes of Rhyan Mansell (22 disposals, seven rebound 50s) and Port NGA prospect Lachlan Jones (16 disposals, eight rebound 50s) generated plenty of drive out of defence. VFL recruit Sam Lowson managed 10 touches on his SANFL League debut.

North pegged one back in the Reserves, helped by key defender Dyson Hilder’s best-afield display. He could be in line to join partner-in-crime Karl Finlay at League level. Under 18 gun Caleb Poulter enjoyed his second Reserves outing for the Eagles, but could not pull his side over the line.

The Roosters also crowed at Under 18 level, as Blayne O’Loughlin (28 disposals) and Matthew Borg (27) found plenty of the ball. Adelaide NGA prospect Tariek Newchurch also bagged two goals in the win. For the Eagles, Jase Burgoyne was again huge with eight clearances from his 27 disposals, while bigmen Henry Smith (15 disposals, 15 hitouts, one goal) and Zac Phillips (11 disposals, 30 hitouts, 2 goals) were also impactful.