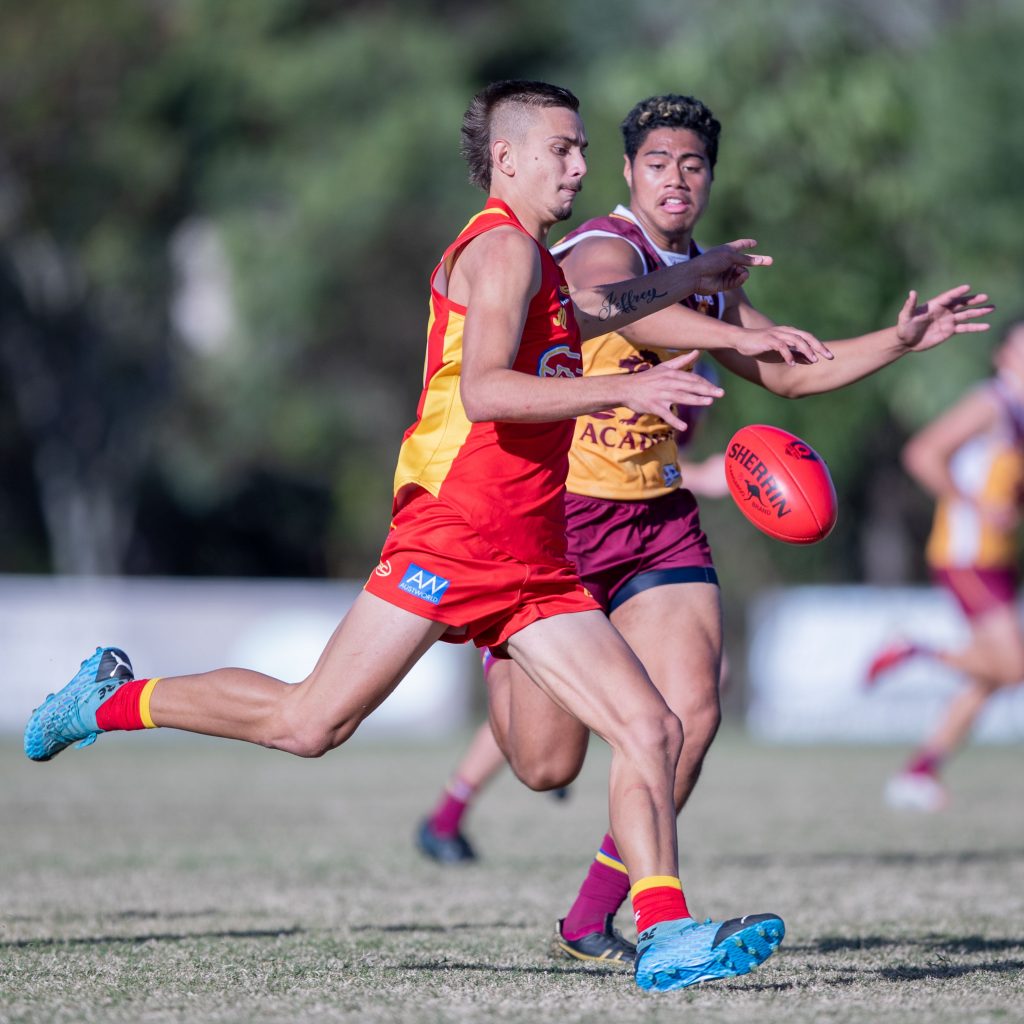 Next under the microscope in our AFL Draft watch is Northern Territory native Joel Jeffrey, an athletic utility with enormous upside. The son of former St Kilda and Brisbane player, Russell Jeffrey, Joel is tied to the Gold Coast SUNS through their access to the Darwin zone. The 192cm prospect has played senior football for Wanderers in the NTFL, and was set to move across to Queensland before the pandemic hit. Able to play either forward or in defence, Jeffrey is a magnificent reader of the ball in flight, and doubles his impact with some serious speed across the ground. He brings terrific x-factor to the table, as demonstrated during his appearances in the 2019 Under 18 National Championships, Under 17 Futures All Star game, and this year’s Northern Academy Series. He looms as a top 25 prospect and has been invited to this year’s National Combine.

Jeffrey is an excitement machine up either end with his marking and running abilities, and proved as much in this game. He started down back and positioned well behind the ball to snap up much of what came his way. Jeffrey’s one-on-one marking was sound too, which is a handy addition to his eye-catching intercept play. While his forward run and long kicks helped him impact the play past the wing, Jeffrey was moved up the other end more permanently to good effect with two goals in the second half. The Wanderers product snuck out the back well on both occasions, marking inside 50 and slotting home with a lovely set shot action.

The bottom-aged NT utility is capable of playing up either end, but looks really useful down back as a good reader of the ball in flight. Jeffrey leapt really well under high balls towards his own defensive 50 and stood strong as packs formed in his area, showing he wasn’t afraid of the inevitable contact. He looked better as the game went on and proved solid in the second half as Metro looked to charge with some one-on-one wins.

Definitely an eye-catching player at half-back. His kicking was hit or miss at times, with his vision and decision making good, but his execution just a bit iffy. His vertical leap one-on-one was outstanding and he is a terrific intercept mark. He does not panic when under pressure and seems to shrug off opponents with ease. He’s a long kick of the football and someone who found plenty of it coming out of defence. Jeffrey reads the ball in flight well and has a nice marking action. Took a huge intercept mark in the third term rising above all others to cleanly grab it in the third term, and then saved a goal with a great running mark back with the flight. Overall a super game in a defence that was under siege for the most part.