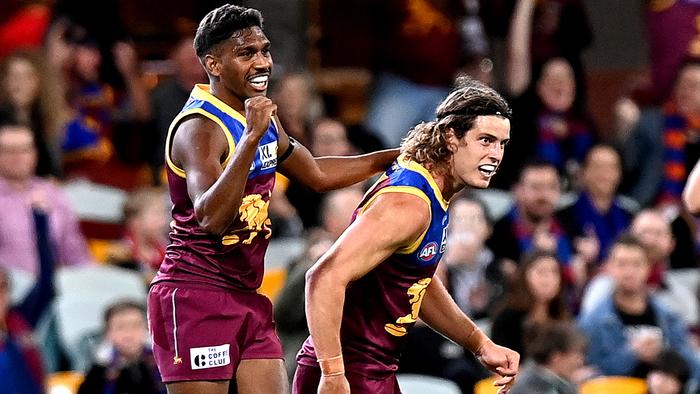 THE NUMBER of recruits from the 2019 AFL Draft to run out for their respective teams on the weekend dropped to single digits in Round 15, with six teams enjoying a bye and a few youngsters being squeezed out of senior selection. There was still plenty to take out of this weekend’s action for the class of 2019, with a bunch of up-and-comers continuing to stamp their mark on the competition. We take a look at how they performed.

The GIANTS did all they needed to against Carlton in a win with few frills, and Ash played his role well against some dangerous Blues forwards. Directly opposed to the likes of Eddie Betts and Jack Martin at different stages of the game, the Murray Bushrangers product held his own, able to match either man for pace and smarts at ground level. He was sound on the ball too, hitting up high percentage options and enabling the GWS defence to take a breather with composed decision making.

Coleman was the sole Lions Academy product Brisbane was able to snap up in last year’s draft, and his journey to the bigtime made for a great story. On debut, the 20-year-old popped up with some nice moments, floating up the ground from his usual forward post to impact the play. While he turned the ball over a few times, Coleman’s attack on the ball, clean hands, and defensive intent all came to the fore in what was a solid maiden senior outing. Lions fans will be keen to see what he can produce with an extended run, though competition for spots will be tight come finals time.

After a promising debut in last week’s win over West Coast, Dow only found a third of the disposals he managed last time out. All of his disposals were handballs, found mostly in the forward half. There will be plenty more opportunities for the Bendigo Pioneers graduate to make his stamp at senior level, but he will need to boost his output to stand a chance of making the grade during finals.

He may have been somewhat of a pick from the blue in last year’s National Draft, but Frederick has added some real spark to the developing Fremantle side. In his return to the senior fold after being managed for Round 14, the South Australian produced much of what fans have come to expect of him, injecting speed to the Dockers’ forward half with his run and tackling pressure. Frederick’s ability to contribute among links towards goal has been a real asset thus far, and that was no different with his four score involvements against Richmond.

Riccardi’s form across his first three AFL appearances has had some analysts suggesting he should have been taken in the first round of last year’s draft. Such calls may yet prove hyperbolic, but the Calder Cannons and Werribee product has looked a natural fit in the GIANTS’ forwardline amid some stiff competition. Riccardi again outperformed the likes of Jeremy Cameron, Harry Himmelberg, and Jeremy Finlayson en route to finishing as the sole player afield to boot multiple goals. His ability to attack the aerial contest and clunk the ball at its highest point has been terrific to watch.

In hindsight, Rivers may well prove to be one of the biggest bargains among last year’s crop, as he continues to look comfortable at the elite level. It was a pretty dour night for Melbourne, going down to a rebuilding Sydney outfit, but the West Australian was again able to find plenty of the ball and generate some forward momentum from the back half.

Adelaide’s opening win for 2020 made for one of the more captivating moments of the season, and their second selection in last year’s draft played his part. The South Australian native has all the physicality to justify his readymade status, and continues to compete well against more mature bodies. While he is primarily known for his midfield craft, Schoenberg also snuck forward to nab a couple of goals as his Crows soared to a 35-point victory.

If he is not leading the race at this point, Serong is arguably among the top three players in contention for this year’s Rising Star award. The diminutive, yet tough midfielder gets it done week in, week out and has proven one of the more consistent first-year players in 2020. Serong has ticked over the 20-disposal mark five times in 11 games this season, and is did so against the reigning premiers while opposed to Trent Cotchin. He is a star in the making, and will only benefit from such an extended run in the Dockers’ senior lineup.