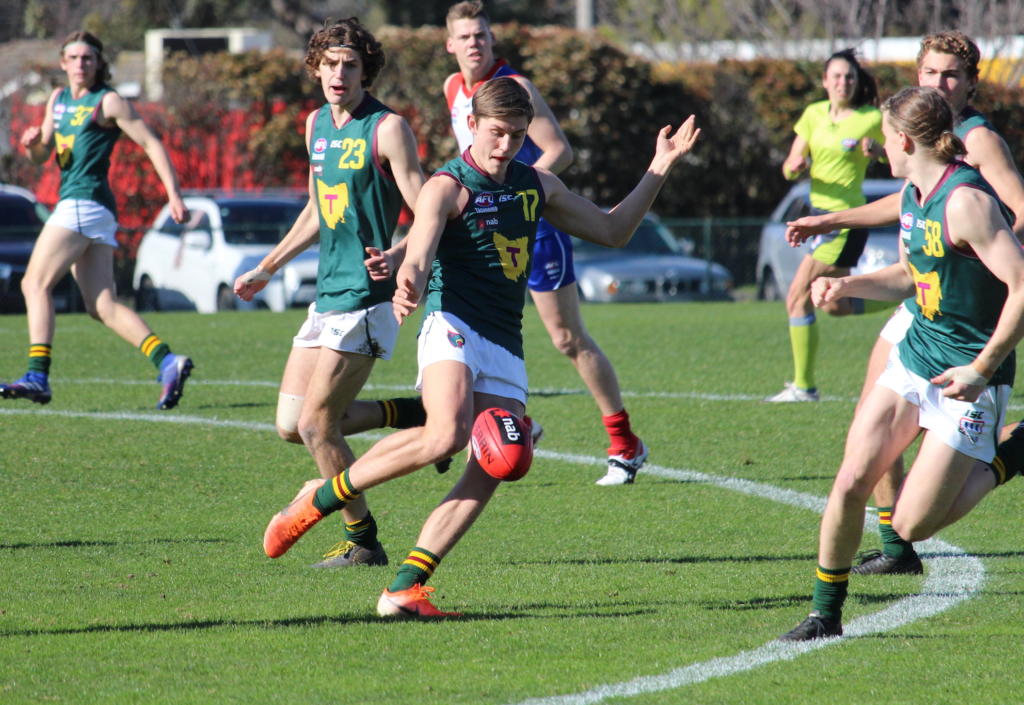 AFTER their respective Round 8 performances, Tasmania Devils talents, Patrick Walker and Jackson Callow come into Round 9 as two of the in-form players. Their sides, North Hobart and North Launceston go head-to-head in a last chance saloon effort for the Demons, and a chance to extend their lead in the top two for the Bombers.

In Saturday’s win over Lauderdale, Walker had a best-on performance for the Demons, picking up 14 disposals at 50 per cent contested, whilst maintaining a solid 57 per cent disposal efficiency. While his disposal count is usually a lot higher, his ability to get down and win the contested ball was a plus, also picking up four clearances and having five inside 50s, spending much more time on the inside.

For Callow, he has had an extended break since last Wednesday night’s win over Launceston. The key position forward has slowly developed into a key position utility, and spent the entire Round 8 match in defence. He was a star back there, racking up 19 disposals, but clunking nine marks – four contested – having four rebounds and three tackles and well as four one percenters.

These two will not go head-to-head in a one-on-one, but are equally crucial to their team’s hopes. Callow could find himself standing on another Devils teammate in Jake Steele, while Walker will likely match up on an experienced Bombers midfielder. If one of them can have a big game, it could be crucial to the team’s chances. North Launceston will start as deserving favourites, but way back in Round 1, the Demons pushed them all the way coming off a wooden spoon last season and with backs against the wall, do not expect North Hobart to go down easily.

Last year: Averaged 16.5 disposals, 3.8 marks, 5.4 rebounds and 2,2 tackles for the Devils in the NAB League playing off half-back.

This year: Has been used in a multitude of roles for the Demons from half-back to wing to half-forward and last week, onball.

Player summary: Walker is traditionally a heavily outside-oriented player with good skills and high upside. He knows how to move the ball and can do some damage, but the next step for him was improving his inside game, which he started to last week.

This year: After starting the year as a key forward, Callow has spent time in defence for a quarter here or there, and last round played the full game at centre half-back where he excelled.

Player summary: Callow was a dominant key forward in the NAB League last season and started that way in the TSL in 2020. His move to defence has been a revelation because versatility was one area he could take his game to another level, already possessing the strongest hands in the game being an elite contested mark and reliable kick for goal.

In other games this weekend, Clarence takes on Lauderdale and Launceston takes on Glenorchy. The fourth placed Clarence can catch up to third placed Lauderdale with a win in what is a massive clash for both sides in their aims of playing finals. The same can be said for Glenorchy who have picked up in the last few weeks, but now take on the top of the table Blues. Launceston is going toe-to-toe with reigning premiers North Launceston at the top of the table, and cannot afford to slip up given the Bombers have a game in hand.

Clarence has a number of bottom-age AFL Draft prospects to look for led by 2019 Under 16s Championships Division 2 Most Valuable Player (MVP), Sam Banks. Possessing great skills and athletic traits, Banks is a barometer for the Roos who can really get them going. After a quiet game last week, the running winger and half-back will be keen to have an impact against the Bombers. Also in the bottom-age category of draft prospects are hulking key forward, Noah Holmes – who shows similar traits to Callow as a strong marking forward – talented outside mover Darcy Gardner, and strong tall defender Baker Smith.

The Roos also have a clear standout in his top-age year with hardnut Oliver Davis a prominent player onball. His work at the stoppages, particularly his quick hands and contested ball winning ability is a feature of his game, and he just has a crack for four quarters which fans love to see. Looking at Lauderdale, and Nick Baker is one who has shown signs over the past couple of years, and while he might be turning 20 in November, he has always been there about with his footy IQ, kicking and positioning among his strengths, while been working on his athletic capabilities. Adrian Kalcovski is a former Eastern Ranges product who only turned 20 at the start of the year. Capable of playing as a midfielder – as he did at the Ranges – or as a forward for the Bombers, the mature-age player has always been a natural ball-winner with some smarts around goal.

For Launceston, Jared Dakin is the one to watch for the Blues, having played a number of defensive roles this season. He has no trouble finding the ball himself, which makes him perfect for odd jobs here and there because he can shut down an opponent and also hurt them offensively. Against the Bombers last week he played forward and looked lively, then had a day out against the Tigers with 19 disposals at 73 per cent efficiency, five marks, three clearances, four inside 50s, two rebounds and a goal in a big win. The other Blues talent to watch who is more raw, is Isaac Chugg who had the eight touches, four marks and one rebound, but it is his impact-per-possession that can often hurt teams. He ran at 75 per cent efficiency, and possesses an elite 20m speed (2.93 seconds) and agility score (8.04 seconds). Those traits alone along with his skill has earned him consideration this year.

The Tigers have a more experienced line-up on hand, and a couple of AFL experienced players in Kieran Lovell and Mackenzie Willis, who unfortunately were unable to save the TSL’s bottom-placed side from a heavy loss against the Blues. Considering the appeal for mature-age draftees in a compromised draft year, clubs might consider the former two-game Hawk who is also a former Tasmanian MVP and All-Australian at Under 18s level. Lovell is too good for state level, racking up 20 disposals and seven clearances in the loss last round, which came off a lazy 28 disposals, nine clearances and inside 50s the week before.