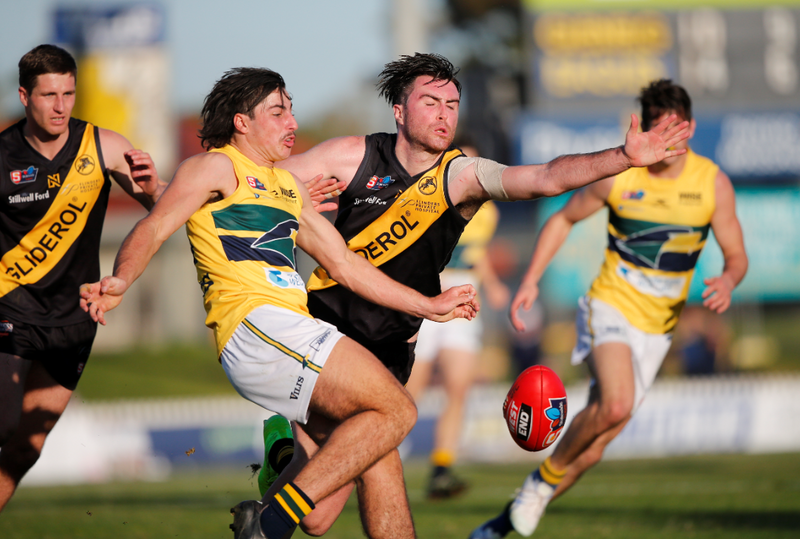 ROUND 11 of the South Australian Football League (SANFL) is set to see a number of youngsters take the field to ply their trade for their respective teams across the weekend as Draft Central brings to you a new weekly preview format, highlighting some of the best up-and-comers who will be out to impress with each passing game. In this edition, we zone in on the talented youngsters taking the field across all three major divisions.

Sturt midfielder Tom Powell could get his first opportunity to impress at League level after he was named on the extended bench for the Double Blues’ Saturday afternoon clash with South Adelaide. After battling with injury for parts of 2019, Powell has dominated the under-18 competition this season, averaging 36 disposals and nine clearances per game. He will be hoping to join fellow draft hopeful James Borlase in the senior side, after the Crows Academy prospect retained his spot in the line-up.

Talented Panthers utility Zac Dumesny and key defender Tom Highmore will spend at least another week on the sidelines as they recover from ankle injuries. Bottom-ager Jason Horne will feature in the South Adelaide league side once again, after he was named on the half-forward flank, whilst wingman Daly Andrews will play his third game for the club after crossing from Victoria.

Strongly built defender Harry Spacie, clean-kicking half-back Jack Flett and speedster Phoenix Spicer have all been named in South’s reserves side to face the Double Blues at Peter Motley Oval. At under-18s level, Mani Liddy and Will Spain are once again set to lead the Sturt onball brigade against the likes of South Adelaide’s Max Clifton, Arlo Draper and Brayden Cook.

Central Districts will be bolstered by the return of 18-year-old Corey Durdin after proving his fitness during the week. Durdin last played in the clubs Round 8 meeting with Sturt, where he suffered a hamstring strain. Wingman Jack Toner has kept his spot in the Bulldogs league side, along with goal-sneak Jordan O’Brien, who is set to join Durdin up forward. Norwood defender Daniel Fairbrother will be looking to build upon his impressive League debut, after being named on the interchange bench for the Round 11 clash.

Bulldog Lachlan Grubb will be joined at reserves level by Brodie Lake, who has been elevated after performing well for the under-18s since crossing from the Northern Territory. The talented duo will take on fellow teenagers Michael Cavallaro, Jack Saunders and Ben Ianniello, who have been included in Norwood’s reserves side.

At under-18 level, Norwood will be hoping for big games from ever reliable midfielders Cooper Murley and Henry Nelligan. After racing out of the blocks and emerging as the team to beat in the under-18s, the Redlegs have lost their last two matches and will be looking to get back onto the winners list when they host a Central Districts side led by impressive 16-year-old onballer Austin McDonald.

Promising defender Luke Parks and his namesake Callum Park are both set to play vital roles in defence for Glenelg when they host West Adelaide. However they will not be faced with the challenge of nullifying Bloods tall Riley Thilthorpe, with the talented draft prospect set to spend another week on the sidelines as the club manages his workload.

With Brodie Edwards named in the under-18 side, the Edwards-clan have a son playing for Glenelg across all three levels this weekend. Edwards and the likes of Hagan Wright and Kye Dean will be looking to put an end to Glenelg’s run of five consecutive losses when they take on the Bloods, led by Edward van den Berg and Luke Young.

The Roosters and Eagles will meet on Sunday afternoon in a top-of-the-table clash. Potential first round draft pick and Port Adelaide academy prospect Lachlan Jones will again suit up at league level, having impressed all season with his speed, leap and physical presence across half-back. Rhyan Mansell and Lachlan McNeil have become integral components of the Eagles side this season down back and in the midfield respectively. Roosters tall defender Karl Finlay has been equally as important for North Adelaide, often tasked with handling the oppositions best forward.

Eagle Caleb Poulter retains his spot in the reserves after making the step up last weekend. The usual suspects will take their place on the field for two of the under-18 competition’s in-form sides. The Roosters, fresh off a big win over Glenelg, will be looking to get the ball into the hands of skilful Adelaide academy prospects Tariek Newchurch and Blayne O’Loughlin, with Matthew Borg and James Willis set to handle the grunt work in the midfield. Port Adelaide have a couple of prospects in this clash too, in the form of Eagle midfielders Jase Burgoyne and Taj Schofield. The tall duo of Zac Phillips and Henry Smith could also cause some problems for the North Adelaide defenders.