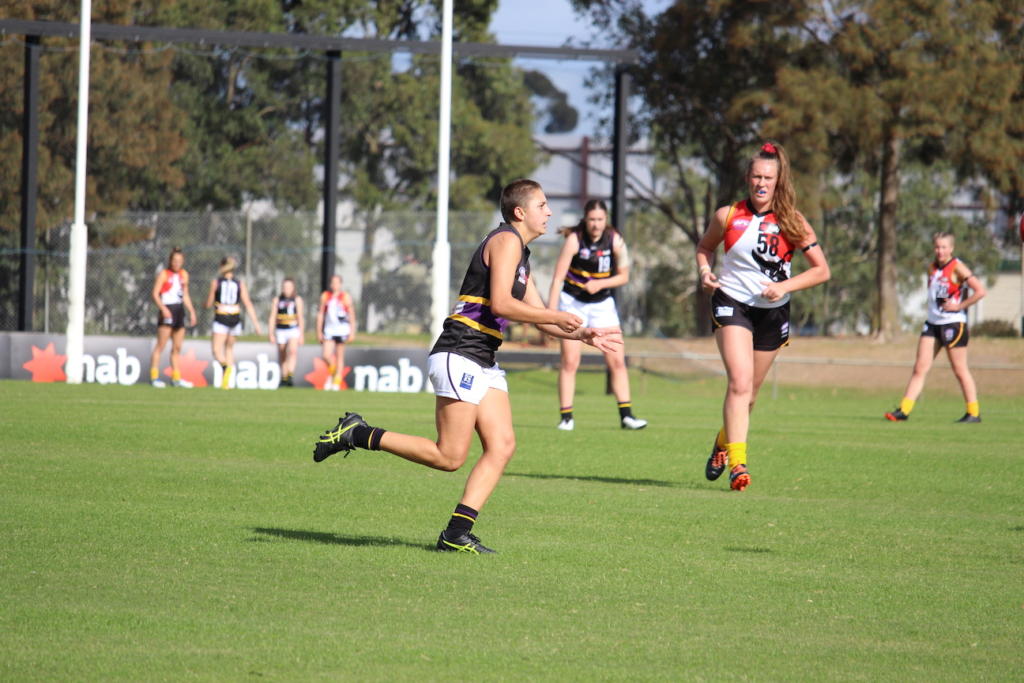 WHEN talking about sacrifices made to play Aussie rules football, there is not much that Murray Bushrangers and Eastern Allies’ Abby Favell has not done to pursue her dream of playing AFL Women’s.

“I started playing AFL in a primary school competition called ‘Paul Kelly Cup’ in year 5 and 6,” Favell said. “There was no outside of school competitions for girls in my area and there still isn’t today! “Once I got to high school I played in my school team, filled with girls that just wanted to give the sport a go or get out of school for a couple of days. In year 8 I was asked to go trial for CCC and was lucky enough to be selected.”

With significant road trips to and from not only games but also training, there is no denying that Favell is committed to making her dream a reality and has had a huge football journey that has led her to where she is today.

“During the pre-season and in-season, my parents drive me three hours (one-way) once or twice a week just to get to training in Wangaratta,” she said. “Playing in Melbourne meant a six-hour drive and an overnight stay which was taking a lot of time out of their lives just so that they could let me play the game that I love. “The travel for me isn’t so bad as I’m not the one driving and now with a few more girls from the Leeton area playing with the Bushies, the road trips are very eventful with weekly competitions on who could provide the best snacks. “The commitment wasn’t easy but many amazing people made it possible.”

“Football for me is just something different. “It is a game that allows me to run around with very few restrictions which is what I enjoy most. “With a lot of experience in other sports and other pathways, football has been the one that has made me look forward to going to camps and the one that has given me the best experience. I also love the bit of contact that you don’t really get in other sports.”

Like many, Favell has had her setbacks – missing out on selection and making tough decisions about other sports – but says that she has come out of it stronger, credit to her drive to continue to build her game but also fulfil her commitment to the sport.

“At the next level, trialling for NSW, everyone from my school that trialled was selected, except for my friend and I,” Favell said. “It was a setback in my football journey but it just made me stronger as I went away and trained harder to be selected in the team the next year. “After playing for NSW at the school nationals in Perth, I was certain that I wanted to play AFL.

“In 2018, I was selected through the Southern Sports Academy to play for NSW against VIC in under 16s. “The Bushrangers also asked me to play a few games for them at the end of the season. “In 2019, the Bushrangers asked me to join them for a full pre-season and I was honoured to be selected which resulted in the tough decision to give up the many other sports I was playing. “But luckily it was the right decision as this led to my selection in the NSW team and the Eastern Allies under 18 teams as a bottom-age player.”

When it comes to her footy journey, Favell’s consistency in the Murray Bushrangers saw her get a bottom-age berth at the AFL Women’s Under 18s National Championships, recording an average of 11.0 disposals, 2.7 marks and 2.7 tackles for the Eastern Allies and finding her footing against many familiar Murray faces who took the field for Vic Country.

“Playing in the Eastern Allies team was an experience that I didn’t really know what to expect and it was one like no other,” Favell said. “The girls on my team were absolutely amazing and made the on field and off-field time fun. Playing against my Bushies team mates was actually really fun but very different.”

Playing against strong opposition from across the country, Favell proved that she could handle the pressure and used her clean hands and high work rate to impact both on and off the ball. Her efforts across both the NAB League competition and Under 18s Championships saw Favell entered into the AFL Women’s Academy, participating in training camps with the Academy squad.

“I remember the phone call and feeling very shocked,” she said. “I definitely thought that Ash (Moeller, AFL NSW/ACT Female Talent Manager) was just telling me he put my name in but nothing was certain. “The academy camp in Darwin was definitely not easy but overall it was a lot of fun and I learnt a lot that has and will help me along my football journey. “We had spent a week training with the GIANTS beforehand and that was certainly something that I am never going to forget as I was privileged to meet so many amazing players and people.”

Speaking of players Favell felt privileged to meet, GIANTS midfielder Alyce Parker has had a profound impact on the youngster, and is someone that Favell says she admires both on and off the field.

“She is an amazing player that is always working hard and trying to become better,” Favell said. “As a rural girl, she has shown me that anything is possible and it doesn’t matter where you come from, it’s the opportunities that you make. “Not only is she an absolute gun but she is also a wonderful person as she has also taken time out of her day to message me or stay in touch.”

A speedster with the ability to rotate through a number of positions – though ultimately looking most comfortable winning ball through the midfield – Favell also has clean hands to win the ball across the field and has great run and carry in transition credit to her endurance and never say die attitude.

“My strengths I feel would be my running and decision making skills,” she said. “I have been a cross-country runner and I guess a combination of all my other sports has enabled me to love to run and cover a lot of the ground… I’ve been focusing on doing the basics really well like taking the ball cleanly with my ground balls and giving it off on the up, hitting targets by both hand and foot. “I completed the NAB League training program we were all given and continued to work on the basic fundamentals, kicking, clean hands, ground balls etc along with playing netball and training with my local footy team.”

Favell said that while her commitment to her football dream has certainly impacted on her studies and other commitments, she has managed to balance it fairly well with plenty of commitment and strategies in place to ensure her schoolwork did not suffer.

“My strategy was to complete assignments and homework on the road between training or games as it was my only free time,” she said. “It was challenging when we were in the middle of nowhere with no service … but I managed to make it work and hand all my assessments in on time, just. “My family and friends mean a lot to me and they understand just as much as I do the commitment that I’ve made as I have had to miss my best friend’s birthday and my grandparents anniversary, just to name a few, due to playing or training. “I try my best to keep everyone happy but those that mean most to me understand the dedication I have made and usually save me a piece of cake.”