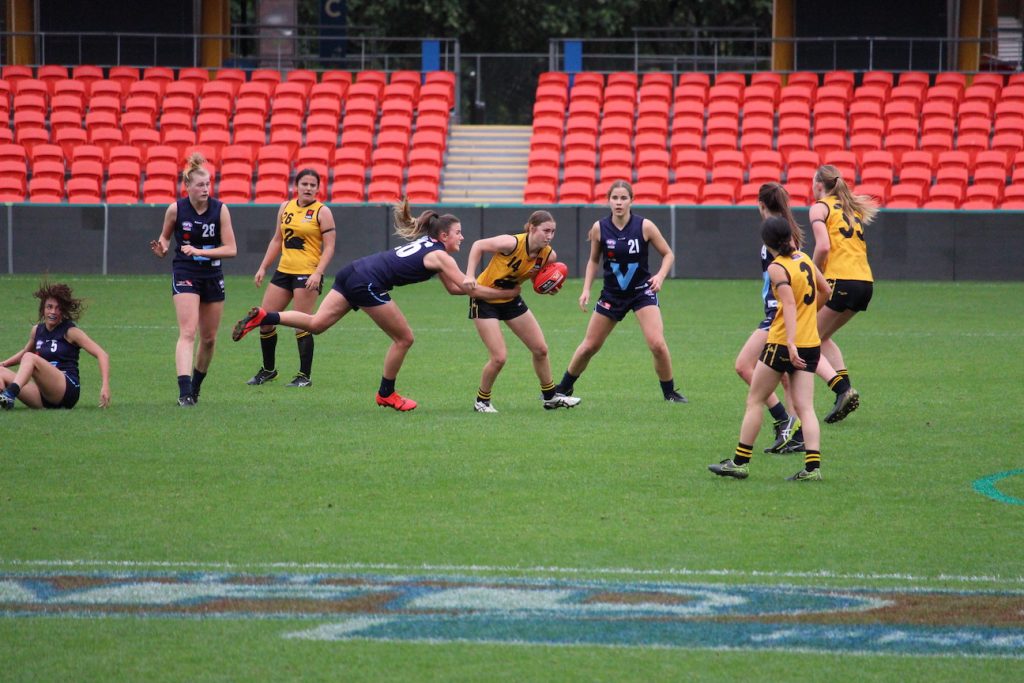 FOOTBALL has always been a constant for Peel Thunder youngster Sarah Verrier. Unlike many other potential AFLW draftees who were introduced to footy later in life, Verrier has been involved in the sport for as long as she can remember.

“I’ve been playing football since I was in Auskick,” Verrier said. “I was about five years old and have been through it all with my family, so that’s how it started off and I just kept going.”

Sporting ability runs deep in Verrier’s DNA, as her three older siblings have all made their own mark in different fields.

“My eldest brother Steven got drafted to Richmond back in 2012 and played there for a bit as a rookie,” she said. “My sister Haylee is pretty good with boxing and went to the World Championships for that, and my other brother Brendan played football locally for South Freo but was forced to stop due to concussion symptoms – he is now a personal trainer and loves doing that.”

Steven was taken by Richmond at pick 43 of the 2012 Rookie Draft and was at the club until the end of 2013. Going through the AFL experience has made him a great person for Verrier to turn to for advice.

“[Steven] has taught me to love the game,” she said. “If you want to get somewhere, you have to work for it, it’s not just going to come to you.” “He says the AFL experience is hard work, and you just have to do the work.”

Verrier’s parents have also been incredibly supportive of her AFLW dream.

“My dad has been training me and helping develop my footy, and my mum has been taking me to trainings and letting me do what I love doing,” Verrier said. “They have both been a massive support for my career and I appreciate them a lot.”

Verrier initially played the sport to engage with friends, but eventually her enjoyment of the game took over.

Like a lot of other girls, Verrier was forced to play mixed competition at a young age to develop her craft. She played for the Kwinana Knights, who did not have a girls team at the time.

“I started with the boys, but had to stop when I was about 11 or 12,” she said. “I went in the girls competition from there with a move to Peel [Thunder]. “Luckily Peel had a girls team at the time!”

Verrier has stayed loyal to Peel through her whole junior career and appreciates what the club has done for her.

“Peel have helped me a lot with how I play my footy and, especially being there since I was 12, I have stuck around and a couple of the girls that I started with are still around as well,” she said. “Everyone still loves it.”

Verrier is a member of the 2020 National Women’s Academy and has previously represented her state at the AFL Women’s Under 18 Championships, an experience that she treasured.

“It was amazing,” she said. “Not a lot of people get to compete on an AFL-sized ground like Metricon, especially girls, so having that experience was great.”

With kicking ability and footy smarts being Verrier’s two biggest on-field strengths, there is an obvious position that she is suited to.

“I’d say half-back is my best position, it’s where I’m playing at the moment,” she said.

Being a Fremantle supporter for AFLW, Kiara Bowers is a major inspiration for Verrier given the physical and mental challenges she went through en route to becoming the elite player that she is today.

“She’s been through a couple of knee reconstructions and was unable to play for a while,” Verrier said. “Her pushing to get that first AFLW game thanks to her commitment through those years is why I’d say she’s my biggest inspiration.”

When asked what the future holds for Verrier and her footy, there was only one possible answer.

“AFLW is where I want to get to,” she said. “I’ve been dreaming since I was five years old and hopefully soon I’ll get there.”

At this stage, Fremantle and West Coast appear to be her options.

“I’m happy to stay in Perth and stick fat with my family, maybe later on I can start thinking about moving and that kind of stuff, but for now I would be happy to stay here,” she said.

For the next month, Verrier’s AFLW dream is on the backburner as she is focused on trying to win a premiership at Peel. Her side went into the final round fifth on the ladder, but a tight nine-point win over Claremont propelled them to second spot. This will be their first finals series in the WAFL women’s competition.

“In the last year we’ve come from the bottom of the ladder and now we’ve finished second, so we’ve been happy with the improvement and it’s been fun, just playing footy and being able to win some games,” she said. “All the girls are loving it and hopefully we can keep it going and get to the grand final.”

Peel faces minor premiers Subiaco for a chance to play in the decider. The Lions got the better of Peel three weeks ago by just over a goal, but Verrier has faith that her side can get the job done.

“We only just lost to them, so we are pretty confident going into this week’s game on Sunday afternoon.”

Verrier was among those named to test in the AFL Draft Combine, which will be held on September 30 in Western Australia.