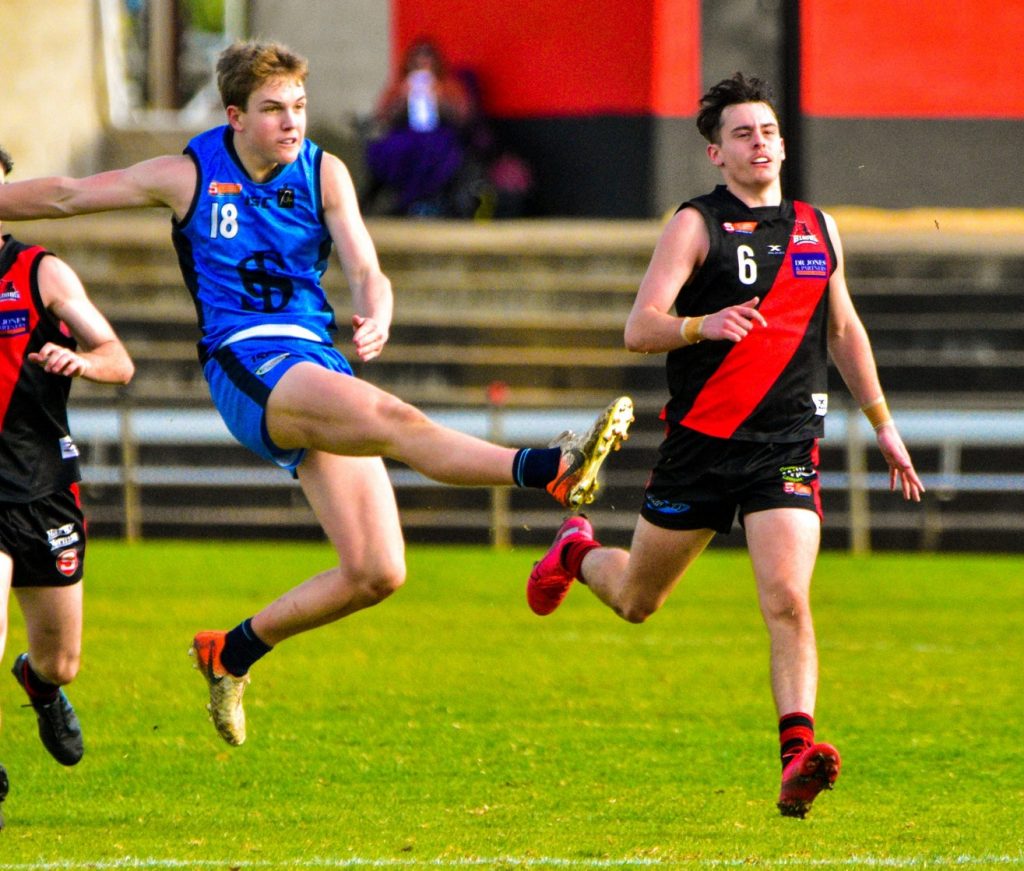 STURT midfielder Tom Powell has taken the SANFL under-18 competition by the scruff of the neck so far in season 2020. In doing so, the teenager has announced himself as one of South Australia’s most promising draft hopefuls. As of Round 10, the inside midfielder is averaging a competition-high 36 disposals and nine clearances per game, for a Sturt side currently sitting at the top of the Under 18s ladder. Powell’s football journey has followed a traditional pathway, enrolling in Auskick at a young age before eventually joining the underage ranks at the Unley Jets, the same junior club as Collingwood ruckman Brodie Grundy and Richmond bigman Callum Coleman-Jones.

“I began playing school football when I moved to Scotch College in Year 8 and played right up to Year 12,” Powell said, who first donned the iconic double blue of Sturt at under-13s level. “Playing as a midfielder has always been my best and most preferred position, and I rotate through a high half-forward role each quarter at Sturt which helps build my craft around goals. “I like to think I work hard to find the ball which is maybe why I get a few disposals but the next step for my game is being able to use it better and be more damaging.”

Having finished his schooling at Scotch in 2019, Powell began studying commerce at the University of Adelaide this year.

Powell has been a driving force behind the Double Blues’ successes to-date, but it hasn’t been all smooth sailing for the on-baller, who was forced to battle through injury last season.

“I had an issue with my hip last year which hindered my performance a little bit, but I had an operation on it in mid-October last year and it feels as good as new now,” he said.  “I was recovering from surgery throughout the Christmas period and the first two SA Academy Hub camps which was quite challenging. “(But) I tried to stay involved and help the team off the field wherever I could and still learnt a lot from the coaches and the other elite players during this time which was very beneficial for me.”

Powell’s surgery meant he had a disrupted start to preseason training, but then the COVID-19 pandemic hit, postponing the start of the SANFL season.

“This allowed me to have a longer preseason from January to March and complete a bit of extra rehab to make sure my hip had great strength and was in prime condition,” he said.

Powell described himself as “pretty easy going and relaxed” outside of football, but his performances on the field have been anything but.

“I think the key things for me have just been making sure I never miss any training sessions and when I’m training, to do it at full intensity so that I can keep improving,” he said. “Playing with a great team and coaching staff at Sturt has also allowed me to find a bit of form so I’m grateful for that.”

In Sturt’s recent Round 10 victory over West Adelaide, Powell ran amok, amassing a staggering 47 disposals, two goals and ten clearances in a performance which further ignited calls for a League debut.

“I don’t like to look too far into the future, but I enjoy training with the seniors and hope to get an opportunity at some stage as I know it will help improve my footy, playing against bigger bodies,” Powell said.

The 180cm Powell identified his cleanness at ground level and quick handballing skills as some of the strengths of his game.

“I’m not a super fast player, so being clean gives me a bit more time to make decisions and get the ball out to my teammates from stoppages,” he said.

Despite living in South Australia, the teenager has supported the Gold Coast Suns since Gary Ablett signed with the Queensland club, and models his game around Brisbane ball-magnet Lachie Neale and Collingwood superstar Adam Treloar.

“They use their hands around stoppages really well and I would like to implement a bit more run and carry as well as improving my ability to hit the scoreboard like these players do,” he said.

Powell has worked hard on his tackling technique throughout the season, after recognising it as an area for improvement ahead of his top-aged season.

“I also think if I were to increase my off–ball running and endurance it would make me a better player as a whole and help the team more,” he said.

The midfielder is one of the leading prospects in a talented South Australian crop set to lock-horns with Western Australia in the coming months.

“Riley Thilthorpe is a fantastic player and an especially good leader amongst the SA Hub group and Luke Edwards and Mani Liddy are challenging to match up against in-game and at training,” he said. “I’m quite close with Lewis Rayson (Glenelg), Henry Nelligan (Norwood) and the Sturt boys too,” Powell said.

Although a date for the AFL Draft is yet to be announced, Powell insists he is taking things one game at a time and only worrying about what he can control.

“If we can hold on and make finals, obviously winning a premiership with my teammates at Under 18s level would be awesome,” Powell said. “I’ve had a couple chats with some (AFL) clubs but they’re mainly just trying to get to know me as a person, so it’s pretty relaxed.”

Having worked hard to overcome his injury concerns, the prolific ball-winner is now reaping the rewards of resilience and persistence. He was among those named to test in the AFL Draft Combine, which will be held on September 30 in South Australia.