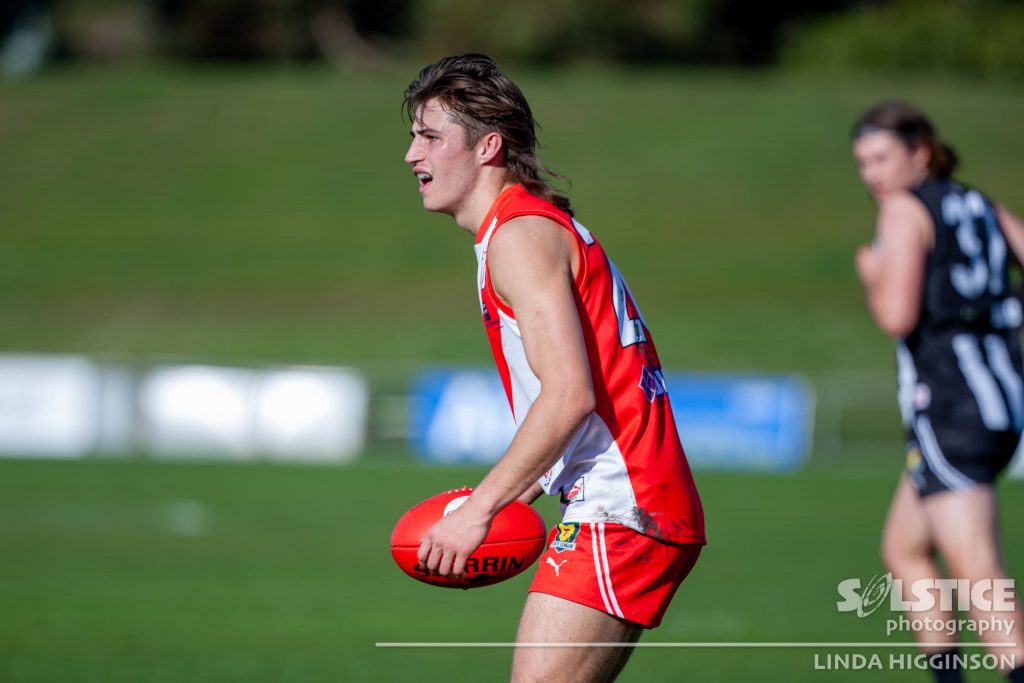 THE final three matches of Round 8 action completed on the weekend with Glenorchy and Lauderdale bouncing back with important wins, while Launceston took out its frustrations from the loss to North Launceston with a 96-point shellacking of last placed Tigers.

Glenorchy claimed a vital win in their hopes for finals this season with a 39-point triumph over Clarence. The matched ebbed and flowed throughout the first half with Glenorchy leading by 15 points at the half, before piling on four goals to two int the second half in a 12.9 (81) to 7.10 (52) victory. Callen Daly booted three goals, as Jaye Bowden (two) and Mitchell Rainbird (two) were both named among the best, as was Ryan Banks-Smith. For the Roos, Chris Nield and Sam Green both slotted a couple of majors, while playing coach Jeromey Webberley, Ethan Jackson and Oliver Davis (one goal) were named among the best.

A quieter day from the talented teenager, but it did not stop him having an unforgettable goal in the second term, dribbling one home amongst traffic from the boundary line in the 24th minute. He had an earlier shot on goal from 40m out in eighth minute of the first term, but it drifted to the right. He finished with the nine touches and three inside 50, but crucially four one percenters.

He has had more influential games, but Davis was still very impressive in Clarence’s loss. He played in his usual role onball and had the second most touches for his side with 19, but it was his tackling pressure that stood out. He put his body on the line and would win a couple of free kicks for being pushed in the back and then laying a tackle of his own. One of his free kicks received on the wing was helped with back-to-back 50s for ill-discipline from the opposition and he popped it home from the top of the goalsquare. Davis’ best strength as you can see week-in, week-out is his contested ball winning ability, but most of all within that facet, is his ability to get his hands free in a tackle. He has a neat short kick and works hard for his disposals, covering the ground well.

After a busy start, the bottom-aged Banks had a quieter outing. He showed good pressure in the opening five minutes in defence, laying a strong tackle and not giving away the free kick despite coming in at speed. He pushed back into defence to help out at times and after a quiet second term, won it early in the third with a long kick from half-back to half-forward and then used the ball well at half-back to go forward. His handball at half-back started a chain of possessions for the Roos that ended up in a goal to Nield up the other end. Loves to get involved in running plays, and whilst he still needs to iron out that consistency for four quarters, he catches the eye with his ball use and running ability.

The bottom-age key forward looked like he was in for a big day with a great one-on-one contested mark in the goalsquare 12 and a half minutes into the match. He protected the ball drop, marked two metres out and kicked truly. He was worn like a glove by the opposition, and realistically should have had a second major nine minutes into the term. He won a free kick in front of goal, but Nield opted to take the advantage and kick his second instead. Holmes’ quick hands set up Keren Howlett for an important goal in the 12th minute of the second term, then had a chance for a major himself but his 40m set shot drifted for a behind. Holmes’ strong mark on the wing in the final term showed his work rate with a clean grab, but unfortunately missed his target in Davis and put it out on the full. His field kicking could definitely improve, but his work rate and contested marking – two from three of his marks were contested – were both highlights.

The bottom-ager probably played one of the best four-touch and three-mark games you will see. Standing at 192cm and 79kg in the pre-season, Smith is a touch under the key position height, but is strong enough in the air to match it with bigger opponents. In the match, those stats are not a typo, he had the four disposals and three marks, but two of those marks were contested, and he had five one percenters – the third most on the ground. The word synonymous with Smith is courage, and while he is not the most athletic player out there, he reads the play well and just plays his role defensively, coming across with a timely spoil in the final term to punch it out of bounds.

Lauderdale conceded the first two goals of the game during its win over North Hobart, before piling on the next eight, and leading by 32 points at half-time. The Bombers kept the foot down after the main break, kicking four goals to one, to win 12.10 (82) to 4.5 (29). Luke Nelson (four goals) and Adrian Kalcovski (three) both showed their VFL experience in front of the big sticks for the home side, while Rhys Sutton and Nick Baker were named the winning side’s best. For North Hobart, Julian Dobosz slotted two majors, while Callum Kilpatrick and Baxter Norton kicked the other two goals. Patrick Walker, Norton and Michael Fisher were nominated as the Dees’ best in the loss.

In an important win, Baker was one of the Bombers best coming out of defence, juggling a nice balance of offensive and defensive traits. He has had much bigger games in terms of his own personal performance, but he did what he needed to do within the team game plan to have an impact. His disposals – 10 were down on his best efforts – but he had six one percenters, often pushing a higher line up the ground to be on the defensive side of the centre more so than in the back 50. This reflected in a number of both rebounds and inside 50s, working hard up and down the ground. Baker often looks for the handball receive and pump long with his raking long boot and an intercept in the last term led to a scoring opportunity which unfortunately became a behind rather than a major.

Showing off a new number from his traditional #49, Collins was been well watched by the opposition forwards. He was held and won a free midway through the first term, and then judged his timing with his possession off half-back to hit Jye Menzie on a wing. He copped a knock close to quarter time but was fine to go, and took a strong contested mark early in the second term. Collins showed great courage throughout the match to put himself in front of a charging pack of players, then pushed forward from that moment to win it at half-forward, quickly pass it inside 50 but it was spoiled away. He does well in one-on-one situations and intercepting the play, and showed good run out of defence in the final term, pushing up to the win midway through the quarter to take a strong grab. He finished with the 14 disposals, five marks – two contested – five rebounds and two inside 50s, with just a little cleaner ball use the next improvement.

Tried hard all day but could not have the same impact he has when North Hobart is attacking regularly and looking dangerous inside 50. The talented forward usually oozes X-factor, but was forced to go hunting for the ball up the ground, and while he still won plenty of it, did not have the same impact on the game as he normally would. He had a couple of “almost moments” such as midway through the final term paddling the ball in front of him, got tackled, got up, won it again and snapped from the boundary inside 50 but it unfortunately went out on the full. His low bullet pass inside 50 to Kilpatrick nine minutes into the second half was his most deadly touch.

Of the top-age draft eligible players, Walker was certainly the best in this game, and played more of a four quarter effort than he has in past weeks. Most importantly, Walker’s biggest knock is his contested ball-winning ability, and he went a little way towards suggesting he is not completely outside when given the onball opportunity. Seeing him start at stoppages was great and he actually ran at 50 per cent contested from his 14 touches, and still managed 57 per cent efficiency. It might not have been his cleanest effort for what he is capable of with his ball use but he still had the greatest impact on the match for his side. He covered the ground well and as he showed in the second term, had a lovely lace out kick inside 50, then moments later took another good mark, spun around out of trouble to trick his opponent and hit up Dobosz leading out at him. To pick up four tackles and five inside 50s and even lay a couple of tackles was what really stood out, because while he turned the ball over on occasions, he tried to keep the ball moving and continuing to build his inside game is going to be the best way forward for his overall balance on the field. An impressive game.

After losing earlier in the round, Launceston showed no mercy against last placed Tigers, dominating with a 17.12 (114) to 2.6 (18) victory. They booted the only six goals of the first half to race to a 38-point lead by half-time, before Tigers finally kicked a major in the third term. By the end of that quarter though, the Blues had let loose and piled on another eight goals, then won the final term three goals to one during the 16-goal shellacking. Dylan Riley slotted eight goals in a mammoth effort up forward, while playing coach Mitch Thorp and Jay Blackberry booted three goals apiece, all outscoring the opposition by themselves. Tyler Carter was a lone hand up forward for Tigers, booting the two goals. Elijah Reardon and Ben Donnelly were nominated as the Tigers best in defeat, while Blackberry, Riley and Fletcher Seymour were impressive in the navy blue.