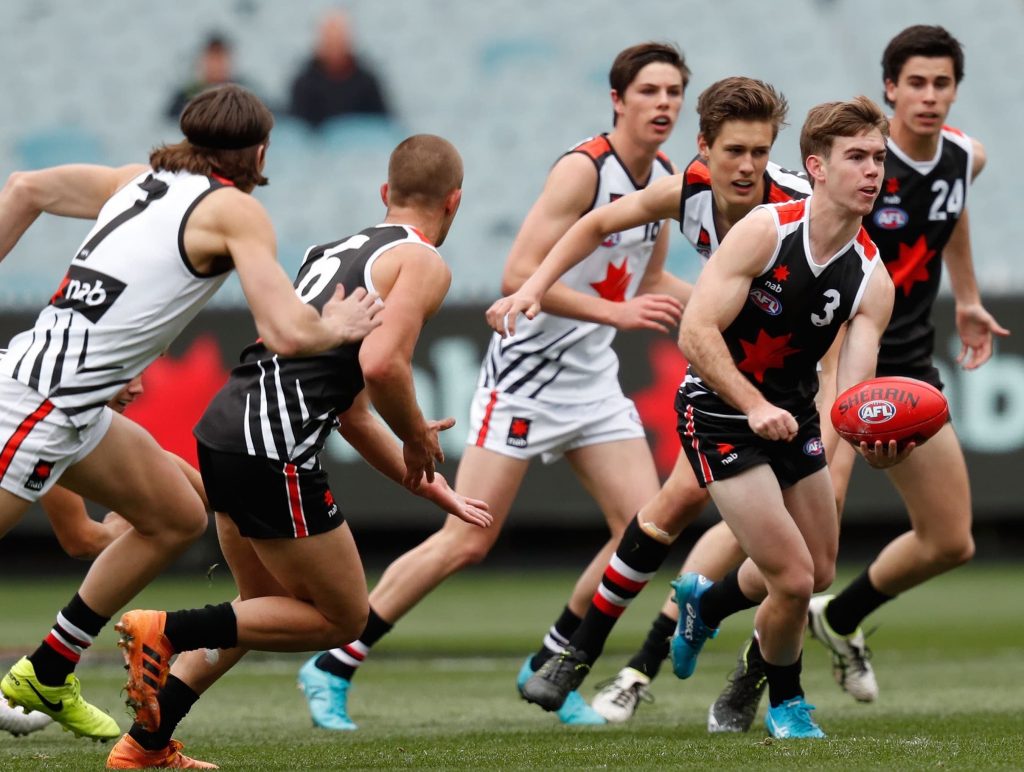 THE TOP junior prospects from South Australia rolled on into Round 10 of the SANFL Under 18s competition, with a number of standouts continuing to emerge. In this edition of Caught the Eye, we have compiled a list of the best and most promising performers from across the Under 18s competition this past weekend, with one representative from all eight SANFL clubs. For extended profiles on each relevant player, click on their names highlighted in red. For our full Round 10 scouting notes, click here.

Our scouts said: “The Port Adelaide father-son prospect pieced together another polished performance across the wing for the victorious Eagles. His precise kicking was a standout, along with his vision, smarts, and ability to take his time with ball in hand and assess the situation before making a decision. Schofield also showed a couple of nice tricks, including a well rehearsed ‘dummy’ and swift side-step.” – Tom Wyman

Verdict: Schofield has made a promising return from injury, collecting over 20 disposals and hitting the scoreboard across his two outings this past fortnight. This kind of output is arguably what the 18-year-old offers at his best, an a solid month of similar performances should put him in great stead come draft time. Hopefully he gains an extended run on the field towards the back-end of the season and continues to show what he is capable of. While he had eyes on a more inside-oriented role, Schofield seems a touch more damaging on the outer, as shown on Saturday.

Our scouts said: “Talented bottom-ager, Murley was one of his side’s best in the frustrating loss. Starting in the middle, Murley was then shifted to the forwardline later in the opening term… Murley’s speed was obvious and his high endurance and relentless work-rate allowed him to get on the end of several handball chains across the ground… Despite his smaller frame, his natural talent ensured he was still a threat at stoppages and around the ball.” – Tom Wyman

Verdict: It has been no surprise to see Murley tear the Under 18s competition to shreds, and he continues to look a class above after 10 rounds of action. While there is no rush, Norwood is a club renowned for the faith it shows in young talent, so don’t be surprised to see Murley add to the Under 18 talent injected into the Redlegs’ senior sides. He is still a bottom-ager, and quite light-on, but has all the skill, tenacity, and work-rate to adapt to any forthcoming promotion. Fellow Under 16 All Australian Jason Horne has been earning all the plaudits of late for his work at League level, and Murley is not far behind on pure talent.

Our scouts said: “While he sometimes lacks the strength and speed to burst away from congestion, the 16-year-old has no trouble getting his hands on the ball in the first place, and looks tidy when disposing under less pressure… He has the inside game, but was also clever on the outer with some nice drawing handballs and accumulation around the ground. Another pleasing part of McDonald’s game was his tackling, which has come to the fore in recent weeks.” – Michael Alvaro

Verdict: It’s easy to forget that McDonald is not draft eligible until 2022, such has been his level of consistency competing two years above his age-group. The massive run he has had not only as part of the Central Districts lineup, but as a key cog in the midfield will put him in great stead for the next two seasons. As alluded to in our scouting notes, McDonald will benefit from physical development in future, while finding targets and becoming more damaging on the exit of stoppages will also make him a more impactful player overall.

Our scouts said: “(Draper) was quiet in the early stages, but came into the game with some deft touches in congestion, while also showcasing his terrific agility and awareness to weave through traffic and come away with the ball in style. A couple of centre clearances attested to that, though his strength when caught was also evident. Draper’s work to accumulate at either end of the ground helped him have a more sustained impact.” – Michael Alvaro

Verdict: Another under-ager who continues to shine is Draper, whose talent has come to the fore over the last fortnight on the back of additional midfield minutes. He may not rack up bucketloads of disposals, but the 17-year-old looks comfortable in contested situations and pops up with moments of magic – weaving his way out of traffic with grace and agility, while also hitting targets on the break. At 185cm, Draper is still a touch light but has the potential to become a strong inside midfielder, while also possessing great versatility with his work as a forward. A classy mover to watch for next year’s draft.

Our scouts said: “Wright looked the most dangerous for Glenelg all day, providing run both in the midfield and off half-back. He was active at most stoppages and contests, timing his runs well to get on the end of hit-outs and handball receives. The Bays were keen to get it in his hands as he moved smoothly on the inside and outside, generally using the ball well. Moving out of defence, where the ball so often was for Glenelg, looked simple for Wright as he so calmly weaved through traffic and displayed good evasive skills.” – Eli Duxson

Verdict: It is no secret that Glenelg’s squad depth has been tested in recent weeks, but the challenge has allowed a bunch of other talented movers to take centre stage. Wright is one of many Tigers to continually put his hand up in the absence of some of the Bays’ stars, and is steadily proving his own worth. He is a good size already and possesses a nice balance of inside and outside traits, while also being able to provide productive possessions.

Our scouts said: “With patches in the midfield, (Newchurch) showed he was capable of so much more and could play as a midfielder with his speed and cleanliness, but it was not on show for as much of the day as you would have liked. He looked to work back hard defensively, but it was his attacking run that was most exciting after roving well and running with ball the best part of 60 metres to goal from almost on the goal line.” – Eli Duxson

Verdict: This is the kind of performance that should be expected from Newchurch, who showed off some of his best form on the weekend. The Crows NGA prospect simply needs to churn out this output more consistently, and some added midfield time would also go a long way to proving his class around the ball. There is no question about his nous inside forward 50 though, as Newchurch constantly finds a way to hit the scoreboard. He can be as damaging as any player available this year and has great upside.

Our scouts said: “Liddy might have been overshadowed in the stat-line by game’s end by partner-in-crime Tom Powell, but make no mistake, he was just as influential, if not more so at times. His strength at the stoppages to win the ball, stand tall and get his arms free was a feature of his game, but he also has that touch of class about it too. He does the hard stuff then can add the touch of class, having a number of shots on goal out of forward stoppages.” – Peter Williams

Verdict: Our scouting notes suggest as much, but Liddy has been an outstanding member of Sturt’s Under 18s side this year, even if his exploits have been somewhat overshadowed by that of a certain returning teammate. He and Powell have formed arguably the competition’s best midfield partnership, dominating around the stoppages with their ability to extract possession. Liddy has a few ‘wow’ moments, mostly credit to his strength on the ball, but may need to adjust that style once he comes up against more mature bodies. Still, his numbers on the weekend are nothing to scoff at, and he has the potential to hurt the opposition going forward too.

Our scouts said: “Really stood out for mine in terms of West players and produced the performance he is capable of at half-back. Not only did he do his job one-on-one, but he provided drive, held a high line, and even went into the ruck for a few stoppages. His pressure and one-percenters would have been high, even if he did not officially lay a tackle. He worked hard on a number of occasions to get to the front position and read the ball in flight well.” – Peter Williams

Verdict: Sinderberry makes the cut for this piece a second week running, despite not reaching the heights of his return game last time out. The pure numbers may not stack up, but Sinderberry did his draft stocks no harm with another promising outing where he showcased terrific versatility and class among a struggling side. His intercept game across half-back is outstanding, with sound use by foot and the ability to roll further afield adding strings to his bow. May well be in for a big end to the year.