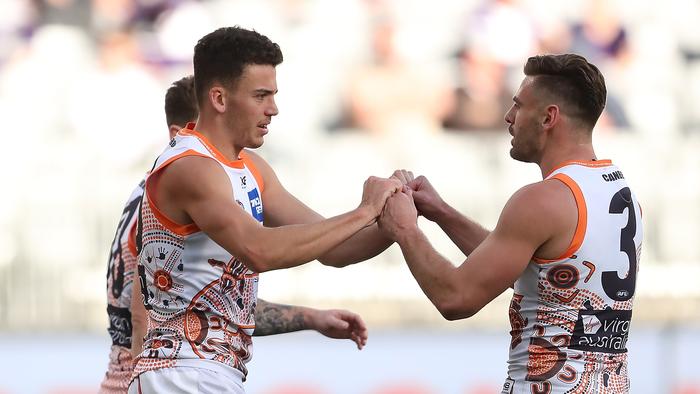 THE NUMBER of recruits from the 2019 AFL Draft to run out for their respective teams on the weekend again crept into double digits, despite a few youngsters being squeezed out of senior selection. There was plenty to take out of Round 14 for the class of 2019, with a bunch of up-and-comers continuing to stamp their mark on the competition, and Thomson Dow making his debut. We take a look at how the best handful of them performed.

Building on his 16 disposals, 10 marks, and two goals on debut last time out, Riccardi went about further proving his doubters wrong with a phenomenal four-goal performance against Fremantle. The 20-year-old mature age draftee fired up forward alongside fellow key forward Jeremy Cameron, who also booted four majors as the GIANTS rejoined the winners list. Riccardi is quickly repaying the faith shown in him by the GWS recruiting staff, keeping Jeremy Finlayson out of the side in the process. Working from his station inside forward 50, the Calder Cannons and Werribee Tigers product wowed fans and pundits alike with his overhead marking and ability to convert, drawing comparisons to some of the greats of the game in terms of aerial presence.

Last year’s number two pick has arguably returned a handful of performances worthy of Rising Star nominations this season, and continues to thrive after his Round 7 nod. Anderson ticked over 20 disposals for the second time in three games, as he and his SUNS teammates got back to their best in a win against North Melbourne. Accumulating all the way across midfield, inside and out, the Oakleigh Chargers graduate again showcased his terrific balance of traits, and the kind of impact he is capable of imposing forward of centre. A classy running goal put the cherry on top of his quality outing.

One of the more consistent Hawks in a rare down season of late, it is easy to forget that Day remains in his maiden campaign at AFL level. The South Australian picked up another 16 disposals and again used it at an efficient rate (81 per cent); not only plugging in as a safe outlet across the back half, but also generating some momentum in transition. Day’s intercept marking and sharp kicking have been his greatest strengths thus far, and he was certainly kept busy in the second half as Essendon ran over the top to hand Hawthorn a ninth loss in 2020.

It was a memorable weekend for the Dow family, as Thomson made his AFL debut with Richmond, while Blue brother Paddy returned to Carlton’s lineup. After 14 rounds, the Tigers finally unleashed their 2019 first round pick and allowed him to gain some valuable midfield experience. Dow looked relatively comfortable in the clinches, getting his hands on the ball early and finishing with 12 disposals, which included three clearances. In time, his speed and explosiveness should come to the fore and allow for a greater weight of bursting kicks away from the contest.

It has been surprising to see Rivers managed so often this season, as he constantly looks so comfortable at AFL level when given a chance. In the Dees’ inspired win over St Kilda, the West Australian recruit again proved his worth with some eye-catching plays down back. His mix of speed, composure, and efficiency by foot made for a reliable package as Melbourne worked to catapult forward from its own half. Rivers has plenty of weapons to suggest he’ll be a mainstay in the side, and a real asset at that for years to come.