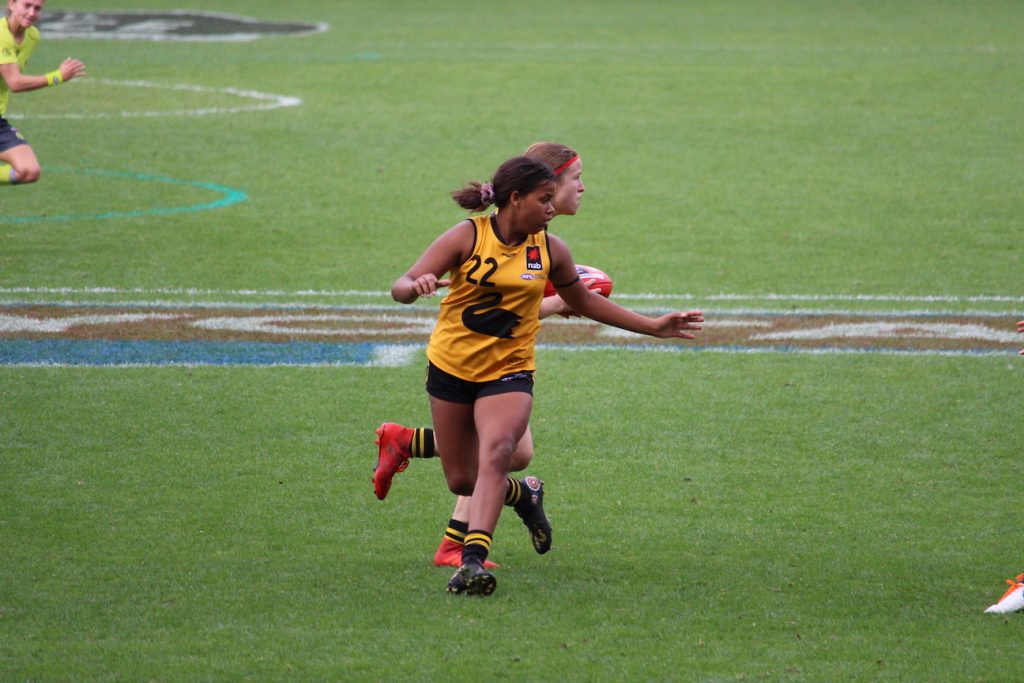 RENOWNED for her ability to light up the footy field with her explosive speed and fancy footwork, West Australian product Nyra Anderson boasts an exceptional story of resilience and hard work hailing from a rural town and working her way up through the ranks to follow her love for football.

A very proud Indigenous woman, Anderson sees her football as an opportunity to encourage other young Aboriginal women in particular, to follow in her footsteps and not to be afraid, instead jump on each opportunity that comes their way.

“I grew up in probably a real low, disadvantaged community,” she said. “So, opportunities what I’m getting hopefully girls have the opportunity to do exactly what I’m doing. “I really try and get that out publicly, as much as I can.”

Anderson expressed her desire to use her platform as a footballer to be a face for the Indigenous community and create more pathways for girls to succeed.

“Just where the place I grew up was just girls didn’t really have a pathway was just mainly boys so now that we have a pathway, I want girls to take every opportunity,” she said. “Even if it is not football. “Even if it is just going to school, getting help through that or getting your L’s like getting a job or something like that. “Just girls take on every opportunity that they can, take the help, don’t be scared.”

Growing up in a rural town, Anderson did not have a lot of opportunities to ply her trade on the footy field, or if she did, she had to compete with the boys. But that did not stop the 18-year-old who first picked up the footy at a very young age as her family fostered her love for the game.

“It’s all I ever really wanted when I was a kid,” Anderson said. “My dad just gave me a footy and then started playing when I was little. “When I was about four or three, and then grew up. “Couldn’t really afford to play in any clubs, so I just played school footy with all the boys and then got to Year 7 and saved up and then I joined the state team and made the state team.”

Still at such a young age, Anderson has impressed across a wealth of different leagues highlighting just how damaging she can be on the footy field and her ability to not be overawed by the bigger bodies.

Swan Districts has played a significant role in Anderson’s football development with the youngster crediting their caring nature as a focal point throughout her time with the club.

“It’s been pretty good yeah I love how it’s so family orientated,” she said. “They’re a really down to earth club and understand any financial issues, family issues that we have so it’s pretty good.”

An incredibly talented young player, Anderson plied her trade at the AFL Women’s Under 18 Championships last year, donning the Western Australia guernsey to not only showcase her football smarts but so too leadership qualities despite only being 17.

“It was a really good experience for my leadership and to work on my game and then just try to get drafted really,” she said.

Not only did Anderson get the opportunity to play for Western Australia, but so too the chance to play in Queensland and most exciting of the lot, run out on Metricon Stadium, something her family touted as “inspirational”.

With speed to burn Anderson pegs fitness as an area she hopes to improve on before getting drafted while her strengths lie in her ability to read the play and contest in one on one situations given her ability to “put [her] head over the ball and get it out”.

“Really first just to make AFLW and then give back to my community as much as I can because they really need it,” Anderson said. “I’m pretty versatile wherever the coach puts me and now it’s just, I adjust to wherever I am and play to my ability really.”

Anderson has also spent time with Fremantle, training with the midfield group and honing in her craft alongside some notable names in the AFLW world, something she hopes might become a reality one day soon.

“It was a good experience like a taste of AFL was at my fingertips so I’m hoping for the best in the future,” she said.

With the AFL Women’s Draft around the corner, Anderson has proven she has the skillset to be a handy inclusion in any side.