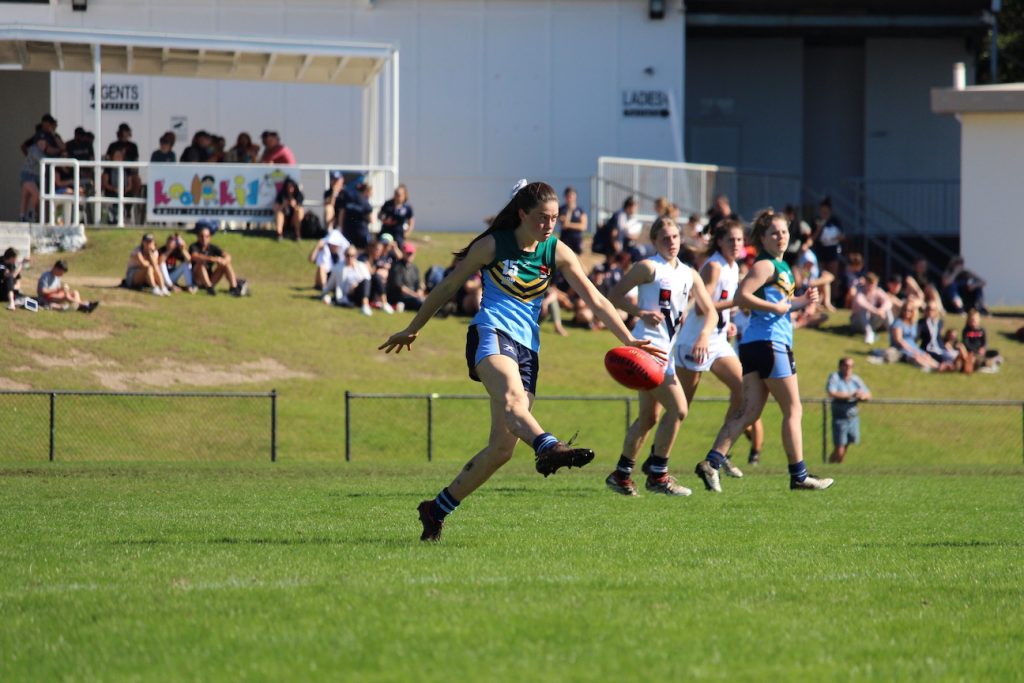 BELCONNEN AFL Women’s Draft prospect Emily Pease has been chasing – or more accurately running – towards a dream at the highest level for some time. The heptathlon specialist who specialised in middle-distance running has found herself a dual passion over the last six years, this time with an oblong ball and 21 other “lifelong friends” on gameday.

“I started out when I first moved to high school,” Pease said. “I made a couple of friends and they were playing for the local club and they said ‘why don’t you come along and join in?’ so I went along, tried out and loved it so just kept going from there and had the help of all my junior coaches, especially Scott Reed, especially getting into all the Academies and all of that so really it just progressed from there and kept going step by step really.”

Pease said it was the close bond between teammates and trust in the coaches that kept her in the sport. The emphasis on ‘team’ rather than ‘individual’ was something that drew Pease to what she describes as a “super fun game to play”. That is not to say she did not enjoy being a state representative at national level in athletics.

“It was really good, because my older sister did it as well so I had all my friends my age and then there were people who I knew who were older, and that also was a really good community to be around because everyone has their different strengths,” Pease said. “Everyone gets along and you see them all the time, it’s a pretty small community so you make a lot of good friends through it so it’s good.”

But in the end, it was that team emphasis that ultimately won Pease over to choose football, especially knowing she had reached the national level there. Last year she represented the Eastern Allies at the AFL Women’s Under-18 Championships, and was named in the AFL Women’s National Academy. Having already been an athlete, the fitness side was a ticked box, but she admitted the biggest change in the endurance side of things was having to improve the 20m speed. The team aspect though was clearly the biggest change for the teenager overall.

“That would probably be one of the main differences (team aspect),” Pease said. “You have all these people around you on your team helping you to achieve your goals but in athletics it’s really individual, so however much effort you put in, your result is really just up to you it doesn’t have the impact of those around you whereas footy you have your whole team around you supporting you, helping you to achieve one goal.”

At times, Pease would train up to six or seven times a week with some days doubling up between her athletics and footy. It did not worry her, as she reached the Australian National Championships where she finished third in the heptathlon, but realised that there “wasn’t any step up” because the next step was an under 20s age group. Instead, she chose to focus on her football.

On some occasions when Pease would rock up at footy training after an athletics session, she would have to ease off a bit to ensure less fatigue, but the fact she could still participate only added to her love for the game.

“Most of the time I would do everything the same as everyone else,” she said. “But sometimes with our fitness stuff we would have different levels depending on the fitness of the girls, so if I was tired from a running session or something I could drop down to one of the lower groups. “So still be involved in the team aspect but not have to push myself as much because I’d already done a session.”

A Belconnen Magpie through and through, Pease said she would not want to be anywhere else. In fact, the club was thrown into the spotlight last year when the GWS GIANTS plucked competition best and fairest, Maggie Gorham out of the league as their first draft selection.

“It was awesome, everyone was so happy for her (Gorham),” Pease said. “Our whole team got around her heaps and it was really cool to see someone from your own team go because it does show you that anything’s possible I know. “We’re just from Canberra it’s just a small state but really if you’ve got the talent you can go all the way.

“I love it. “My club is amazing really. “I think it is, my coaches have always been helpful, my teammates have always got around me. “I reckon it’s just a really good community and I don’t reckon I’d really want to go anywhere else.”

Last year’s AFL Women’s Under-18 Championships was a humbling experience for Pease, who said the NSW/ACT Rams and Eastern Allies programs had really helped her develop her game. Along with the experience of playing against the best players, she knew she had made some friends for life.

“The coaches have always been really helpful and everything and then the girls are just amazing, everyone gets around each other, you don’t know each other for that long but you really do make lifelong friends through it which I think is really cool,” Pease said.

“It was crazy. “Especially the first time you run out, bit nerve wracking on the big grounds and everything but once you get into it, it’s just amazing being out there with the crowd and all the girls around you and just seeing some of the girls from other teams who are absolute jets who are just killing it. “It’s really cool to see, especially up close.”

Pease is one of three players from the AFL Canberra league in the AFL Women’s National Academy, with Queanbeyan Tigers duo, Tarni Evans and Jayde Hamilton also striving to achieve their dream. The trio have become closer given their shared bond, and the interstate trips have helped.

“Yeah I definitely think it has (become closer), but also we already knew each other and we’ve played together and things before, but having those trips away you really get to know other people and I reckon through that time we’ve all come a bit closer,” Pease said.

The defender-cum-midfielder likes to take advantage of her middle distance running ability, taking the game on off half-back, then pushing into the midfield. Pease said her running and kicking accuracy were among her strengths, with her tackling technique and stoppage positioning among the areas she is focusing on. In her top-age year, Pease has spent more minutes onball and has enjoyed the time through there for the Magpies. But wherever she plays, the talented footballer is just enjoying being out on the park in such uncertain times.

“Yeah I reckon it is a bit of a privilege,” Pease said. “My whole team and everyone was taking it game by game, because you never really know what’s going to happen but it’s really cool we’ve been able to play five rounds already and hopefully get to play a couple more so we are very lucky down here.”

From here on, Pease said her goals were just to keep improving her skills and getting cleaner across the board to be a more all-round consistent player. It is no surprise that being drafted into the AFL Women’s competition is the number one goal.

“Yeah it definitely would be,” Pease said. “For most of the girls playing, especially for people like Tarni and Jayde that’s definitely the goal at the moment. “But you’ve just gotta keep going and seeing what happens.”

As for an inspiration along her journey, Pease said it was more about returning the faith that her family, friends and coaches had put in her to help her along that journey.

“I reckon not really as much of an inspiration but more of a I want to show to my parents and my coaches that the work that they’ve put in to help me has paid off and I can make it as far as I can really,” she said.