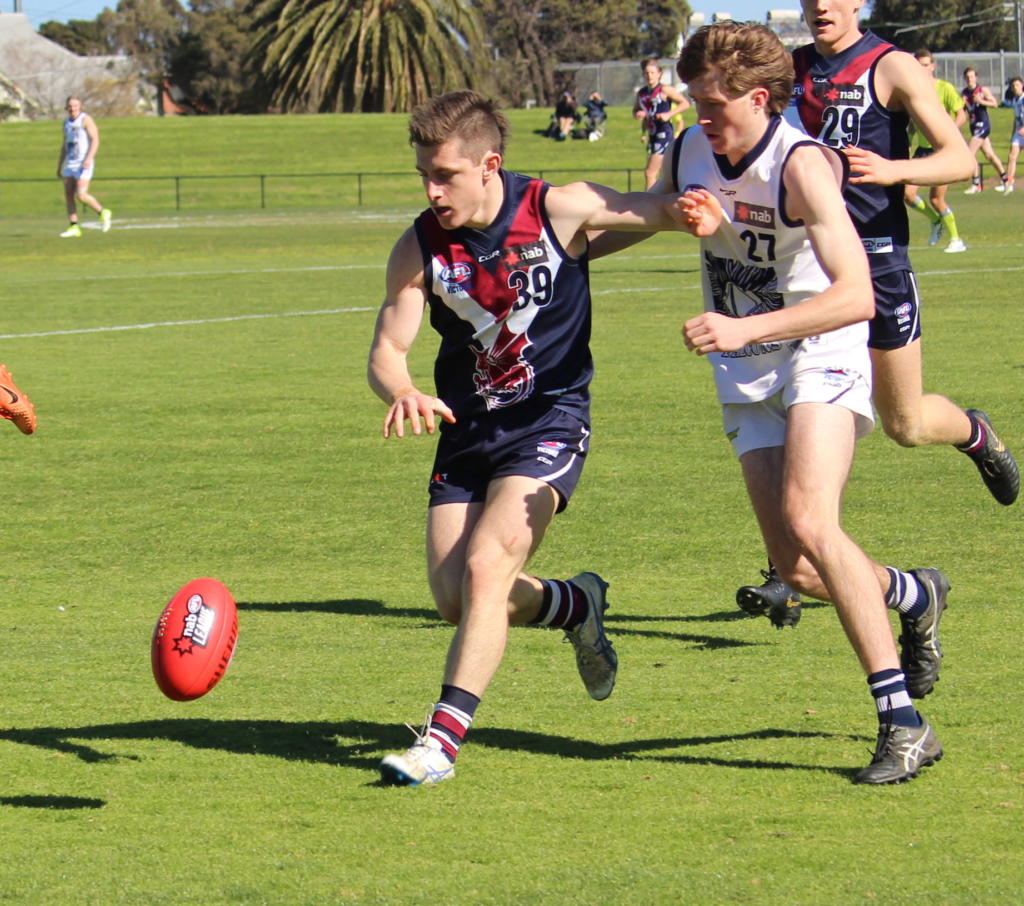 IF you are missing footy like we are, then let us somewhat salvage that with a look back in our series of Classic Contests. In today’s contest we look at another clash between the NAB League rivals to complete our full series, and today’s battle is between the Geelong Falcons and Sandringham Dragons. In this edition, we wind back the clock just over a year to when the two sides played out a thriller on neutral territory.

The Geelong Falcons and Sandringham Dragons have played out some epic NAB League (formerly TAC Cup) encounters over the years. In our latest Classic Contest, we’ve opted to relive their most recent meeting, a two-point thriller which saw blustery Ballarat conditions wreak havoc on the scoreboard.

The Round 10 clash saw two sides in very different form come together; with Sandringham riding out some mid-season inconsistency and a raft of team changes to sit second (6-2), while Geelong was beginning to unearth its bottom-aged cohort after a 1-6-1 start to the season which saw them placed 16th on an extended competition ladder. The Falcons had lost three-consecutive games, a far cry from Sandringham’s three wins in its last four outings.

But the country region threw the form guide out into the Ballarat wind and proceeded to kick ahead early, managing three goals to nil in the opening term, and extending its lead to 26 points at half time. Given Sandringham had managed just 1.7 to the main break, the margin seemed like a mountain too high.

Having found their kicking boots during the second interval, the Dragons came out in the third term with three goals to remain a fighting chance at reigning back the Falcons. It seemed they would need more than another three-goal period to get over the line, and while 10 behinds helped, a hat-trick of majors still proved vital in seeing Sandringham home. Final minute minor scores from Archie Perkins and Jake Bowey made up the difference between the two sides, as the Dragons snatched victory from the jaws of defeat.

Perkins and Bowey ended the game with a combined 0.8, but made up for it with some stellar forward momentum to help Sandringham kick into gear. Geelong duo Charlie Sprague (three goals) and Oliver Henry (two) accounted for over half of their side’s score, as the game’s sole multiple goal kickers. Fellow Falcon Charlie Harris led all comers with 27 disposals and a goal, while Angus Hanrahan (26 disposals) was Sandringham’s leading ball winner. Lachlan Smith was named Geelong’s best player in the defeat.

The Falcons would go on to finish 15th of the 18 teams to compete in last year’s NAB League, with their 3-11-1 record pitting them against Sandringham once again in Wildcard Round. The Dragons (fourth, 9-6) dismantled their less experienced opposition to the tune of 103 points, played on another neutral ground in Preston City Oval. Sandringham’s 2019 run was brought to a half by eventual premier, Oakleigh in the preliminary finals.