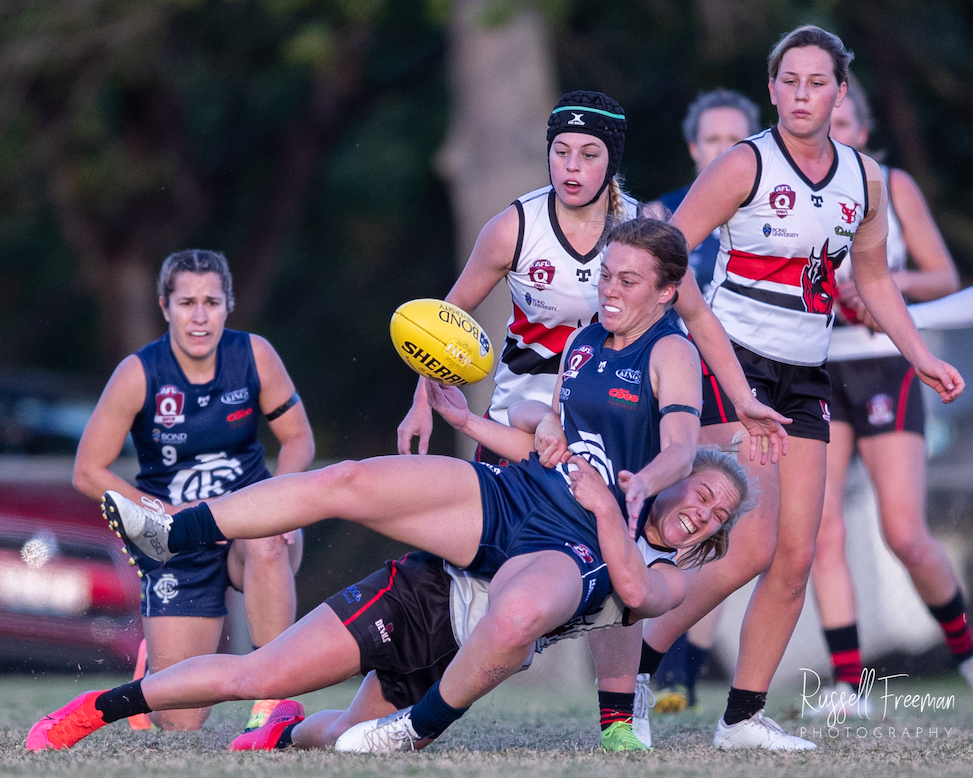 THE penultimate round of Queensland Australian Football League (QAFL) Women’s action gets underway on Saturday, in what will ultimately determine the final makeup of the finals series for the most part. The top six could well be decided following Saturday’s games if the favourites all win, but a top of the table clash keeps things interesting in regards to the minor premiership.

The only certainty coming into the weekend is that Aspley Hornets will not contest the 2020 QAFL finals series, but Wilston Grange has a glimmer of hope if the Gorillas can win the final two games and hope University of Queensland drop them both. The top five is settled, it will just be the order to be determined, with Bond University guaranteed a top three spot, but with a tough fortnight – against Yeronga South Brisbane and Coorparoo in the run home – there are no guarantees they get the week’s break in finals.

The Kings need to take care of Wilston Grange first if they are to get a week off, expected to beat the Gorillas, but will need to topple the Sharkettes in the final round if they are a chance. Even then there are no guarantees, with Coolangatta Tweed tipped to defeat University of Queensland this weekend and have Aspley Hornets net week. In fact the Bluebirds would be very comfortable with how they are sitting, knowing that the weekend’s top two battle will allow them to potentially hold second spot heading into the last round.

The other team that booked its finals spot last weekend was Maroochydore, and the fifth placed side is unlikely to make top two unless a host of near-impossible results occur. However the Roos can still make a play in the post-season series, with matches against the bottom two sides, Aspley Hornets and Wilston Grange in the last fortnight. If they win both chances are they will move up at least a spot or two depending on other results, which means they should face off against a lower-ranked opponent. Third spot is key as the sixth placed University of Queensland – the third placed elimination final opponent – will be 10 points adrift of the top five, with the five sides relatively even.

The key for Coolangatta Tweed is to win and win well, and by doing so can grab and likely hold second spot if Bond University triumphs over Yeronga South Brisbane. The Bluebirds have plenty of experience with Leah Kaslar, Sally Riley and Kate Surman all amongst the top players, as Kitara Farrar and Paige Parker have also shown their class this season. Dakota Davidson remains the key target up forward for the Red Lionesses with 11 majors this season, while Megan Hunt, Jamie Stone and Jane Childes have been among the best players in the competition despite the sixth placed ranking thus far.

The match of the round is clearly the top of the table clash between the Devils and Sharkettes. Whilst Bond University’s percentage will almost certainly see them retain top spot even with a loss, the Sharkettes cannot afford to drop both games in the last fortnight. A host of young guns such as Annie Muir, Lauren Bella, Annise Bradfield and Maddison Levi are all impressing at state league level, while Taylor Smith has been a target up forward with 11 goals in eight games, including a four-goal haul. Lexia Edwards and Lucy Bellinger have been lively for the Devils booting eight goals apiece, but the experience of Sam Virgo, Jacqui Yorston and Jordan Zanchetta has shone through for Yeronga South Brisbane.

To remain in the hunt for top two, Coorparoo must win against Wilston Grange after going down to Yeronga South Brisbane last week. Jade Ellenger is in blistering form for the fourth placed side, named in the best seven of a possible 10 times this season. Emma McKenzie has held her own alongside AFL Women’s guns in Emma Zielke and Jamie Stanton who remain huge reasons why the Kings can take out the flag. Having won only the one game since round one – against the Hornets – form is definitely against the Gorillas getting up in this match. Lucia Liessi has six goals to her name and leads all-comers, whilst Kaitlyn Day remains the clear standout player with nine bests in 10 games, while Catherine Zvarc – is from six – and Kristen Tyquin – five from nine – also remain the clear best from Wilston Grange’s perspective.

Maroochydore will want to build form heading into finals, while Aspley is keen to grab a win on the board in the second last round. The Hornets have ben much more competitive of late and would eye this as a potential win especially with the tough Coolangatta Tweed in the final round. Lauren Kreis has been the leading goalkicker with four majors this season ahead of Michaela Campbell (three) and Rachel Crawford (two). Courtney Daniec has not missed a beat as the only player to be named among the best in 10 games. Isabella Kotatis and Lucy Pengelly are also amongst the Hornets best, showcasing the youth the bottom placed side has. Maroochydore finally snapped a winless streak since the break with a victory last round, and will hope to build into finals. Shannon Campbell (seven goals), Ashleigh Hales (six) and Mikayla Pauga (six) have all been impressive in front of the big sticks, whilst teenagers Lily Postlethwaite, Isabel Dawes, Bella Smith and Chloe Gregory remain lively around the ground.