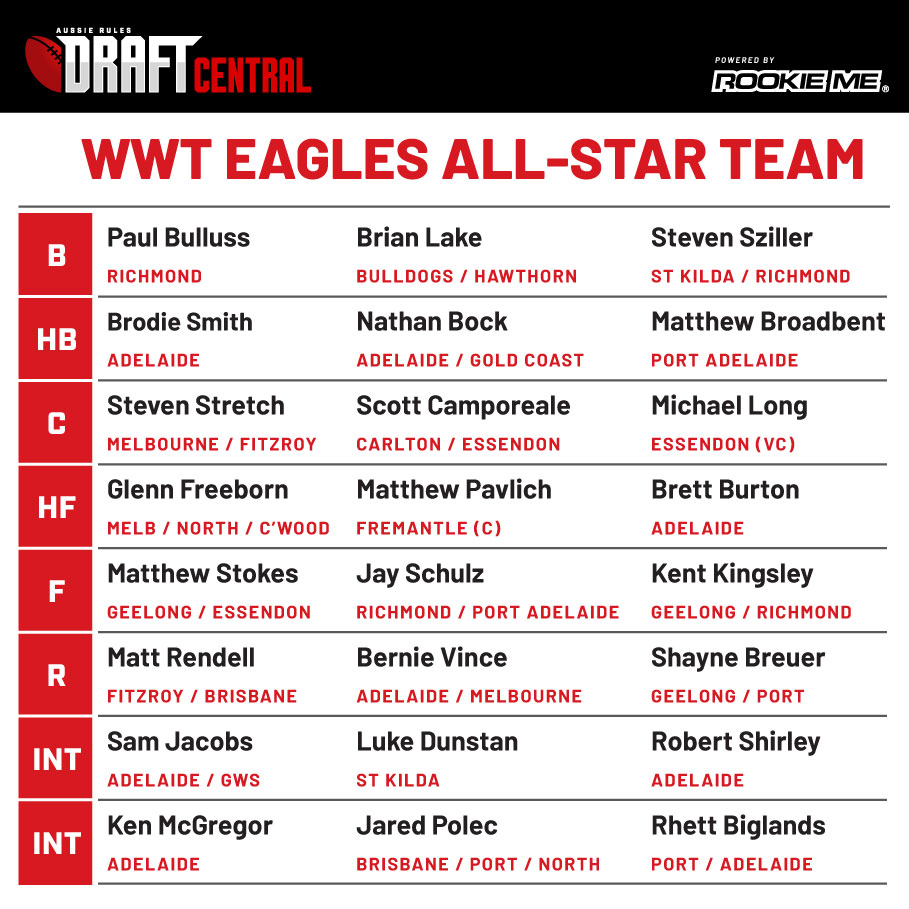 WOODVILLE-WEST Torrens Eagles are the final team in our All-Star Team of the AFL Draft era. The Eagles have a strong spine and plenty of speedy types as well as those who can hit the scoreboard regularly.

Matthew Pavlich, Michael Long, Brian Lake and Scott Camporeale are the headline acts in what is a formidable Eagles side. The side is loaded with tall talent and the height up forward would prove a nightmare for opposition defenders. Several players should consider themselves unlucky to miss out on selection in this strong Woodville-West Torrens lineup.

Three-time Hawthorn premiership player and 2013 Norm Smith Medalist Lake was an obvious inclusion at full-back – a position he excelled in for the Hawks after spending eleven years at the Bulldogs. Lake was named an All-Australian on two occasions and won the best and fairest award in 2007 during his time at Whitten Oval. Nathan Bock was selected as his key position partner in defence, although the former Crow and Sun was also capable in attack. He had a terrific year in 2008, winning All Australian selection at centre-half-back and taking out the Malcolm Blight Medal as Adelaide’s best and fairest.

Fellow tall defender and former Tiger Paul Bulluss also earned a spot, having played 97 AFL games in the yellow and black. Current Crow Brodie Smith provides plenty of line-breaking run and carry from half-back and possesses one of the most lethal kicks in the competition. Former Power defender Matthew Broadbent takes out the other flank position and, like Smith, would provide plenty of rebound from half-back. The lock-down role would be handled by the 176cm Steven Sziller, who played 118 games with St. Kilda and 38 with Richmond. Former Crow, Ken McGregor is a player who can come off the bench and provide height at either end.

The Woodville-West Torrens midfield is dominated by a a nice blend of speed and skill, as well as hardness. In the centre circle is Yorke Peninsula boy, Bernie Vince. Boasting excellent foot skills and an ability to impact the scoreboard, Vince played 129 matches with Adelaide and 100 with the Demons, winning best and fairest awards at both clubs. Vince did some of his best work as a tagger at Melbourne. Carlton champion Camporeale was a star on the wing in the navy blue before switching to cross-town rivals Essendon later in his career but has been ‘pushed’ into the centre given the two wingman in the side. A genuine goal kicker, ‘Campo’ booted 205 majors in 252 games, won a premiership in 1995 and was a best and fairest and All Australian in 2000. Strong-bodied on-baller Shayne Breuer also earned selection in the midfield rotation and will forever be known for kicking Port Adelaide’s first AFL goal, while Luke Dunstan rounds out the midfield rotation off the bench.

Both Essendon star Long and predominantly Melbourne – with a stint at Fitzroy – talent Steven Stretch run off the wings. Long won a Norm Smith Medal in the first of two flags and also made the All-Australian side twice, while Stretch won a best and fairest at the Dees. Coming off the bench, current Roo Jared Polec can fill a role on the wing, with his high metres-gained playing style suiting an outside role. Ruckman Sam Jacobs was a revelation in the tri-colours after being traded by the Blues. He played 184 games with Adelaide, was named in the All Australian squad of 40 on three occasions and is waiting to come off the bench to rotate with Matt Rendell. The Fitzroy ruck earned two All-Australian honours and two best and fairests to grab the starting position. Robert Shirley made a career on tagging for the Crows. A reliable on-baller responsible for shutting down the opposition’s best midfielder, Shirley played 151 AFL games and will rotate through the middle.

Footballing legend Pavlich is the undisputed go-to man up forward. After being drafted in 1999, ‘Pav’ booted 700 goals in 353 AFL games for Fremantle and earned 126 Brownlow votes. A six-time All-Australian and six-time best and fairest winner, Pavlich was a shining light for the Dockers despite the club struggling for much of his career. High-flying former Crow Brett Burton provides a handy decoy option for Pavlich, but was an excellent key forward in his own right. He kicked 264 goals and took a plethora of spectacular grabs during his 177 games at West Lakes. Kent Kingsley is named at full-forward, having nailed an impressive 239 majors in 125 games, 110 of which came with Geelong.

Jay Schulz was also a regulation selection, having played 194 games and kicked 333 goals. Although the forward-line features four talls, they each possess different skill-sets and complement each other with different playing styles. Providing some much-needed speed at ground level is two-time premiership winning small forward Matthew Stokes. Although Glenn Freeborn played in a variety of positions, he was selected on a half-forward flank, having booted three goals for the triumphant Kangaroos in the 1996 Grand Final. Both McGregor and Rhett Biglands could rotate off the bench here, while Biglands could be the third ruck option for the Eagles as well.

In terms of players just on the cusp of making selection, Scott McMahon (124 games) has the most games of those missing out, while Cameron Sutcliffe (109) and Paul Stewart (101) also reached the ton but just missed out on making it. In more recent times, Brennan Cox and Jack Lukosius are giving fans plenty to enjoy and no doubt in a few years will force their way into this side. Others who made their debuts this year include Kysaiah Pickett, Josh Morris, Harry Schoenberg and Andrew McPherson, with a number of other talents running around out of the Eagles’ program.