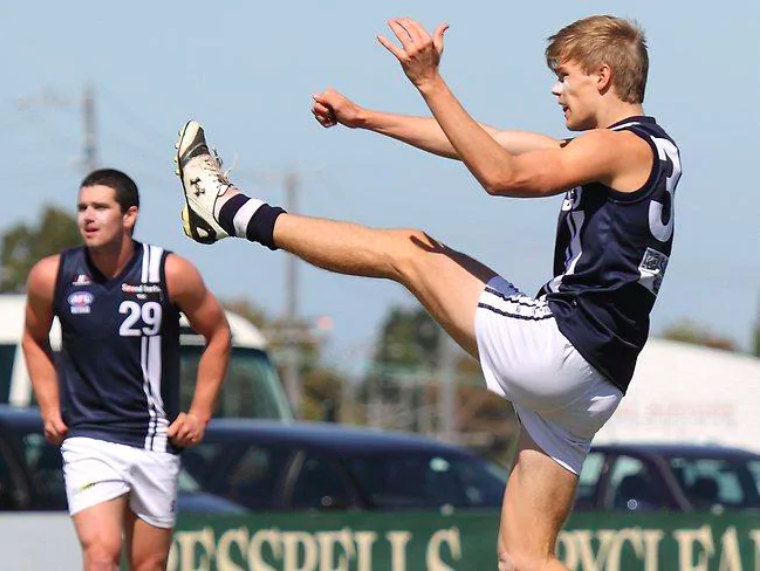 IF you are missing footy like we are, then let us somewhat salvage that with a look back in our series of Classic Contests. In today’s contest we look at another clash between the NAB League rivals to complete our full series, and today’s battle is between the Geelong Falcons and Murray Bushrangers. In this edition, we wind back the clock to 2012, when the two sides met in a free-flowing elimination final.

An eight-goal to nil first term helped set up the Geelong Falcons’ 2012 elimination final triumph over Murray, proving the perfect start to their TAC Cup finals campaign. The Bushrangers went into the clash as a steady favourite having finished fifth at 10-7. Their double-digit win tally was two figures higher than that of Geelong, who landed in eighth spot with an 8-8-1 record.

Form was not exactly kind to either region, as they both failed to win in three of their last six outings. The two sides had met twice before in that season, and the ledger sat at one win apiece after Murray won by 34 points in Round 4, while Geelong snuck home by three points in Round 10. As was the case in those fixtures, this knockout bout would be played on neutral territory.

Clearly out to prove they weren’t making up the numbers, the Falcons shot out of the blocks and put all eight of their first term scoring shots through the big sticks. But it was their turn to go goalless in the second period, as Murray hit back with six majors to keep within reach at the main break, still nine points adrift. The fightback would only spur Geelong back into action though, as the lower-ranked side clicked back into scoring gear with four goals in each of the final two terms to run out comfortable 40-point winners.

Prolific state leaguer Tom Gribble was named Geelong’s best on the day, racking up a monster 40 disposals, while draftees Mason Wood (18 disposals, eight marks, two goals) and Josh Saunders (22 disposals, seven tackles, one goal) were also amongst it. Scott Dixon was another to find both the ball and goals with 22 touches and two majors, while James Tsitas had it 25 times. Other AFL products to feature included Darcy Lang (20 disposals, one goal), Lewis Taylor (17 disposals, one goal), Nick Bourke (22 disposals), and Darcy Fort (26 hitouts).

Even as a bottom-ager, Michael Gibbons managed to accumulate a mountain of possession for Murray, finishing with 30 disposals. Lonnie Hampton (16 disposals) was named the best Bushranger though, followed by Joseph Cousins (10 disposals, five marks, one goal). Among the future draftees afield, Tom Clurey and Nathan Drummond both hit the scoreboard, while Josh Prudden gathered 21 disposals, Jarman Impey had 15, and Matt Taberner booted a goal from his 10 disposals and six marks.

While the Bushrangers’ promising season ended there and then, the Falcons would go on to face Sandringham in the semi finals. They went down by 25 points, with the 2012 season most famous for its famous golden point Grand Final where Jack Macrae won Oakleigh a thriller against Gippsland.