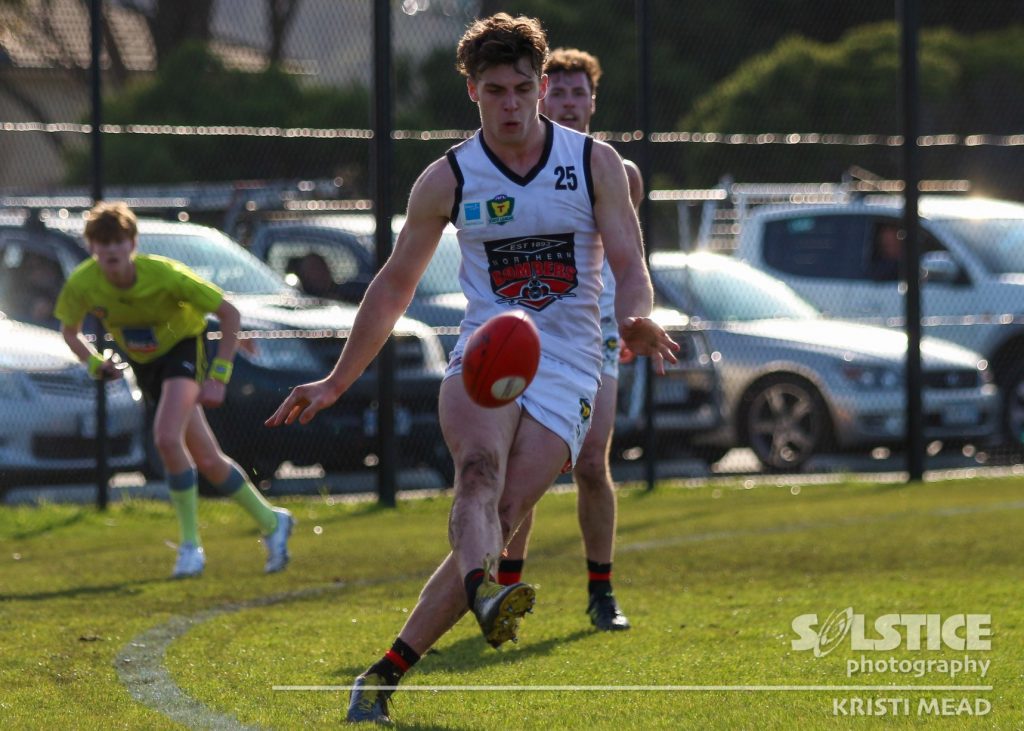 NORTH Launceston’s Jackson Callow was a star for his side in the Tasmanian State League (TSL) competition on Wednesday night, but not in the way that many NAB League spectators who were unable to see the game might have expected. The key position forward is a contested marking beast – comfortably the best in the draft crop when it comes to his hands above his head – but what has been trialled in stints this season for the Bombers, became a full-time role for the 194cm, 96kg 18-year-old.

That role is a rebounding centre half-back that not only nullified his direct opponent – of which there were many on the night – but also provided some drive. Callow is not the most athletic of players as you might expect from a key forward, but what he showed under lights was his ability to read the ball in flight regardless of what end he was up. In the TSL season so far, Callow played predominantly forward in the first few games – including kicking three majors against the Blues in the team’s first encounter – whilst having stints further up the ground and even around the stoppage at times. In recent weeks, Callow has spent quarters here or there in defence, lining up at centre half-back and holding his own against some of the league’s top performers. On Wednesday night, that trial became a full-time job.

One of the knocks on Callow coming into the season compared to some key position players was the unknown versatility. As a key forward, he is too big and too strong, and he showed that against NAB League defenders last year on his way to 24 goals in 14 games – an average of 1.7 a match – often against multiple opponents. While it might be just the one full-time game – and several quarters here and there – Callow is proving that he has the versatility to play multiple roles at the elite level.

Here’s how we assessed his performance:

Starting at centre half-back, Callow ironically won his first touch through a mark on the forward side of the wing and then managed to short kick and hit his target by foot. Back at half-back midway through the term, Callow spoiled the ball cleanly away from his opponent on the lead, but unfortunately it fell to a Launceston opponent who mopped up, kicked it forward and it led to a goal. In this case, there was no other logical option for Callow to take, and it was bad luck rather than poor decision making. He would push up on the wing and use quick hands to keep the ball moving whilst working hard defensively to provide a block for his teammate.

Callow first featured with a free kick deep in defence, going up for a mark in a pack but was pushed out of it. He used the ball well by foot and then would again push up the ground and dispose of it by hand quickly. One aspect of Callow’s game was the fact that he played within his limitations, not going for massive runs, but doing enough to keep the ball moving quickly. His first of a number of highlights came in the 18th minute mark of the term where he charged out of deep defence to intercept a ball at full speed and open up the game on the counter attack. His pass which went long to the wing hitting a target caught Launceston at a disadvantage and led to a Tom Bennett mark inside 50 and set shot goal.

There were plenty more of those highlights to come, with Callow’s contested marking ability unsurprisingly being a feature of his performance. He had a good effort early in the quarter but could not quite pull it down with so many players around him, but soon played the role of a smaller man by reading a tackled opponents handball off the deck, cutting it off and then kicking it long outside the defensive 50. He was too strong for his opponents in the air, taking a contested mark at half-back, and then had what was his best play of the game. Launceston had won the ball at half-back and with so many numbers camped in the Blues forward half, there was space galore down the field. Launceston launched off half-back to spot up a free player on the forward side of the centre, but then out of nowhere Callow had raced across, clunked the mark one-grab and then charged down the middle until he could steady and pump it back inside attacking 50.

The fourth term also provided some highlights, but also some areas that the young key position player could work on. He was unluckily pinged for walking the ball out of bounds at half-back in the opening minute, but was fortunately not made to pay the price by the Blues. His marking spree continued through the final term with yet another intercept mark at half-back, reading the play perfectly and cutting off a forward’s marking avenue. He took a remarkable grab over a smaller opponent in a goalsquare pack, putting the arms up and clunking it one-grab with ease, and was able to hit a target in the back pocket. A couple of times he made mistakes by hand, such as at the 16-minute mark when being tackled he rushed a handball to no one in particular with Launceston having the outnumber and the Blues ran it down to kick a goal. His work at ground level as a whole was quite good though, opposed to Jared Dakin late in the term, he was able to keep the ball in front of him and not take possession until he had to, but again just coughed up the handball to an opponent facing him.

If there was one aspect to take out of this game, it is the fact that Callow showed he can read the ball in flight at either end and comfortably play in the defensive 50. It is one thing to outmark your opponent in a one-on-one – no one would ever doubt Callow’s ability to do that – but another to make the choice to come off your opponent knowing he was not going to impact, and instead chop off a forward thrust. While he has set the bar high for himself with this performance, if Callow is able to continually provide that aerial presence and a bit of drive wherever he is on the ground, he may have found that point of difference as a swingman.