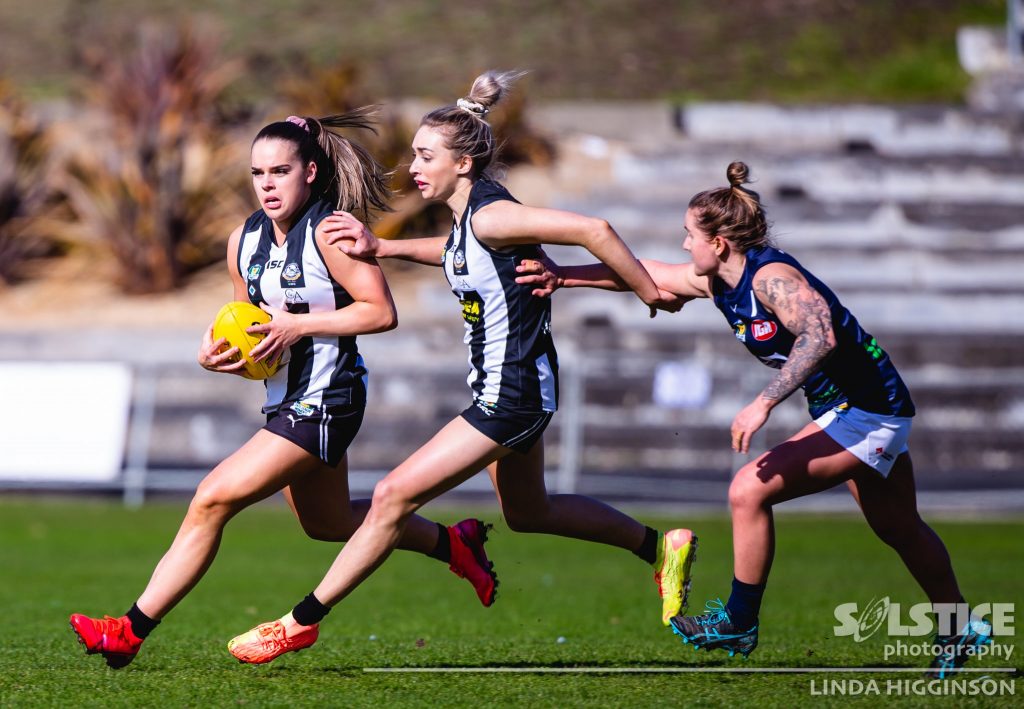 REIGNING premiers North Launceston have joined Launceston at the top of the table in a rare Wednesday night fixture, defeating the Blues to kick off Round 8 last night. The Bombers won by 18 points, defeating the Blues 8.4 (52) to 5.4 (34) heading into a bye, and reversing the result from earlier in the season where the Blues were too strong. In this week’s Tasmanian State League (TSL) weekly preview, we look at the upcoming three games still remaining.

Launceston will have a chance to atone for the loss on Sunday when it takes on Tigers, while the Bombers will earn a nice rest over the weekend. In other matches, Glenorchy and Clarence do battle at KGV, while Lauderdale hosts North Hobart. All four teams are split by just four points in the middle of the table, with Clarence and Lauderdale looking to increase their lead on their opponents to eight points, and sit just four points behind North Launceston. If the Blues win they will go further ahead at the top and regain breathing space over the Bombers, while Tigers are desperate to join the Demons and Magpies on eight points to remain in finals contention.

The key inclusion for the Tigers will be former Gold Coast Suns talent, Mackenzie Willis who joins Kieran Lovell in the yellow and black as they try and overcome what was a flat-looking Blues side off the bye last night. A slow start cost the Kingborough-based side last round and will be hoping to get off with a better one against the ladder leaders who remain contenders, particularly with the likes of Dylan Riley (6 goals) up forward.

For the Magpies, Jaye Bowden has rekindled his best form at times this season, slotting eight goals to be a danger alongside Matthew Joseph up forward, whilst youngster Braidy Simpson has shown he has a bright future. Playing coach Jeromey Webberley is the man to stop in the red and white, leading his young side well with Noah Holmes (five goals), Sam Banks, Darcy Gardner and Oliver Davis all strong performers this season.

Lauderdale finally broke its losing streak last week, and will be keen to record back-to-back wins, with Luke Nelson (seven goals in four games) and Harry Richmond (three in seven) amongst the top goalkickers in recent weeks. North Hobart’s young legs are starting to be overrun, starring down the barrel of a fourth straight loss if the Demons cannot turn the form around here. Nathan Hardy (eight goals) and Jacob Steele (seven) have been strong as key options, but the youth of Jye Menzie (seven) and Patrick Walker (four) have provided good speed and skill around the forward half.

Glenorchy vs. Clarence
Lauderdale vs. North Hobart
Launceston vs. Tigers

Top three battle the one to watch at KGV

A top three battle between second placed Clarence and third placed Glenorchy is the Tasmanian State League (TSL) Women’s match of the round at KGV. With Launceston reasserting itself as the top team in the league, a Clarence side looking to bounce back from its loss to the Blues two weeks ago and coming off a bye, takes on a Magpies outfit that found the winning formula to knock off the Magpies, but went down to the Roos last time these teams met.

The Roos got up by 32 points in their last encounter, but now back home at KGV, the Magpies will be keen to atone. They have strung three consecutive wins together with a bye in there as well, holding the Blues to their lowest score – just seven points – along the way. Sarah Skinner is travelling very nicely for the black and whites, slotting nine majors in four games, named in the best every match, while Tiarna Ford (six goals), Molly Mitchell (five) and Elise Barwick (four) are all impressive. Former North Melbourne youngster Libby Haines, and teenage talent Jemma Webster have also been named among the best multiple times with Zoie Crawford.

The Roos will be keen to double the dose against the Magpies and cement themselves inside the top two with another win here, having only lost to Launceston this season. Jessie Williams was best remembered for her seven snags earlier this year, and has nine for the season to lead her side’s goalicking, while Amy Edmand (seven) and Jacinta Limbrick (five) are both hitting the scoreboard with a couple of four-goal hauls. The experienced Nicole Bresnehan has not missed a beat this season, named among the best in every game, whilst Bronte Scott and Louisa Marmion have both been impressive for the red and whites.

In a battle of Launceston, the top of the table Blues will hope to blow out their already ridiculous percentage of 405.66 and extend the lead they have at pole position on the TSL Women’s table. They take on the fourth placed North Launceston, who boosted their percentage with a win over Tigers, but went down to Glenorchy last week. Prior to their second bye, the Bombers had lost back-to-back games with a low percentage, but are starting to hit their groove. The last time these teams met, Launceston won by 25 points, but restricted its northern rivals to just one behind for the game.

Daria Bannister is leading all-comers for the Blues with seven majors in her five games, including a haul of three snags at Twin Ovals. Abbey Green popped in for one game and a best on ground performance with three goals against Clarence, while Meg Sinclair (three) is also in the top few goalkickers. Over-age tall Camilla Taylor remains one of the ladder leaders’ best this season with four from five bests, the same as young gun Mia King, with Angela Dickson another one performing strongly.

For the Bombers, Maggie Cuthbertson has been a nice source for the goals the past couple of weeks booting three majors, while Hayley Breward has also kicked a couple as the two multiple goalscorers. In terms of their top performers, the duo are impressing this season alongside the likes of Jodie Clifford, Kayla Sheehan, Sophie Farrow and Zoe Bourne who have all made it into the team’s best on multiple occasions.