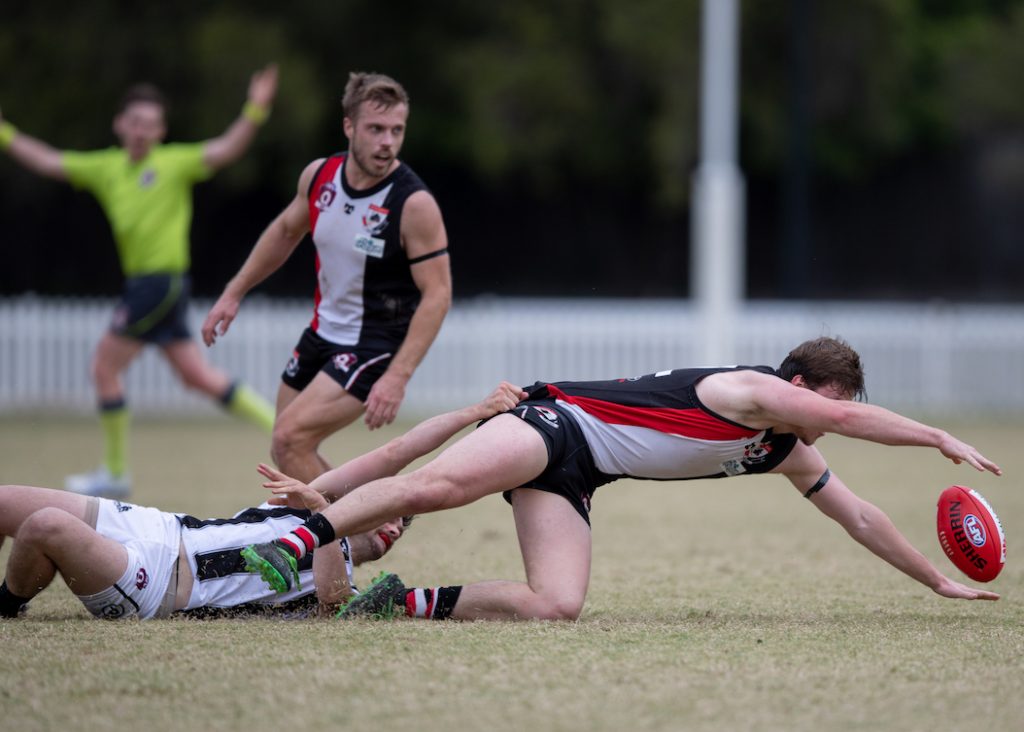 TWO rounds remain in the Queensland Australian Football League (QAFL) competition, with minimal time for sides to try and squeeze into the top six spots for finals. The top three sides – Broadbeach, Morningside and Palm Beach Currumbin – are locked away for finals and considering percentages, have the top three spots booked. Top two get a week off though, so there is plenty to play for. At the other end of the ladder, Wilston Grange and Labrador can mathematically still make it despite having just one win on the board after seven rounds, but need results to go their way.

There are a number of ladder defining games this weekend starting with Maroochydore and Labrador. The winner will go a long way to booking a finals spot, whilst the loser will be in danger of missing out. For the Tigers in particular, a loss could be deadly, given they have a lower percentage than the fifth placed Sherwood, who would then be the only team Labrador could overtake. Maroochydore can secure a finals spot with a good enough win and build a large enough percentage gap to make it difficult for the sides below the Roos to make it.

Another season-defining clash is between Sherwood and Surfers Paradise which is linked the aforementioned match. If the Magpies get up with the Roos, it will all but lock away the top six spots with a round to play. The Demons showed they are not done with yet, getting a vital win over Wilston Grange last round. They will need to win here to be a realistic chance to defend their title, and if they do, will move up to at least sixth on the table, though a loss – holding the lowest percentage of any of the nine sides – would be fatal for their post-season hopes.

At the other end of the ladder, Morningside hosts Palm Beach Currumbin in the standout match for the round. The pair are fighting over a week off with the Panthers undefeated, but playing the other top two sides in the final fortnight. With Broadbeach next week, Morningside will get a good idea of where it sits in the scheme of things, while Palm Beach Currumbin will be desperate to knock over another contender and take prime position inside the top two. Considering the Lions will have an easier opponent next week, they know they will all but secure a top two spot with a win here, whilst Morningside will achieve that if the Panthers can get up.

In the final game of the round, a top-against-bottom clash looms as a potential blowout, but Wilston Grange came close to a win against Surfers Paradise last week. Broadbeach look good to be the premiership favourites, winning all six games and will have Morningside next week. A win here will secure the Cats inside the top two, but a loss just opens the door for the other top three sides. Realistically, Broadbeach should get the job done, though the Gorillas have their backs against the wall knowing a win is the only option to play finals, no matter how tough the task might be.

In terms of the competition’s leading goalkicker, Matthew Hammelmann seems to have one hand on the trophy after eight snags last week to take his total to 28 for the season. He overtook Broadbeach’s Jordan Moncrieff who had an uncharacteristic game that even saw him miss from on the line as his ball drop missed the boot. Nonetheless, Moncrieff sits three goals back, and three ahead of Maroochydore’s Mitchell Scholard. The other player with 20 majors is Liam Dawson who will return this week after a week off. In terms of young guns, Josh Gore (13 goals in five games) and Max Pescud (12 in four) have been the key scorers.

Looking at some of the top performers around the league, Mt Gravatt – who has the bye this weekend – has Luke O’Sullivan who has been named in the best six of a possible seven times, snagging six goals in the process. Morningside’s Matthew Payne, Labrador duo Fraser Thurlow and Matthew Lee and Wilston Grange’s Will McKenzie have also earned best honours in six matches. Scholard and Roos’ teammate Jacob Simpson are the next most with five bests for their respective sides.

For Brisbane Lions fans, it might be one of the last couple of weeks to see Tahj Abberley in action as Wilston Grange need to do the unthinkable and upset Broadbeach with Gold Coast fans being able to see the likes of Gore, Bailey Reeves and Aidan Fyfe running around for the Cats. Blake Coleman and Saxon Crozier will run out for the Panthers against Jack Johnston for the Lions, whilst Rhys Nicholls and Carter Michael are among those who might cross paths in the Maroochydore-Labrador game. The Magpies will need to find a way to stop Pescud who slammed home 6.5 for the Demons last week in the win, in a big weekend for QAFL action.