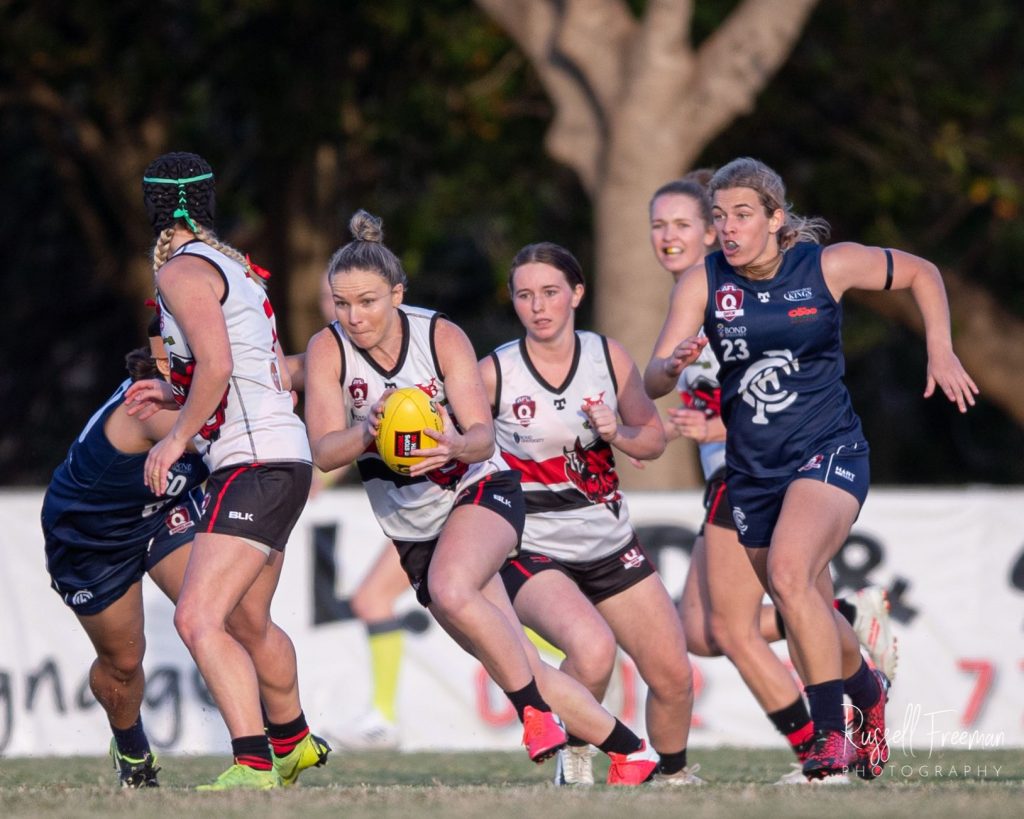 MAROOCHYDORE has locked up a top five finals spot with a narrow nine-point win over University of Queensland, whilst leaving the door ajar for Wilston Grange to pounce in the final two rounds. In the eight-team Queensland Australian Football League (QAFL) Women’s competition, six sides will make finals, and they looked to be secured unless the Gorillas can win their last two matches this season. But the top five spots are all locked away, with Bond University in the box seat for top spot, four points ahead and a massive 379.25 percentage. Just four points separates second from fifth with a fortnight left, so anything can happen on that front.

In the most important game of the round in terms of securing the top five, the Roos got the points thanks to a 5.3 (33) to 4.0 (24) win over sixth placed University of Queensland. The visitors booted the only goal of the first term, but then managed just one behind as the Red Lionesses piled on their entire score in the second quarter, booting 4.0. Maroochydore stood tall in the second half, kicking the final four goals of the game with a 4.1 to 0.0 finish to run out nine-point victors.

Shannon Campbell was the sole multiple goalkicker for the Roos with two majors, as the AFL Women’s experience rose to the top with Isabel Dawes and Lily Postlethwaite named in the best alongside Bella Smith. For the home team, Sophie Ure managed two goals as Nat Grider and Dakota Davidson kicked one each, and Madi Crowley-Long was nominated as the losing sides’ top player.

Yeronga South Brisbane’s top two hopes remain well and truly alive with a stunning seven goals to two effort in the middle two quarters during their 18-point triumph over Coorparoo. The Devils were fourth coming into Round 10 of QAFL Women’s action, with Coorparoo holding the prized second spot thanks to a higher percentage. Both teams only managed one behind in the first term, but the Devils recovered quicker after the break, piling on 7.1 to 2.2 to race out to a 29-point advantage with a quarter to play. As expected the experience of Coorparoo came hard in the last term, but it would not be enough, falling short 7.4 (46) to 4.4 (28).

Lexia Edwards was a match winner with four snags and clearly being amongst the best on ground for the visiting team. Sam Virgo kicked two goals and was also impressive, one of a number of AFL Women’s talents who stood out in the win, as Jacqui Yorston, Lauren Arnell and Jordan Zanchetta also impressed. For the Kings, Jamie Stanton booted two goals and alongside Jess Wuetscher was amongst the best, while Jenae Govan and Alanna Perry were also strong.

Bond University kept its top spot safe with a regulation win over Aspley Hornets. The Hornets have been much more competitive of late and that continued, forcing the Sharkettes to boot 6.13 (49) whilst getting a goal on the board themselves in a 41-point defeat. Michaela Campbell kicked Aspley’s sole goal of the game, while Bond University had six individual goalkickers in the win, led by best on ground, Molly Ritson. Krystal Scott, Lily Tarlington and Wallis Randell impressive for the winners, while Jorja Guyatt, Lucy Pengelly and Isabella Kotatis all shone once again as the youth stood out in defeat for the Hornets.

Coolangatta Tweed took full advantage of Coorparoo’s loss to grab second spot on the table and be in pole position for a week off come finals time. The Bluebirds did all the heavy lifting in the first half, slotting 4.6 to 1.2 in a somewhat inaccurate total, but one that was enough to get the job done. Wilston Grange battled hard and came late with a couple of second half goals, but it would be too little, too late for the Gorillas, going down 5.8 (38) to 3.4 (22). Leah Kaslar and Lauren James both snagged two majors for the Bluebirds, as Courtney Ugle, Amy Fortescue and Kitara Farrar all shone in the Sunshine State. For the Gorillas, Catherine Svarc and Eloise Janette O’Connor were impressive and kicked goals, while Kylie Welsh was also named among Wilston Grange’s best.