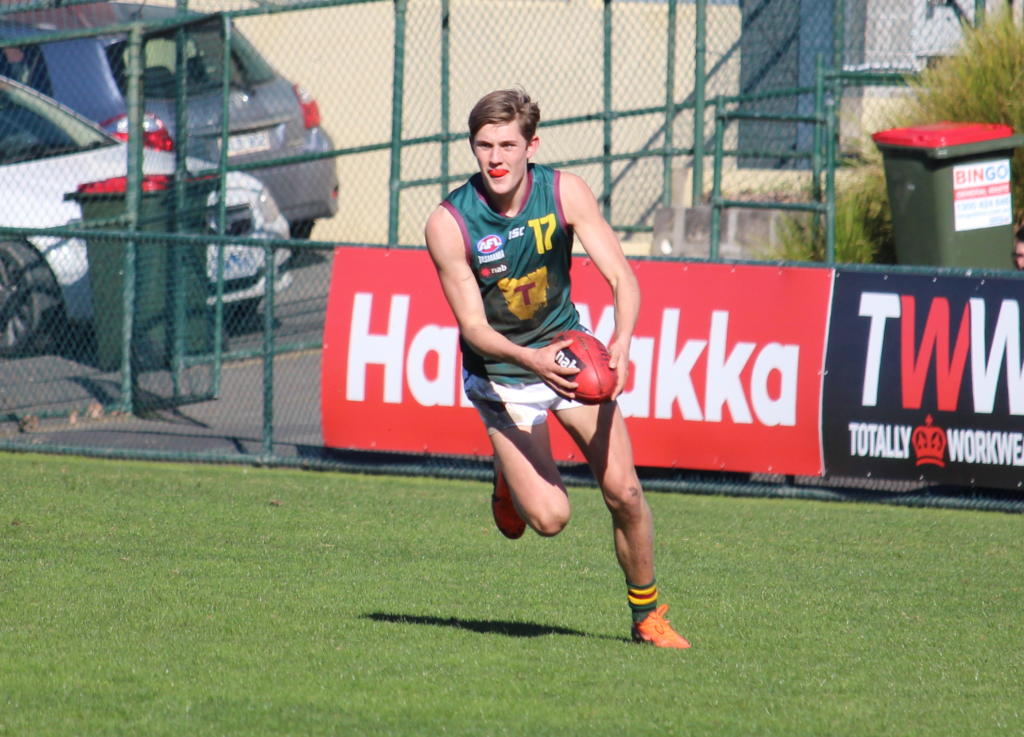 Next under the microscope in our AFL Draft watch is Tasmanian prospect Patrick Walker, a classy half-back/wingman who possesses sharp skills by foot. The North Hobart product earned AFL Academy recognition for 2020 after an eye-catching bottom-age campaign, where he played 16 games in Tasmania’s inaugural full-time NAB League season. While he was mainly utilised in defence, Walker has since adapted his efficient outside game slightly further afield to prosper on a wing for North Hobart in this year’s Tasmanian State League (TSL). He has shot in from slightly further back, but the 186cm prospect has become one of his state’s most promising draft hopefuls.

TSL Round 7 vs. Clarence

Started on a wing and was able to spend time inside 50 on a number of occasions, showing good pressure on Josh Green to force a mistake for the Clarence player going inside 50. He started a play through hands in the middle then pushed forward, received it back after it spilled out, and quickly snapped for a great first quarter goal. He was quieter in the second term, but started to get back into it with a productive third quarter. He just finds space and uses it well, though on one occasion was a bit rushed after being surprised the tap on the wing fell to him. He had a late kick towards goal but was intercepted by the loose Clarence player in the final term. Nonetheless, Walker showed some promising signs with neat ball use around the ground and was creative enough to start plays off half-back or through the middle.

TSL Round 6 vs. Glenorchy

While many of his teammates were missing targets early in the wet conditions, Walker was using the ball well and showing clean hands off the deck. He was kicking long out of the back 50 and trying to provide run for his team against the flow with some one-twos on the wing. Walker showed composure under pressure and while he made the odd mistake in the wet conditions after the opening term, was still able to show good recovery on the wing when knocked off the ball at first in the third term, and then pressured an opponent off the ball to make a mistake in the last quarter. His hands in the wet conditions remained strong with a deep kick to the pocket important as the Demons continued to attack late.

TSL Round 5 vs. Launceston

The AFL Academy member played predominantly on the wing as his run-and-carry and penetrating kick were on display. He injected himself into the game with a strong first quarter, setting up well around stoppages to get clearances, while also finding himself free on transition plays to use his neat kicking to keep pushing it forward.

Late in the opening quarter he drifted forward and took a mark in front of his opponent 45 metres out, but a 50-metre penalty put him on the goal line, and he put it straight through the middle. A quieter second quarter meant he almost got himself a second goal but fumbled at the wrong moment.

His second half also started a bit quieter than his blistering start to the game, but his play picked up with the intensity of the game in the final quarter as he halved a big contest in his defensive half before receiving help from teammates. His work did not stop there as he received a handball 60 metres away to pump it deep inside his forward 50. He continued to pop up in important spots as he had another shot on goal which just missed and covered good ground to create options on rebounds and entries.

Though he did have some quiet patches, he managed to maintain position and discipline as a wingman and more importantly, he played that linking role well with good ball use. He is a bit of a Lachie Whitfield type with a lean build, but good disposal and still an ability to find and win his own ball.

TSL Round 1 vs. North Launceston

Walker looked classy on the wing, winning plenty of the ball and using it well by foot by often hitting long and accurate passes, providing a good mix to his side. Walker mostly played down back last year but looks just as comfortable up the ground in what was an impressive senior debut.