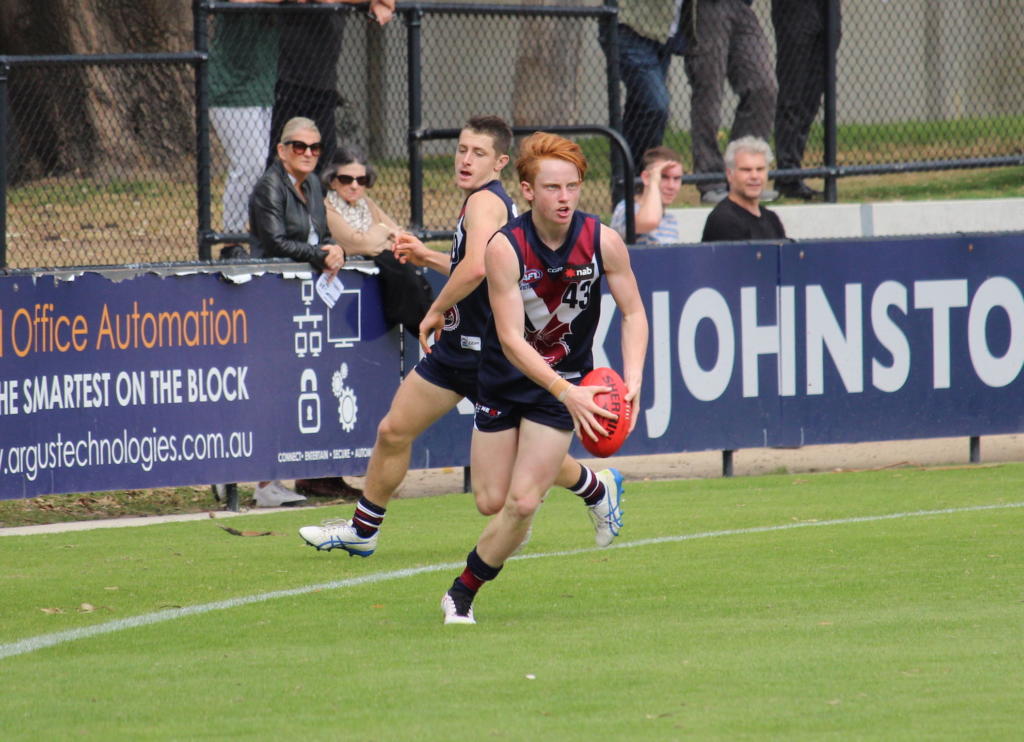 Next under the microscope in our AFL Draft watch is Sandringham Dragons prospect Jake Bowey, a small midfielder with great class and athletic attributes. Bowey is the kind of player who continues to prove that if you are good enough, you are big enough, having excelled across 16 NAB League outings with the Dragons as a bottom-ager. While he made the wing his own during that time, Bowey has the toughness and smarts to play inside at Under 18s level, the skill to ply his trade off half-back, and the speed to terrorise defenders as a small forward. He looms as a prospect with top 30 credentials, even without the opportunity to prove as much in 2020.

One of Team Brown’s best players on the day with his run and neat kicking skills throughout. His day started with some great running power and vision to get the ball into the hands of Eddie Ford for an early goal, and then produced a lovely kick at full speed through the middle to Blake Coleman.

He used the ball well time and time again, winning a fair bit of it on the wing and half-back, but also setting up plays going forward, including a late game interception at half-forward and tight kick into Ford in the pocket. His hands in close and ability to find space, as well as his footy IQ is great. Even took a very nice high mark early in the fourth term and played on straight away to keep the ball moving.

NAB League Round 15 vs. Tasmania

An exciting bottom-age prospect who looks dangerous when he has the ball-in-hand because of his zip. He played mostly on a wing where he was able to win some early touches and showed clean hands in the wet to hit-up Ryan Byrnes for a goal late in the second term with a great kick and nice vision. Sometimes he can miss his targets by foot, but the kick is still well placed to their advantage, and he does try and take that high risk-high reward kick when going inboard. Bowey uses his body well and showed off his composure in the third term with a clean pick-up late in the third term, stepping around an opponent and snapping over his shoulder for a goal. Set up Jack Bell in the fourth term with a kick to his advantage at the top of the goalsquare. Has time and space in the midfield and weighs up where to put the ball to best advantage his team.

NAB League Round 10 vs. Geelong

Was named the Dragons’ best, and provided some damaging run on the outside from his customary wing position. Could have had an even bigger impact if it weren’t for his 0.3 in front of goal – missing a shot on the run in the opening term, a snap in the last quarter, and another on the run in the last minute which would seal the two-point win. He is only slight in stature, but Bowey did not shy away from the contest as he ran head-on at the ball to win it impressively in the second term, using it as a catalyst to get more involved. Bowey’s run-and-carry proved most damaging, and he showed a nice bit of vision to seek out Riley Bowman inside 50, just falling short with the kick. He made a couple of crucial interceptions forward of centre too, making his contributions important ones.

NAB League Round 8 vs. Bendigo

The zippy wingman worked up and down the ground, registering 17 touches, four inside 50s and five marks. Copped a big elbow to the neck region in the second quarter and had to be assisted off, but finished the game to play a strong role in Sandringham’s victory. Always uses the ball well by foot and plays the percentages well. Really lifted in the last quarter, putting his small frame on the line but also providing a strong outlet for defenders, often breaking into space on the wing and providing an option.

NAB League Round 7 vs. Eastern

The diminutive midfielder was productive for the Dragons, showcasing his elite speed and evasiveness across the whole game. Failed to hit the scoreboard but played predominantly on the wing, finishing with 23 disposals. Was often tackled and thrown around due to his small stature but did some eye-catching things, including leaping for a huge mark and following up to earn a free kick. Produces fantastic repeat efforts and has a large pressure factor. Is smart with ball in hand and uses it effectively on his left boot, the bottom-ager is one to watch out for.