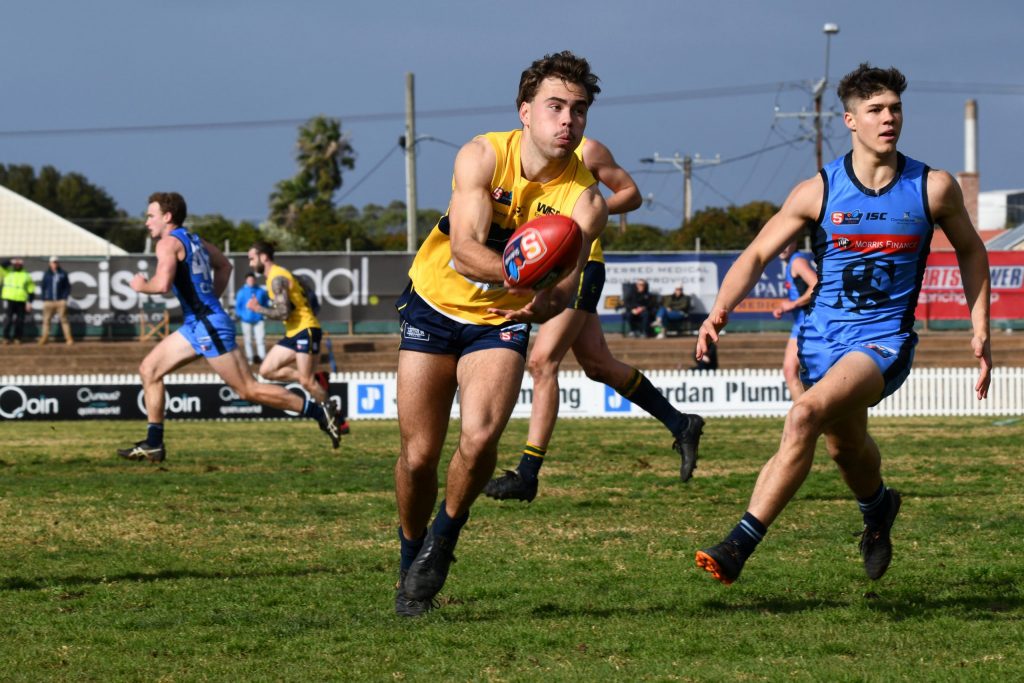 WITH young guns impressing at state league level around the nation, we narrow our focus for this week’s South Australian National Football League (SANFL) wrap to the performances of youth throughout all three grades. There is plenty to unpack in our first altered edition, with a late change seeing West Adelaide blood its latest League debutant, while the top two Under 18s sides suffered defeat on an action-packed super Saturday.

2019 State Under 18s representative Karl Finlay returned to the League fold for North Adelaide, as the Roosters continued their fine season with a 52-point win over the Redlegs. The key defender notched seven disposals and two marks, with usual partner-in-crime Dyson Hilder unable to make the cut on an extended bench this week.

Under 18s aside, much of Norwood’s young brigade was showcase in the Reserves, as the likes of Michael Cavallaro, Jack Saunders, Daniel Fairbrother, and Ben Ianniello all made the step up. Henry Nelligan, who made his League debut in 2020 racked up a game-high 34 disposals in the Redlegs’ Under 18s loss, highlighting his quality.

Cooper Murley, Bailey Gal, and Billy Haebich all clicked over the 25-disposal mark for Norwood in the same game, while Tom Michalanney and Marcus Roberts both had it 17 times as they push for a senior promotion. Talls Nathan Hearing (20 disposals, 29 hitouts) and Samuel Duke (19 disposals, one goal) were also impactful.

It may have come about via a late change, but GWS GIANTS Academy product Lachlan Squire made no doubt about his League credentials with 19 disposals, five marks, and five clearances on debut. The Queanbeyan native had been cutting his teeth in the Reserves grade and was named as a League emergency over the last few weeks, but made the most of his opportunity upon finally breaking through.

Leading Westies draft prospect Riley Thilthorpe played alongside Squire in the top flight, but had one of his quieter outings with six disposals, nine hitouts, and a goal. Fellow state academy member Bailey Chamberlain may be next in line for a senior berth having made the step up to Reserves footy, with Nicholas Couroupis another junior to have earned a promotion on the weekend.

For Centrals, Lachlan Grubb will hope to return having moved back down to the two’s, while Corey Durdin is set to miss at least another week with a hamstring injury. In the meantime, Victorian Jack Toner has fared well for the Bulldogs in their absence, notching 21 disposals and a goal in Centrals’ first League win for the year.

At Under 18s level, the Bloods pulled off their own maiden win for 2020. Dylan White was prominent with 30 disposals, while Luke Young booted two goals from his 27 touches and nine marks for the victors. Cooper Gilbert (eight clearances, 10 inside 50s) was again terrific at the contest, while Jye Sinderberry (23 disposals, six marks) made a triumphant return down back and Luke Heitmann booted three goals up the other end.

The Bulldogs had their two-game winning streak snapped, but NT recruit Brodie Lake again impressed through midfield with 30 disposals, 12 marks, and five clearances. His work both inside and on the spread was terrific. As per usual, Austin McDonald was again a mainstay through the engine room with 28 touches, while bigman Wyatt Ryan contributed 20 disposals, 21 hitouts, and a goal, and Matthew Borlace continued his solid form.

Western Jets graduate Daly Andrews collected 18 disposals on his SANFL League debut for South Adelaide, as the Panthers earned an important win over Glenelg to jump the Bays in third spot. Capable of playing inside and outside, Andrews also won four clearances and booted a goal as he pushes his case to be drafted. 17-year-old Jason Horne did his 2021 prospects no harm either, gathering 10 disposals and laying five tackles in the win.

Callum Park and Luke Parks are others looking to stake their draft claims after also missing out last year, notching 12 and 11 disposals respectively. Jackson Edwards had 10 touches on his League return, while Brady Searle will have to wait a touch longer to enter the fold, and Luke Edwards will anticipate a return from injury. Victorian and Mitch Martin is another around the mark.

Matching that goal feat was Glenelg’s Jayden Davis, who continues to prove his side’s most productive performer. Davis also had 24 disposals, which was beaten out only by teammates Hagan Wright (30 disposals) and Kye Dean (27) in the Bays’ loss.

Casey Voss and Jed McEntee continue to make the grade for Sturt, with Voss adding another 20 disposals to his tally, and McEntee 13 upon surviving the extended bench. Tom Emmett made the step up to Reserves level for Sturt, while mature-age draft hopeful Sam Lowson made his first appearance in South Australia, running out for the Eagles’ Reserves having made the switch over from VFL side, Coburg.

In the Under 18s, Will Spain (31 disposals, one goal) and Mani Liddy (29 disposals, two goals) stood up in the absence of Tom Powell, but the Double Blues still went down by 25 points. Jase Burgoyne and Caleb Poulter cracked the 30-disposal mark for WWT, while Max Litster (26 disposals, three goals) had a day out. Taj Schofield also fared well upon his return with 20 touches and a goal.