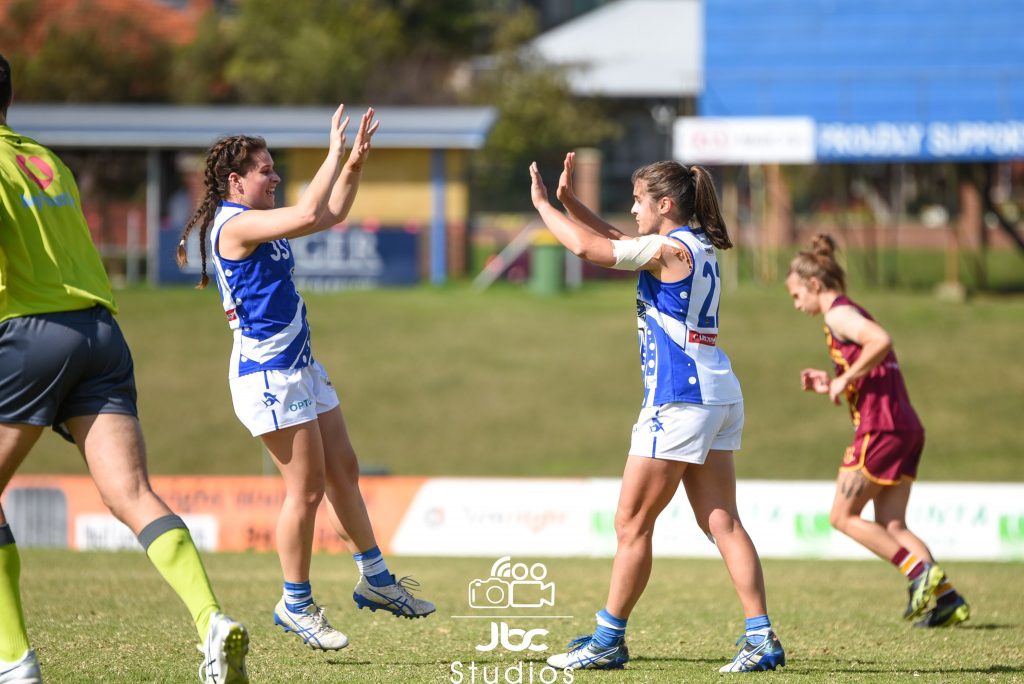 EAST Fremantle has kept its hopes of a West Australian Football League (WAFL) Women’s three-peat alive with another narrow win in Round 6 of the competition, this time over a previously undefeated Subiaco outfit. The Lions almost looked destined to go through the regular season undefeated – not that they had not been pushed by teams prior – with only last placed and winless South Fremantle next week, but the Sharks ensured that did not happen with a season-defining win. It was a remarkable game in more ways than one with the “visiting” Sharks running out at East Fremantle Oval after the game was switched from New Choice Holmes Park.

If the change of venue was not already an omen for the Lions, than a hamstring injury to playmaker Beatrice Devlyn in the opening two minutes was a second roll of bad luck. As the saying goes, bad luck can often strike in threes, and two minutes into the second term, former AFL Women’s talent Lara Filocamo injured her ankle and had to be stretchered off. So just 22 minutes into the 80-minute match, the Lions were two players down and facing a six-point deficit at the first break.

That is to take nothing away from the promising start of the Sharks, who weathered the early Subiaco storm as the Lions had the breeze. A battle within the overall scheme of things was Fremantle teammates, Philipa Seth and Hayley Miller going head-to-head all day in the middle, in what would turn out to be a hotly contested fight with little room to move for two sides that often thrived on creating space. The first eight minutes of the opening term was played entirely in Subiaco’s half, with Jessica Ritchie playing out of the ruck and doing well, while Tiah Haynes was pressing high after coming off half-back and having an influence.

When the ball went down the Sharks end, Rosie Walsh took a strong contested mark and then gave off the quick hands to Gabby O’Sullivan in another contest moments later for the East Fremantle forward to kick their first score of the game. It would be a theme in the first term, as the combination worked again, with Walsh contesting, the ball falling to ground and O’Sullivan pouncing with a great crumbing goal. By quarter time, East Fremantle led 1.2 to 0.2 as O’Sullivan had the entire team’s score.

Janelle Cuthbertson was having some sort of game at full-back, keeping the former Lion and dangerous goalkicker, Sara Lewis in check whilst providing great run from defence. Katelyn Catalano had an early chance in the second term but hit the post, and from then, both defences stood up well. The teams tried to open up the game as Ruby Schleicher foiled a potential goal-scoring opportunity for the Lions with a one-on-one, and went for a four-bounce run down the wing later in the term to set up a goal-scoring opportunity for her own side. The Subiaco defence led by Tarnica Golisano was up to the task, spoiling the taller Walsh well to rush it through for a behind.

Neither team ended up putting through a major in the second term with just three behinds kicked for the entire quarter, including a gettable miss from the reliable Angela Stannett whose tackling pressure had been a highlight. Like many others, her set shot drifted for a behind, while O’Sullivan was pulling out the party tricks off the outside of the boot up the other end. Another snap, this time from Kahra Sprylan went begging into the post, and then a second chance off Sprylan’s boot was touched on the line by Holly Hyder. Haynes and Cuthbertson were crucial in keeping the Sharks goalless with the breeze, but Subiaco was still yet to kick a goal in the match.

That breakthrough goal finally came in the ninth minute when the clear best on ground in terms of her impact in O’Sullivan pounced with a snap after great work from Sprylan up the ground. The latter had won the ball, bounced off a couple of would-be tacklers then spun out of the contest to five her teammate a chance. As Lewis and Cuthbertson clashed in the marking contest, O’Sullivan swooped on the ball and slammed through a clever goal nine minutes into the quarter.

As if that had spurred on the top of the table Lions, Subiaco had its chances now, and knowing it had to take some advantage with the breeze, had a few forward forays. Haynes and Lindal Rohde were particularly driving the ball long, with Liana Burchell having a shot, but the reliable Julie-Anne Norrish rushing through another behind for the Lions. Not long after, Subiaco finally broke through for the long-awaited goal thanks to a deep forward 50 entry off the boot of Ritchie giving Danica Pisconeri a great chance one-on-one with the 2019 league best and fairest winner clunking it and then slotting the goal with five minutes remaining.

Both Chloe Reilly and Lewis had chances down the other end to stretch the lead out, but both put it out on the full with Reilly’s from a tough angle flying across the face, and Lewis from a shank set shot. Sensing the importance of not conceding another goal, Miller floated back into defence to take a strong grab and settled down the team to allow time off the clock and siren to go with her side only eight points down with 20 minutes to play.

O’Sullivan continued her ripping performance with some dangerous kicks inside 50 that put the Subiaco defence under all sorts of pressure. After kicking a coupe of herself in the first three quarters, the Fremantle AFL Women’s talent set up Catalano with a perfectly weighted kick to her advantage as the forward read the ball in flight well to mark and then goal. Five minutes into the quarter, the Sharks led by 14 points and it looked like a tough job for Subiaco to come back, kicking into the breeze.

Both defences remained steadfast by repeat stoppages and getting back to help out, though the teams were not without highlights. Cuthbertson burnt off Lewis after winning a one-on-one and had a four-bounce run down the wing, and then Jacqueline Toth had a huge chance in the 12th minute with a brilliant snap around the body. It was on target, but overage defender, Zoe Gillard read it like a book and was on the line to knock it over for a rushed behind. Toth would get a second chance a few minutes later though, with some scrappy work forward by the Lions paying off as Ritchie just kept the ball moving forward for Toth to snap and put it home.

With four and a half minutes remaining in the match, Subiaco trailed by seven points and needed some luck. Miller tried everything for her side, taking a match-record five-bounce run forward to kick inside 50, but the reliability of Norrish was able to see it safely out. It led to East Fremantle keeping it up the other end with O’Sullivan again having a shot on goal, but her shot hit the post for a final behind as the siren sounded not long after for an eight-point win.

It was hard to determine bests in an even game, but Cuthbertson and Haynes were superb for the losing side, with Miller always trying hard. For East Fremantle, O’Sullivan was the difference, while Seth in the midfield and Norrish in defence was outstanding and consistent throughout, making it an awesome contest to watch. The win gives East Fremantle the pole position of fourth, but it will need to defeat Swan Districts in the final round and hope Peel Thunder goes down to Claremont, or does not gain the three percentage points required to steal fourth. Subiaco had already secured top spot, with more than a 100 per cent difference to the second placed Swans, but the Lions will be keen to finish off the season well and not hold back against the winless Bulldogs in the final round.

In other results, Swan Districts further established its claims as a premiership contender, knocking Peel Thunder out of the four with a seven-point victory, whilst Claremont enjoyed a 56-point win over South Fremantle. It was all the youth who starred for the Swans in the victory over Peel, as Shanae Davison (three goals), Mikayla Morrison (two), Olivia Cripps (one), Bianca Webb (one) and Nyra Anderson (one) all aged 20 years or younger. For Peel, Courtney Rowley, Greta McKinley and Kira Phillips all booted multiple goals, while Bailey Molloy scored one in the loss. For the Tigers, Brooke Whyte and Amy Franklin both slotted three goals in the big win, Mhicca Carter kicked two, and Sasha Goranova slotted one, while Poppy Stockwell kicked the sole major for the Bulldogs in the loss.