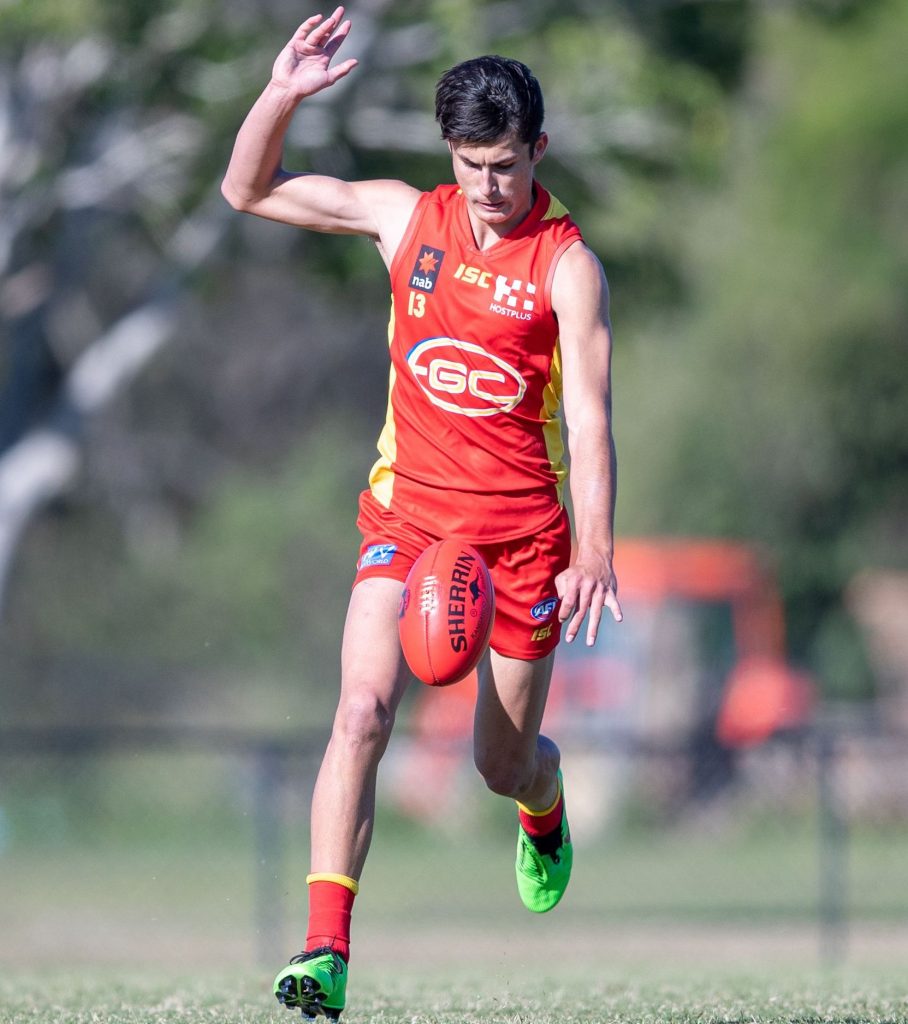 IN continuing our extended Player Focus series, we take a look at a prospect who stood out recently in the Queensland Australian Football League (QAFL) Seniors. This week, we put Gold Coast SUNS Academy prospect Rhys Nicholls under the microscope, as he returned to senior action for the Labrador Tigers in their 50-point home loss to Palm Beach Currumbin (PBC) on Saturday.

Stationed on the wing he occupied for most of the game, Nicholls made a promising start to proceedings. While he began on the outside, the 17-year-old got involved at the contest as soon as each centre bounce went down, attacking every scrimmage on the move and reading the direction of play well. He had a couple of nice moments carving through traffic, as he used his clean hands and agility to weave out of trouble and dish out to runners.

While his first term was overall his best, Nicholls was found wanting in a couple of minor moments. The first was for pace against fellow SUNS Academy product Riley Buckland, who beat him to a loose ball and burned him off to pump the ball inside 50. The second instance came after a nice bit of composure to gather and dispose inside defensive 50, before receiving the ball back and delivering a daisy-cutter with his exit kick. Still, Nicholls was getting to good spots and having an impact on the game with his carry and class.

Nicholls’ anticipation really came to the fore in the early stages of term two, as he continued to attack contests at speed. Running in from the wing once again, Nicholls bolted off the line and wasn’t afraid to throw his bodyweight around at the coalface. He became particularly adept at reading which direction the play was heading, and running to the right spots to either sweep up the ground ball, or receive on the move and generate some forward momentum.

The extra string to his bow came in the form of aerial impact, which he has been known for when patrolling the half-back line. Nicholls used his smarts to read where PBC would look to kick the ball next and hit the packs with courage to create spillages. He would follow up that work with ground ball gets as well, doubling his impact on the play.

Nicholls’ game seemed to go south in the latter stages of the second term though, as he went a little far with his physicality; driving his opponent into the ground for a free kick against, before seeming to rub in the contact to his downed adversary with a bit of forearm action, to put it nicely. After a short scuffle, he was sent to the bench for the remainder of the period.

If he hadn’t already showed his lack of fear in competing against more mature bodies, Nicholls really did so after the main break. His work on the outer consisted of breaking to the open side when Labrador began to transition into attack, but it was Nicholls’ hardness at the contest which better summed up his third term. His strength and presence around the ball was obvious, laying solid bumps to force stoppages, and generally throwing his weight around. It did uncover a slight tendency though, as Nicholls would often seek to bump and hurt his opponent, rather than tackling.

His ability to track back and mop up ground balls in defence remained amid the chaos, with some good aerial efforts proving fruitless, but showing good determination and sound reading of the game. Nicholls may have been sucked in on a couple of occasions later in the term, as he twice caught 2018 Queensland Under 16 teammate, Liam O’Brien solidly and copped some attention from PBC opponents.

After a promising start to the game, Nicholls’ final term was arguably his quietest. It may have hardly been his fault though, with a late move forward proving a touch untimely as PBC began to kick away up the other end. Still, Nicholls continued to roam the outer and proved strong over the ball when his number was called. He leapt for aerial balls until the end, but seemed a touch frustrated as he just missed out on a few marks to taller or better positioned opponents. Nicholls can be damaging with his combination of intercept marking and sharp kicking, but with the latter of those weapons put away for most of the match, his willingness at the contest and reading of the play were what stood out most.