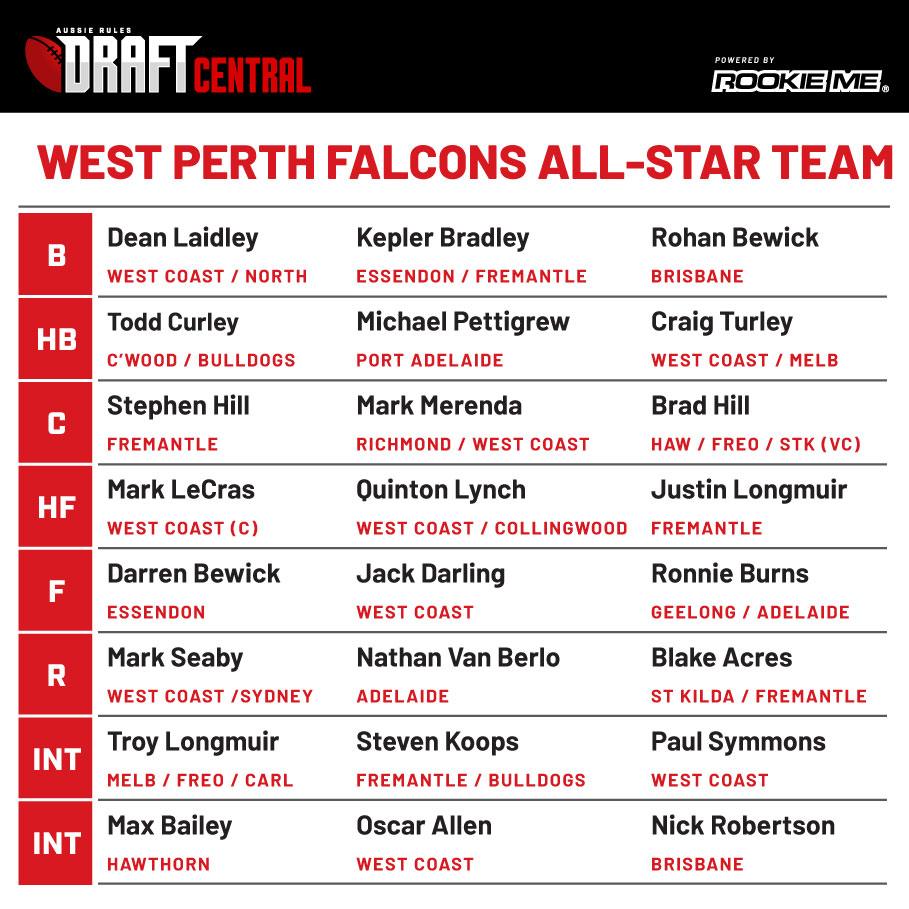 WEST Perth Falcons are a team filled with a mix of tough players and talented forwards predominately from the turn of the century. With a handful of modern day runners, West Perth would be a competitive unit against most sides from the All-Star Team of the AFL Draft era series.

West Perth has six players who reached the 200-game mark at AFL level and lead the way, whilst a number of others are getting close to that feat, with Brad Hill the best of the current players, if not of the entire Falcons contingent to come out of the program. Whilst their forward line has talent and they have plenty of speed, their key position players are definitely less experienced than other sides.

The key backs in Kepler Bradley and Michael Pettigrew hold down the key back positions, playing a combined 220 games, with Bradley also capable of playing a role up forward. They are surrounded by more experienced players in the medium and small areas, with ex-Eagle and Kangaroo, Dean Laidley playing the 151 games and has earned a place in the back pocket. Craig Turley is one of the most heralded players in the side, only playing the 131 games, but winning a best and fairest and All-Australian honours in that time.

On the other half-back flank, Todd Curley stands with 118 games and 48 goals to his name, with the more recent AFL addition of Rohan Bewick in the back pocket, just surpassing the 100-game mark with 103 games and 25 goals. Also able to roll through the defence are Brisbane’s Nick Robertson, and former Eagle, Paul Symmons, while ex-Docker and Bulldog, Steven Koops could provide some versatility off the bench too.

The midfield has a real mix of players with the Hill brothers in Brad and Stephen owning the wings. Brad won a best and fairest and three flags, starring for the Hawks and most notably Fremantle before crossing to the Saints. Stephen has spent his career at the Dockers and had 206 games to his name prior to the season. In the centre is Mark Merenda who was an exciting mid/forward who booted 88 goals in 101 games for the Tigers and Eagles.

Onball, former Crows captain Nathan van Berlo (205 games) and Blake Acres (75 games prior to 2020) sit, with Mark Seaby the chosen ruck. Seaby played 120 games across a golden era for West Coast and then Sydney, but missed out on playing in a flag. His replacement on the bench is the unlucky Max Bailey who had repetitive knee injuries and was restricted to just 43 games, but did play in a premiership.

An exciting attacking end for sure, the Q-Stick in Quinton Lynch is at centre half-forward alongside fellow 200-gamer Mark LeCras. The Eagles premiership player has the most accolades of any West Perth player, achieving an All-Australian, best and fairest and All-Australian 40-squad nomination. In the forward pocket, another 200-gamer in club games record holder at AFL level, Darren Bewick (238 games, 232 goals) who played in a couple of flags, the only former Falcon to play in more than one premiership.

Rounding out the front six is modern day forward, Jack Darling who booted 378 goals and has now passed the 200-game mark for the Eagles, earning an All-Australian honour along the way. Ronnie Burns was a dangerous forward at the turn of the century, booting 262 goals in a 154 games, while current Fremantle coach Justin Longmuir kicked 166 in 139 to earn a spot on the half-forward flank. Coming off the bench is his brother, Troy Longmuir who managed the 83 games and 49 goals. Oscar Allen is the key position replacement at either end, but predominantly forward, who will be another off the bench.

There is not a great deal of depth from the AFL era, but there were a handful of players who amassed more than 50 games. Derek Hall (76 games, 77 goals), Digby Morrell (72, 59), Brendon Fewster (70, 43) and Wayde Skipper (60, 20) all deserved mentions for their efforts. Marcus Adams (38 games) was on the cusp of making it in, while Josh Rotham, Jaxon Prior and Ben Johnson are all recent additions to the AFL system.