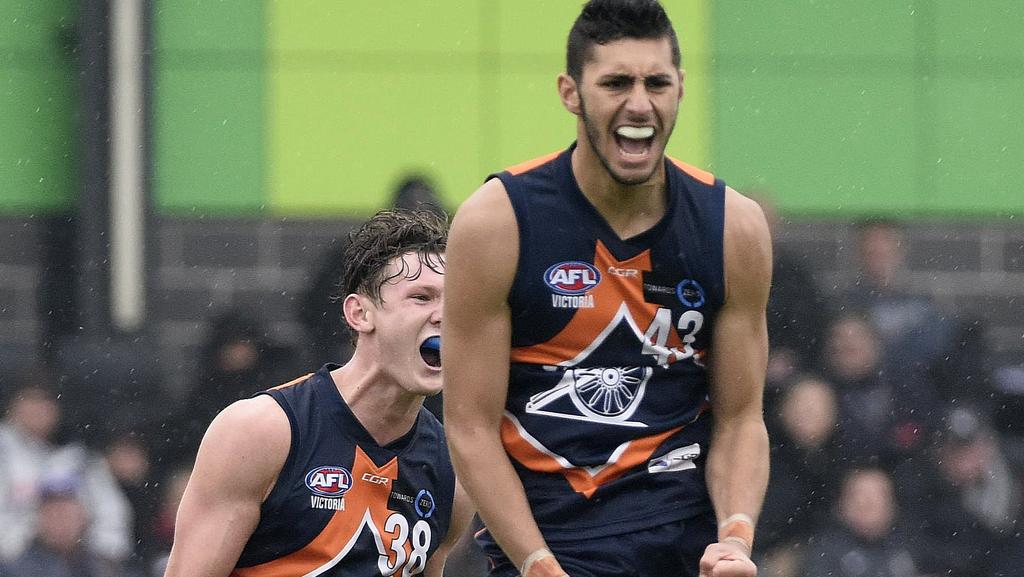 IF you are missing footy like we are, then let us somewhat salvage that with a look back in our series of Classic Contests. In today’s contest we look at another clash between the NAB League rivals to complete our full series, and today’s battle is between the Gippsland Power and Western Jets. In this edition, we wind back the clock to early 2017, when the two sides went down to the wire in a game of heavy momentum swings.

Conditions at Highgate Reserve often blanket the ability of even the most potent match winners, but all the rain and wind in the world could do little to stop Muhammad Saad in early June, 2016. The brother of Essendon speedster, Adam put on a seven-goal show to inspire his Calder Cannons to a comeback victory over the Oakleigh Chargers in Round 9 of the TAC Cup season,

The Cannons needed something special to turn their season around, sitting 10th with two wins from eight games – including losses in their first four outings, and two in the last fortnight. Oakleigh was faring a touch better in seventh at 4-4, but had lost three of its last four games in what was the start of a mid-season skid. The Chargers would also go in without a considerable amount of top-end, top-age talent, including the likes of Josh Daicos, Nick Larkey, and Ed Phillips.

But through the weather and absentees, Oakleigh showed its class with a five goals to one opening term, making much better of its eight scoring shots (5.3) compared to the hosts’ six (1.5). The buffer would remain relatively the same heading into the main break, as the Chargers got out to a six-goal lead, but had the margin reigned back to 21 points at half-time.

Saad had already clicked into gear, booting a couple of majors to keep his side within reach, before flicking the switch midway through the third term to help the Cannons hit the front. The game was on the line with Calder ahead by two points at three quarter time, and the ascendancy would change hands multiple times in the final term. Saad proved the difference again, putting the Cannons back in front for good as they ran out eight-point victors.

With seven of Calder’s total nine goals, the number 43 was inevitably named best afield for his remarkable exploits inside forward 50. Ben Ronke was one of two other Cannons to hit the scoreboard, with fellow draftee Zach Guthrie played his part up the other end of the field. Adam Moate booted three majors for Oakleigh, while Xavier Jordan was named the most valuable Charger.

The result proved somewhat of a turning point for the Cannons, as they shot back into finals contention and eventually finished the regular season in seventh (8-9). The Chargers landed in sixth with an identical record, but exacted revenge with a 106-point elimination final belting, before eventually going down in the preliminary finals to Murray.