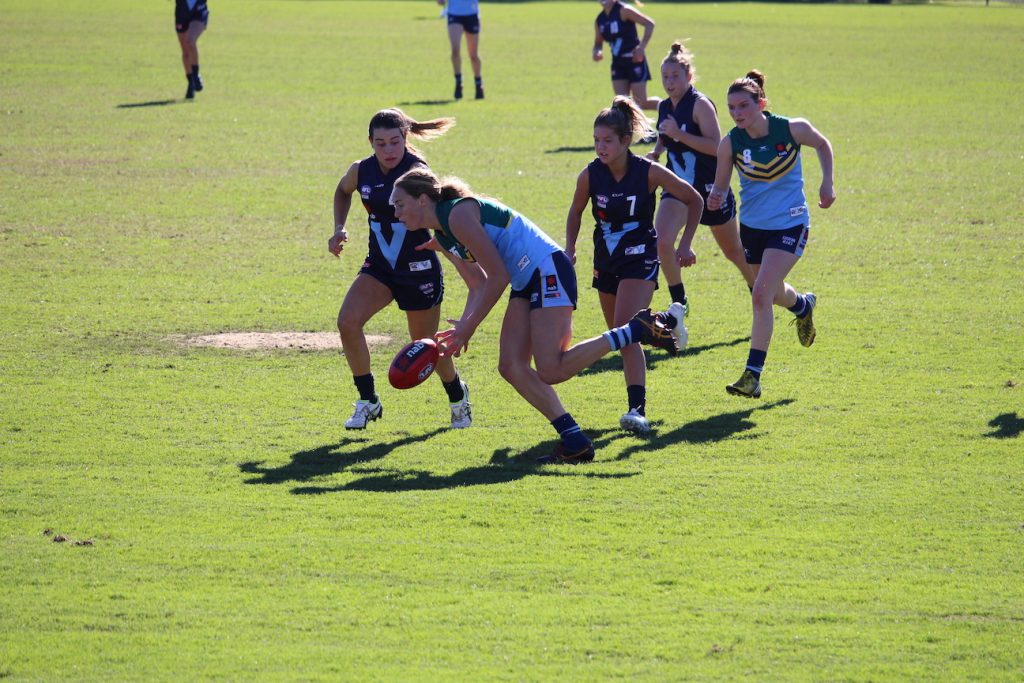 GROWING up in the New South Wales coastline suburb of Tathra, Tarni Evans was always involved in sport, be it soccer, athletics or as she has become more synonymous with lately, Australian rules football. The AFL Women’s National Academy member might be a good three hours drive from her home town, running out for Queanbeyan in the AFL Canberra league, but she is edging closer to her dream of playing AFL Women’s football.

“I was at Tathra footy club when I was 13/14 I think and I played in the women’s comp because that was the only comp that they had at home for the girls,” Evans said. “I played there for two years and then started to do SESA training which was the South East Sports Academy training in Canberra. I was doing that every Wednesday arvo and driving up to Canberra for that and then it was my third year of footy and my brother was in Queanbeyan and he was playing for Queanbeyan Tigers and living with the captain of the women’s team, Hannah and her partner.”

Hannah was Hannah Dunn, a football talent herself heading to the Gold Coast Suns with Pick 22 in last year’s AFL Women’s Draft after also spending a season with South Australian National Football League (SANFL) Women’s side Norwood earlier in the year.

“Hannah asked if I’d come up and have a game with us sort of thing so I went up and played for the rest of the season for Queanbeyan. “So I played half a season with Queanbeyan and have been with Queanbeyan ever since. “Moved up to Canberra when I was 17, I turned 17 last year and moved up here and I’ve been up here to pursue my footy career from then until now.”

It sure beat Evans and her parents spending 12 hours on the road a week, and the talented midfielder immediately noticed the difference running out for the Tigers each week.

“At home it’s kind of because there’s only a women’s comp for the girls, so it was pretty much any age group from 13 up, that was all playing women’s it was a mixed bag really,” Evans said. “We struggled for numbers for the first year at Tathra, so it was the beginning of it all. It was the first girls comp down at the coast. “So it was a massive difference coming up, it’s such a high level up here for sure, quite a shock.”

“(It’s been) a lot of fun,” Evans said. “Met some really awesome girls and had some great opportunities to learn some stuff. “With the SESA stuff that leads into the Rams, and then you get to travel with the team and go into Allies if you get picked for Allies. “So you’ve got a whole lot of different people and opportunities to learn. “That pathway’s been great.”

Evans described the feeling of running out on Metricon Stadium as an “awesome experience” and “a bit of an eye-opener” because of the ground’s ability to echo such was its size. Luckily Evans did not have to share the experience alone, as Tigers’ teammate Jayde Hamilton and AFL Canberra peer, Emily Pease, also members of the Eastern Allies squad and AFL Women’s National Academy, joined her.

“Having Jayde and Emily has been amazing, it’s been so good. “Like we’ve been bouncing off each other and helping each other improve. “It’s been so fun having Em and Jayde to share all those experiences with and help each other train. “You have two best mates from footy who are doing the same stuff as you and have the same interests, it’s been so good having those two around and coming through all the different pathways with them.”

One of the most memorable trips of Evans’ life was the National Women’s Academy journey to Darwin, something the teenager admitted was unlike anything she had ever experienced.

“It’s probably the best city I’ve been to, it was so much fun,” Evans said. “It’s such a different climate it felt like you were in a different country really. It was awesome learning, we learnt so much about hydration and training in the hot. “It was just a cool experience. “We were training one night in Darwin and we had to get put under the covers because it started storming and it was a lightning storm, and then 10 minutes later it was sunny and hot again and sweaty. “It was wild, it was so much fun though.”

Evans’ strengths in football include her marking and penetrating kick, admitting that she likes to “run amok” on the field credit to her athletics background. She is working on her marking and her ability to read the play better, knowing when to release the ball at speed to best impact the game. Having played soccer, nippers (surf club) and athletics – the latter where she ironically met Pease – Evans has settled on Aussie rules as her sport of choice.

“I think it was the team aspect,” Evans said. “I had done heaps of athletics, and it was such an individual sport. “Like I had done high jump and you’re so isolated from the individual (sport) and when it came to a team sport it’s just so much fun having people to share footy with. “The contact with it as well, being able to tackle people. “But mainly being with a group of girls that have got the same interested.”

Her goals for 2020 were to build up her strength returning from injuries in 2019, something she copped earlier this year with a minor ankle injury, but she was able to rehab well with the interrupted preseason and now she is back at Queanbeyan.

“I started the preseason and did that at the start of the year,” Evans said. “We were doing all the preseason then it got pushed back with all the COVID stuff and I went home for a while. “So footy wasn’t on and it started a few weeks ago. “The first few games I didn’t play because of injury, but back now. I think I had four or five weeks off during that COVID bit during the break. “I’ve had great help from Scott Smith our strength and conditioning coach for SESA and Rams, he played a massive part of getting me back to footy with injuries and also improving my strength and conditioning letting us use his gym Myogen.”

Still at school, Evans said it could be tough to juggle her education, work and football commitments, but all her teacher and coaches were “really understanding” of her position, and accomodating her to live out her dream.

“I’m in Year 12, I’m finishing off school,” she said. “I’m doing a trade once a week with school, so working with school at the moment. “It’s just a communication really. “I’ve had to get pretty good at communicating with different coaches and teachers and making sure everyone’s on the same page so I can try and stress a little less about handing in work, so it’s getting at communicating a little better and everyone’s really understanding.”

As for how her dream of playing at the elite level is tracking, Evans said she was just focusing on the now and looking to maintain her fitness, stay injury-free and play the best possible football she could with everything else out of her control.

“This year, I’ve been injured a fair bit last year, so I’ve mainly been focused on getting myself back and just enjoying my footy so not being on the sideline rehabbing,” she said. “So mainly it’s just getting my body strong and healthy and play footy and play a few games and have a bit of fun. “Then improve with that and play my best footy and see where I go with it.”