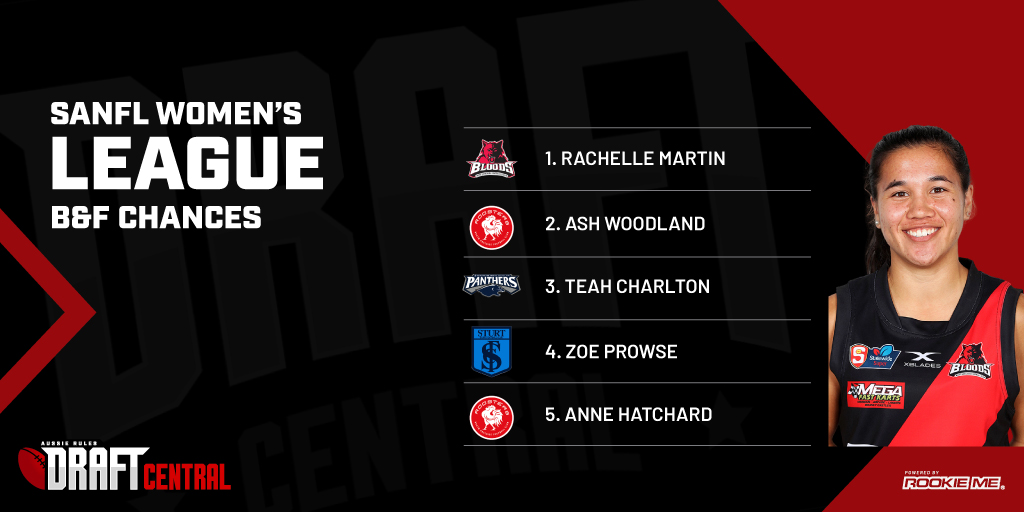 TONIGHT is the night that the South Australian National Football League (SANFL) Women’s Best and Fairest award is run and won ahead of Sunday afternoon’s decider. From 7.45pm, the league will announce its top player of the season, as well as the SANFL Women’s Team of the Year. North Adelaide’s Ashleigh Woodland already claimed the leading goalkicker award this season, and is among a host of favourites for the overall gong.

The midfielder played consistent four quarter football throughout the season to be named among her team’s best seven of a possible 10 times this year. The only issue for her will be that Central only won a couple of games, so if she picks up votes it will be the minor votes. Still a ripping season.

Last year’s club best and fairest winner in Sonneman has held up at full-back throughout the year and has dash and dare which catches the umpire’s eye. Rosenzweig was unstoppable when on fire and took out the club’s leading goalkicker award again with 14 majors in 10 games, while Allan only played the six games, but will no doubt pick up some votes as she was among the best on ground even in some losses.

The Bays are a tough one to determine because they had players that stepped up in different games, but probably not enough, nor enough wins to really cement a standout player for the award. Gould is one who catches the eye with her ruck work, forward craft and goalkicking, and she played seven games which is more than the other AFL Women’s talent on the list.

It was a very even team performance this year from Glenelg, and hard to determine who will take the votes. It is imagined that they will split the votes very evenly this season, with teenager Freeman always a popular one with the coaches – eight of 10 bests – as well as the tenacious Franson working hard, and Kellock rotating between midfield and defence.

Coming off a brilliant season where Woodland claimed the SANFL Women’s goalkicking award, the mid/forward also shone being named among the best in nearly all of her matches. She looms as the top chance from the minor premiership-winning side, but in terms of votes, expect it to be spread.

Legitimately there could be a list into double-digits such is the depth of the club. Hatchard should rack up multiple best on grounds and despite only playing the five games, could pick up double-digit votes easily. Ewings is eye-catching with her speed and ability to hit the scoreboard, with the 16-year-old having a remarkable debut season. Pope is another who catches the eye with her run down the wings, but she played a couple less games than the others which may hurt the voting chances.

Much like North Adelaide, the players will share votes and it could well be one of a number of players who gets lucky enough to poll plenty. In this case we have opted for Zander because of her ability to hit the scoreboard, provide forward pressure and also run around the ground. But there could be half a dozen names that deserve to be there.

Last year’s winner in Allen always has to be considered given it is proven she catches the umpire’s eye. With only six games this season though, will it be enough? She had others who will fight for votes off her such as the reliable Armitstead who could really be a surprise packet for the Redlegs in the vote count, while Macolino burst onto the scene late and was named in the best in each of her six games.

It feels like even when Charlton is not amongst the best players on the ground, she does something that catches the eye in the match that umpires will remember later. While it is hard to pick how South’s votes will go down with so many players lining up, Charlton will no doubt be amongst it given how much ball she wins and can kick goals.

As already mentioned, it is likely players will take votes off each other with the greatest depth going through the list. Meyer might be the most consistent of the lost each week, whiler Campbell managed the eight games which should be enough for votes ahead of some other AFL Women’s talents. Tahau always does something that features in the highlights so will naturally attract votes.

The 2021 AFL Women’s Draft prospect might be a sneaky chance here, but it will depend on how favourable the umpires are to giving votes in a losing team effort. Prowse was by far the most dominant ruck in the competition for a stretch with her athleticism and consistency despite being overwhelmed on the scoreboard, which is where it might not quite be enough as the votes will likely be minor ones.

The co-captains were consistent all year and Bevan will arguably attract the most, potentially even more than Prowse given league best and fairests are midfielder’s awards. Rigter has worked hard throughout the season, while Harris has stepped up playing every game and was named amongst the best six times.

For the overall winner, our prediction is pocket rocket Martin. The uncompromising midfielder was named among the best just about every single week and deservedly so. She made our Team of the Week seven times, and the Westies won more than enough games to suggest she will pick up some threes for best on ground.

When it comes to umpire votes, it is often those who catch the eye the most, and the Bloods have no shortage of players that fit the bill. Venning had a huge season through the midfield and playing forward, Newman has a super boot that you cannot miss, and Thompson was a match winner on more than one occasion. They might split the votes as a team.

The Eagles were the most even team in terms of best players this season in our opinion, and Lee just gets the nod for her work at both ends. Kicking 11 goals in 10 games, which included playing out of full-back late in the year, her contested marking and long kicking will no doubt be something the umpires look at for votes.

It is hard to pinpoint those who will take the votes given the evenness of the team, but Zecevic was one of the most consistent Eagles throughout the year, Maher provided line-breaking speed out of defence, and Blanden was always solid through the middle going forward.

It is far from obvious which way the votes will go this year, but our tip is West Adelaide’s Rachelle Martin who had the most consistent season of any player, and was able to play every game. Others who will challenge her include Teah Charlton, Ash Woodland, Anne Hatchard and possibly Zoe Prowse.