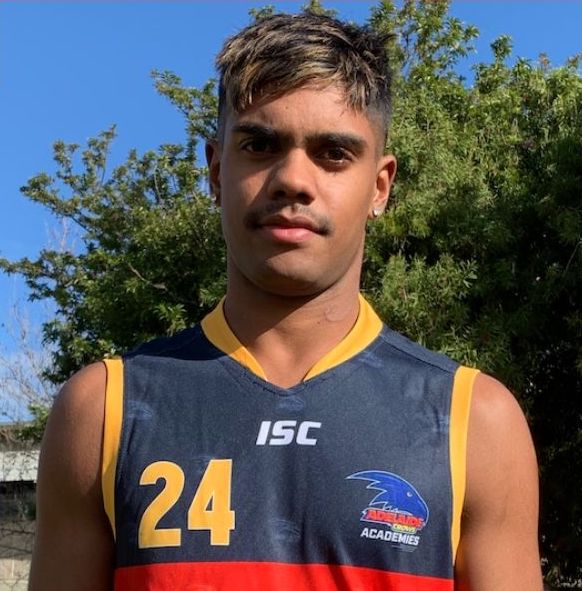 Next under the microscope in our AFL Draft watch is North Adelaide’s Tariek Newchurch, an exciting small forward with electric speed and x-factor in spades. The 181cm prospect is tied to the Adelaide Crows’ Next Generation Academy (NGA), giving supporters of the rebuilding club something to look forward to for years to come. Newchurch returned an impressive bottom-age campaign last year, booting 29 goals in 17 SANFL Under 18s outings, while also earning a Reserves berth. He is currently averaging a goal per game in 2020, having shown glimpses of his match-winning ability up forward. He looms as an outside chance of rising into the top 25 prospects overall.

Newchurch was North Adelaide’s other AFL Academy hub member to return to SANFL Under 18s duties, and again showed glimpses of his raw talent. The Adelaide Crows NGA hopeful has terrific agility and evasiveness, and constantly utilised that aspect of his game on Saturday. He was often sighted running hard up the ground to find the ball and create a spark for the Roosters with inboard kicks, while also getting busy close to goal. Newchurch’s ability to collect the ball from forward 50 stoppages at speed was outstanding, and almost earned him a goal on multiple occasions. While the pop in his set shots came under question early on, Newchurch eventually found the big sticks with a nice snap in the second term.

SANFL Under 18s Round 4 vs. WWT Eagles

It was a patchy display from the Adelaide Next Generation Academy (NGA) hopeful, who looked lively on the ball but could not quite inflict the usual damage – going goalless from his 15 disposals and six marks. Nonetheless, Newchurch was clean in full stride and looked to make things happen with his various twists, turns, and creative passes going forward. He was forced to work up the ground early to find more ball, but had a set shot fall short from 25 metres out once he gained an opportunity inside 50. It didn’t stop the speedy Rooster from linking up well at half-forward, as he gained separation to be the primary marking target as North Adelaide won the centre clearances. Newchurch has a terrific leap and sticky hands on the lead, making it an effective ploy.

SANFL Under 18s Round 3 vs. Glenelg

Newchurch had some close company and found it tough to get going in the early stages, pitted against Glenelg’s Hagan Wright. It wasn’t a good day in front of the scoreboard for Newchurch but he was still able to show off his dazzling speed and agility, and make it clear if given an inch, he can potentially take a mile. Newchurch started to come into the game more late in the piece once Wright was moved off him and he had a great bit of play, taking on fellow speedster Nasiah Wanganeen and winning that dual to show just how quick he is. Newchurch finished the game with 14 disposals and two behinds, but the main stat was zero tackles which he would want to improve to become a complete package as a small forward in future.

SANFL Under 18s Round 2 vs. Norwood

The Adelaide Next Generation Academy (NGA) prospect looked ominous whenever the ball was in his vicinity. As draft watchers have come to expect from Newchurch, his skills at ground-level were excellent. The forward’s burst of speed threatened to break the game open on a couple of occasions and his tackle numbers don’t reflect the pressure he inflicted on Norwood defenders.

He was thrown on-ball at stages and showed a willingness to get involved in the play instead of simply camping out in the forward 50. He laid a wonderful tackle to earn a free-kick inside 50 in the second term, but the resultant set shot hit the post. Newchurch showed class and composure when he gathered the ball deep inside 50 and snapped a brilliant goal under duress. While he probably didn’t have the four-quarter impact he would have been after, there’s no denying the talented Newchurch will feature prominently for SA at the upcoming National Championships.

SANFL Under 18s Round 1 vs. West Adelaide

A tale of two halves for Newchurch, who went from an okay first half to a match-winning second half. It was clear even in patches through that first half he has the capability of doing something special with terrific speed on the lead, and great evasion techniques. He took a strong mark despite front-on contact about 40 metres out on a 45-degree angle, but his shot drifted to the left. His ability to get out of trouble was evident in the second term by earning a free kick for being held at half-forward.

The second half was something special though, as Newchurch stepped up to boot three goals, the first of which came eight and a half minutes into the third term. He received the handball and snapped around his body under pressure and then six minutes later kicked another one from a bit further out but with the same technique to sail home. Later in the term he took a great mark on the lead with his hands stretched in front of him, but the shot drifted across the face. His third goal game was the sealer when he lead out inside 50 to take a strong grab and put it straight through the middle. Not only did he finish the game with his execution, but he also applied pressure to opponents inside 50.