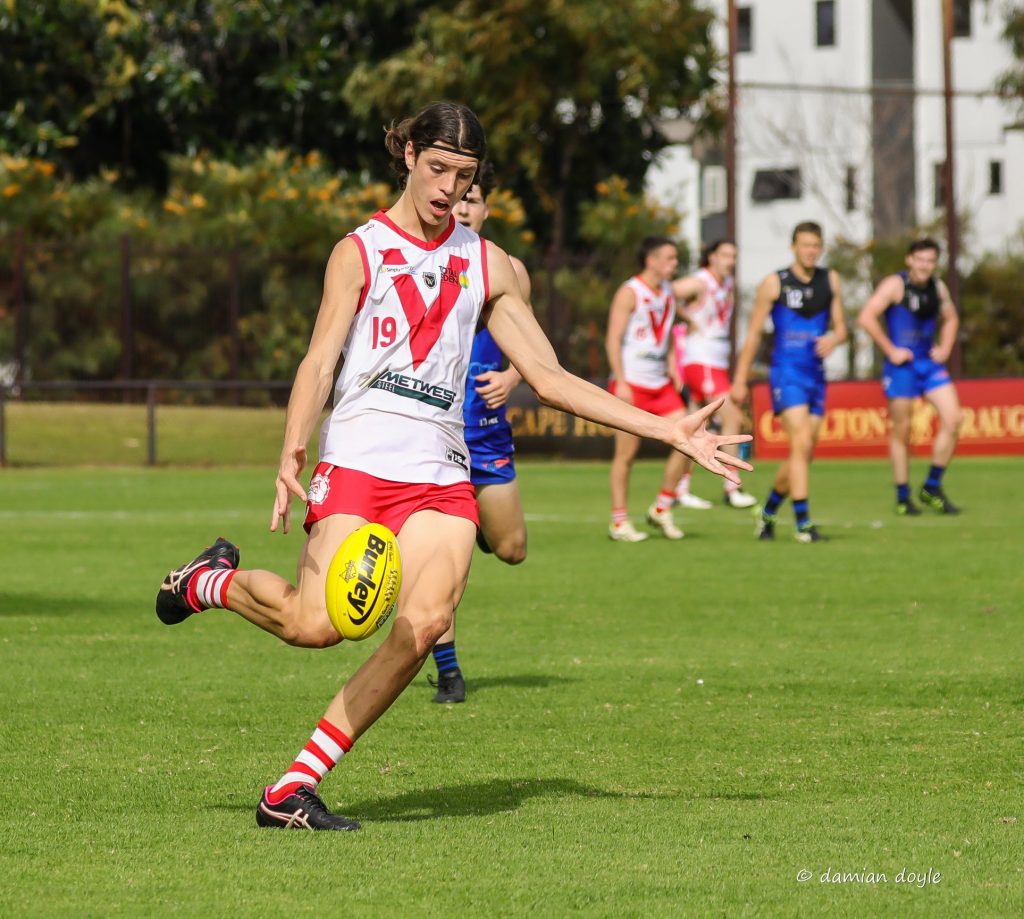 THIS week’s WAFL Colts match of the round was played between South Fremantle and Swan Districts, with the Bulldogs edging home by 10 points at Fremantle Community Bank Oval. West Australian correspondent Lenny Fogliani was on hand to deliver a match report and scouting notes on the most outstanding players.

The first goal of the game came in the fourth minute of the opening quarter, when Neale speared a pass to Jacob Plunkett, who duly converted his set shot from a difficult angle. Dylan Brockbernd was able to cleanly gather the ball out of a pack, before snapping through the Swans’ first goal of the game. Moments later, Luke Taylor took a fantastic pack mark, before nailing his set shot. In the dying stages of the quarter, Morgan Bropho kicked a goal for the Bulldogs.

In the opening stages of the second quarter, South Fremantle’s Drage took a strong mark inside attacking 50, before slotting his first goal of the game. Soon after, Taylor took a strong one-on-one mark, before scoring the instant reply for the Swans. Before the end of the half, Brockbernd snapped through his second goal to give the Swans a 17-point lead at half-time.

After the main break, Jermaine Pickett weaved his way through traffic before spotting up Bellchambers in the forward pocket. Bellchambers went back and converted his set shot from a tight angle. Sears produced a moment of magic for the Swans, when he gathered the ball on the defensive side of the wing, took two bounces before nailing a great running goal from 50 metres out. Ethyn Kane, soon after, kicked another goal for the Swans.

Angus Fraser then snapped through his first WAFL Colts career goal, and all of his South Fremantle team-mates got around him. After receiving a bullet pass from Pickett, Baxter Jones kicked his first goal of the game. In the final stages of the third quarter, Pickett was able to find Plunkett inside 50, who kicked the goal that brought the Bulldogs within four points of the Swans.

In the final quarter, Julian Hulten and Jones kicked goals for the Bulldogs which ultimately secured them the victory over the Swans.

The Kwinana product was magnificent on the half-back line for South Fremantle, often intercepting the Swans’ attacking entries, before rebounding the ball out of defence with class. He accumulated a team-high 20 possessions, grabbed seven marks, laid four tackles and recorded four inside 50s.

The 2018 WA U16s State Academy member was excellent on the wing for the Bulldogs, providing a great link-up between defence and offence. He finished with 19 possessions, a game-high 10 tackles, five marks, three inside 50s and a goal in a strong outing.

The 17-year-old was at his imposing best for South Fremantle, finishing with 10 possessions, four marks, four tackles, and two goals. He kicked the opening goal of the game, when he converted his set shot from a difficult angle in the fourth minute of the first quarter. He also kicked an important goal just before three-quarter time that brought the Bulldogs to within four points of the Swans.

In his first game of the season for the Bulldogs, Drage was excellent; gathering 19 possessions, recording four inside 50s, taking three marks, laying four tackles and kicking a goal. The highlight of his game came early in the second quarter when he took a strong mark inside 50, before duly converting his set shot.

The 2020 WA State-Based AFL Academy member showed why he is one of the premier ruck-forwards in the Simply Energy WAFL Colts competition. Neale finished with 15 possessions, 21 hit-outs, four marks, and three inside 50s.

The Kwinana product showed flashes of brilliance that would excite the Bulldogs’ faithful. He only gathered eight possessions, but Pickett also recorded three inside 50s and three goal assists. The highlight of his game came early in the third quarter, when he weaved his way through congestion before chipping the ball to Bellchambers, who kicked a goal. He also set up goals for Jones and Plunkett with bullet-like passes.

The Kalamunda junior continued his exceptional season with another polished performance for the Swans. He finished with 29 possessions, four marks, four tackles and three inside 50s.

The 2020 WA State-Based AFL Academy member was excellent for the Swans, playing as the rover. He finished with 21 possessions, a game-high six inside 50s, three tackles and a goal. The highlight of his game came in the third quarter, when he gathered the ball on the defensive side of the wing, before running off, taking two bounces, and drilling a great running goal from 50 metres out.

Playing at centre half-back, Collins was rock solid for the Swans, showing why he is one of the better defenders in the WAFL Colts competition. He accumulated 15 possessions, laid six tackles and recorded three inside 50s.

The 2017 WA U16s State Academy member was solid for the Swans, playing as the ruck-rover. He finished with 15 possessions, five tackles, four marks and two inside 50s.

The 2017 WA U16s State Academy member was lively on the half-forward line for Swan Districts. He accumulated 14 possessions, laid four tackles, recorded three inside 50s and kicked two goals. He kicked the Swans’ opening goal of the game, when he cleanly picked up a chaos ball out of a stoppage before snapping through the goal.