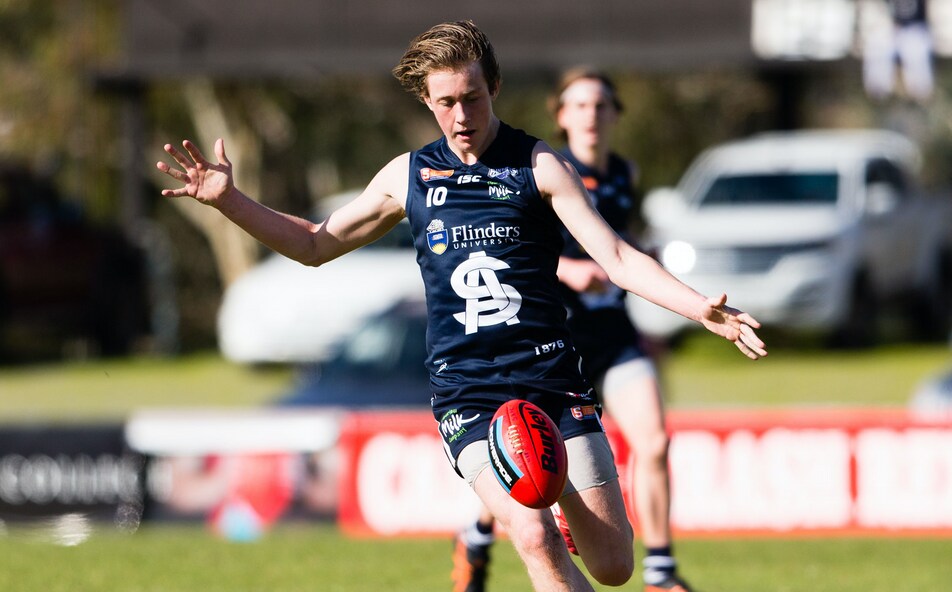 THE TOP junior prospects from South Australia rolled on into Round 8 of the SANFL Under 18s competition, with a number of standouts continuing to emerge. In this edition of Caught the Eye, we have again compiled a list of the best and most promising performers from across the weekend, with one representative from all eight SANFL clubs. For extended profiles on each AFL Academy member listed, click on their names highlighted in red. For our full weekend scouting notes, click here.

Our scouts said: “Phillips was clearly the best ruckman on the ground and his connection with his fellow midfielders was a cut above the rest… (he) was willing to get himself involved at ground level, laying a couple of nice tackles and winning three clearances for himself.” – Tom Wyman

Verdict: Phillips has had a few up-and-down performances this season, but is a terrific ruck prospect at his very best. The Eagles leader has a sizeable vertical leap and looks most notable at centre bounces, but has steadily improved his ruck craft around the ground and is beginning to follow up his aerial work at ground level. If he can string together some performances like this on a consistent basis, he’ll only improve his stocks as a draft hopeful. That will be the key, staying well-rounded and consistent.

Our scouts said: “Cook has rocketed up draft boards in recent weeks and the hype will only continue to increase after he won South Adelaide the game off his own boot… along with his speed, Cook’s penetrating delivery inside 50 was exceptional… Cook’s expert use of the body in marking contests, combined with his vice-like hands and damaging leap proved too much for the Eagles defenders to handle.” – Tom Wyman

Verdict: Cook is the flavour of the month in terms of risers up draft boards, and took another significant step forward in confirming his status as a bolter. The way South Adelaide turned to him to win a game off his own boot reminded us a little of the exploits of Dylan Williams in 2019, though Cook still has a ways to go to be considered that highly as a talent. The x-factor he brings with high marking and highlight reel goals makes for an exciting forward prospect, and he looks in good shape to continue his upward trend.

Our scouts said: “After a steady debut outing, Lake made it two wins from two games with a much-improved performance. He was a constant through the midfield, able to win his own ball in-close, while also utilising his strong running capacity to accumulate on the spread. Lake was a touch fumbly early and had to make a few adjustments to find his range by foot, but had no trouble in front of goal with a major in the third term.” – Michael Alvaro

Verdict: The NT junior is settling in nicely at Central District, and has played a hand in the Bulldogs breaking through for consecutive wins. He has a nice balance of traits, which allow him to be utilised in a range of positions. While Lake’s ability to spread and accumulate makes him a likely half-back/outside type, he showed he is just as comfortable running on the inside of midfield. His tackling pressure was great on the weekend, and he can also pop up with some solid overhead marks. Simply getting game time under his belt should boost his stocks.

Our scouts said: “While he has proven near-unbeatable at getting to the ball around stoppages, Powell has been expanding his game to win more uncontested possessions around the ground, while also attempting to utilise a touch more run-and-carry. That sharp disposal in-tight remained though, as the Double Blues midfielder was simply cleaner and more aware than any other ball winner on the field.” – Michael Alvaro

Verdict: Call it repetitive, but Powell remains the standout for Sturt. While the midfielder shows his best form on the inside with pin-point releasing handballs, quick reflexes, and clean hands, his willingness to add strings to his bow shows a terrific hunger to develop and become a more complete prospect. His uncontested possession rate seems to have lifted over recent weeks upon the expansion of his tank, and the running side to his game has also become apparent. Powell is as reliable as any midfielder in the current crop, and continues to push for first round consideration.

Our scouts said: “Looking at the stats after the game, it was no surprise that Borg was the leading disposal winner on the ground. The midfielder worked incredibly hard at stoppages and on the spread, regularly connecting well with teammates to transition the ball forward effectively. He provided an option coming out of defence whenever necessary, rarely fumbled, and showed that he has great hands under pressure.” – Tom Cheesman

Verdict: Borg has put together an outstanding month of football and capped it off with another huge performance. While accumulation and inside ball winning have often been his MO from midfield, the diminutive midfielder added goals and even more forward half impact to his game over the weekend. With some serious talent out of the North Adelaide side, Borg’s lift in output has proven important to the Roosters’ cause.

Our scouts said: “I highlighted Gilbert as a player to watch a few weeks ago after his performance at half-back against South, and he showed some more promise in this contest. He played predominately through the midfield in this one and showed his ability to win contested footy. His kicking was a major asset for the Bloods once again, as he frequently found a target when delivering the ball inside 50.” – Tom Cheesman

Verdict: Gilbert is another top-ager who has stepped up during the mid-season slog, thriving in the midst of being trusted with a touch more responsibility. His move into the midfield has been particularly crucial given Bailey Chamberlain recently earned a Reserves berth, with pressure and presence around the contest the key features he brings to the table. If Gilbert can keep up a consistent level of performance and help West Adelaide improve on its winless campaign, it’ll put him in good stead.

Our scouts said: “While others may have won a touch more ball, Dean was one of the more impactful midfielders across the day for either side. His presence around at the contest and strength to burst away complemented his ability to gets first hands to the ball well, making him difficult to stop… Dean was clean in possession with one-touch gathers and efficient disposal by foot, bringing a sense of calm to the fast-moving game.” – Michael Alvaro

Verdict: Glenelg has been one of the sides hardest hit by the ongoing school football season, with the Bays’ depth well and truly tested of late. They came up against some pretty stiff opposition in Round 8, but Dean was one to stand up to the task. A handy part of South Australia’s title-winning Under 16 squad in 2018, Dean remains the same type of hardened ball winner he first appeared as. He has hardly grown since then, but is well built and uses that power in the clinches. He’ll need a few points of difference as a small inside type, which his forward craft should bring.

Our scouts said: “Stationed at half-back, Verrall ran hard off the line at centre bounces to initiate some run-and-carry when either gifted a handball receive, or at the base of a spillage. He looked particularly lively in the early stages with some neat accumulation in the back half, only daring to break the lines when required in open play.” – Michael Alvaro

Verdict: The latest 16-year-old SANFL talent to catch the eye is Verrall, not to be mistaken for South Adelaide tall, Will, of the same age. His work in propelling the Redlegs forward from behind the ball was impressive, and Verrall was not afraid to get stuck in. While experience and time will help him adjust to the speed of the competition, Verrall boasts enough skill and knows how to get involved in the play to suggest he can have an impact this year.