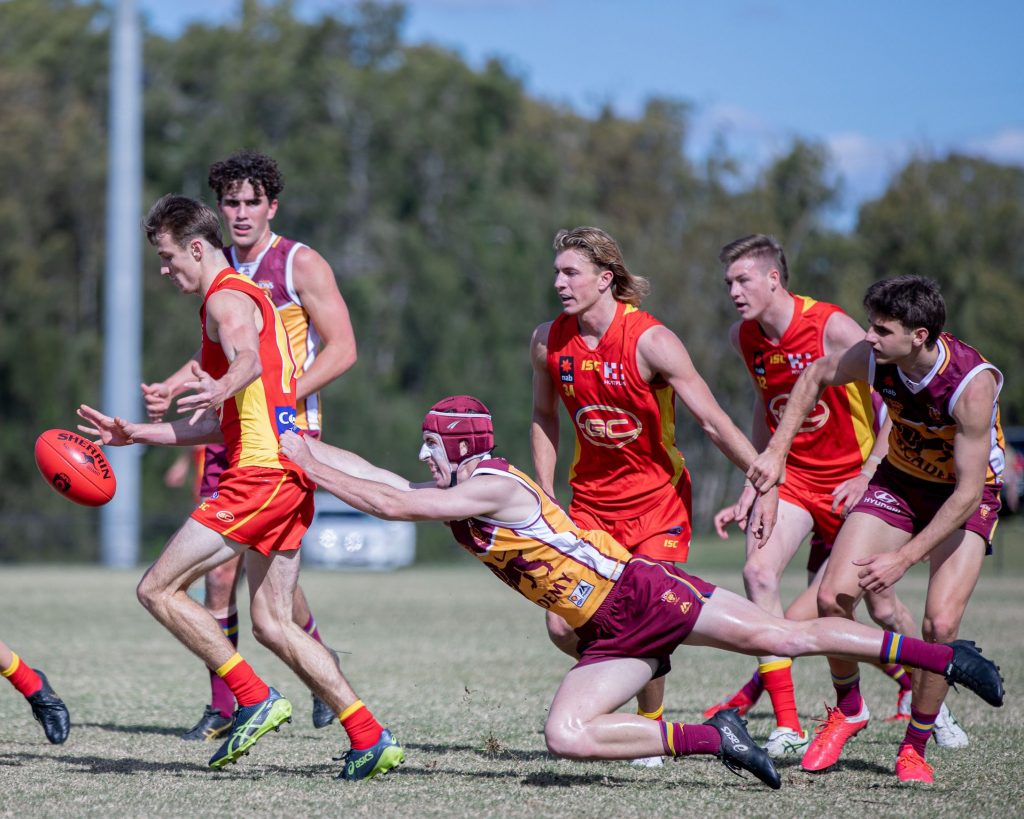 SYDNEY Swans and Gold Coast Suns academies have won back-to-back games against the GWS GIANTS and Brisbane Lions academies in the second round of the Northern Academy Series over the weekend. The Swans had a much easier time than the Suns, always looking in control of their match on their way to a dominant 53-point victory over their state rivals.

Hosting arguably the two biggest NSW academy prospects in Braeden Campbell and Errol Gulden, the Swans midfield was superb, providing equal measures of grunt and pace in getting the ball from defence to attack in an instant. The pair were running down the ground and creating opportunities for their teammates, with Campbell getting on the end of a brilliant goal, and setting up a teammate for another with a four-bounce run from the wing to inside 50. Gulden started in the unfamiliar half-back position, but his speed and skill allowed him to be a danger coming out of defence.

Sam Thorne was a clear standout for the Swans, continually working hard through the middle, and arguably could have been best on ground for his four quarter effort and tackling pressure on the opposition. Along with Thorne through the middle, it was the attack of Reed van Huisstede (four goals) and Liam Puncher (three goals) who applied all the scoreboard pressure. Other Swans who impressed included overager Sam Gaden, who looked comfortable in defence alongside Max Geddes. The deep Swans midfield of Campbell, Thorne, Nick Brewer and Marc Sheather ultimately powered the Sydney side to a big win.

For the GIANTS, they had just the one multiple goalkicker in Fraser Kelly who kicked two, while Logan Berryman, Liam Delahunty and Maximus Monaghan all snagged one apiece. It was no surprise to see Josh Green – the GIANTS’ top rated Academy prospect – named best-on despite the defeat, once against throwing himself at the contest and doing everything he could to get his side across the line. Among those also named in the GIANTS’ best were Sam Frost, Harrison Grintell, Drew Beavan and Daniel Turner in what was ultimately a day where the younger side was outclassed by a more polished Swans outfit.

In a game of two halves, the midfield battle proved crucial in deciding which side would snatch the momentum. Gold Coast dominated the opening stages, booting the first four goals of the game on the back of contested work from the likes of Bailey Reeves and Ethan Hunt at centre bounces. The combination of Reeves’ ability to extract, and Hunt’s drive from the contest worked well to get the SUNS on the front foot.

Speaking of, the outside run of Aiden Fyfe and Northern Territory prospect Brandon Rusca also worked well in transition, with the kicking prowess of Josh Fahey and Rhys Nicholls from defence also helping set up some seriously potent Suns transitions. While Fahey looked to penetrate with his long left boot from the kick-ins and deeper in defence, Nicholls more-so utilised strong intercept marking and the nous to run off for handball receives to have an impact.

Skipper for the day, Jack Johnston was a rock at centre half-back, faring well aerially while also contributing to the Suns’ kick-heavy game in the back half at times. He combined well with Joel Jeffrey before the swingman was sent forward, with their reading of the ball in flight ensuring Brisbane had little avenues to go forward quickly. Jeffrey, another prospect tied to Gold Coast through the Darwin zone, showed great class and athleticism in his time up forward. He managed to snare a set shot conversion in the fourth term.

Max Pescud was arguably best afield for the victors though, making a menace of himself at half-forward. While he is still quite light-on, Pescud showed he was not afraid to hit the ball and his opponents hard, and collected plenty of both throughout the day. The forward’s conversion was well off in the first half, but his reward for effort came in the form of two goals, with his first a ripping effort on the run having just burned an opponent.

That opponent was Tahj Abberley, who still proved to be one of Brisbane’s better players across the day. The small utility was as reliable as any Lion afield, constantly looking a class above with his use by foot. He was employed through midfield and rotated out to defence, where his reading of the play and rebound abilities came to the fore.

Another Lions Academy regular, Saxon Crozier was also terrific in a range of roles. Starting through midfield, the Lions captain got his hands on the ball early, but looked most dangerous in the closing stages as he used his long kicking to take the game on. Another usually reliable kick is Carter Michael, who also found plenty of the ball. His radar was a touch off as he looked to initiate some forward movement from defence, but the meterage was there and he fared well with a move into the midfield later on.

Part of Brisbane’s ability to turn the game on its head in the second half came through the likes of Blake Coleman and Bruce Reville. Both players rotated forward through midfield, and looked so dangerous whenever the ball entered their area. Coleman was a particular threat in transition with his clean hands, while over-ager Reville had a massive impact in the third term to give the Lions a sniff.

The pressure of Will Tasker, who booted two goals, and Lochlan Harrop also ensured the Lions took the game down to the wire, with their presence around the ball putting a classy Suns defence under the pump. Brisbane was forced to fight from too far back though, and came up just a goal short despite creating good chances in the last five minutes.