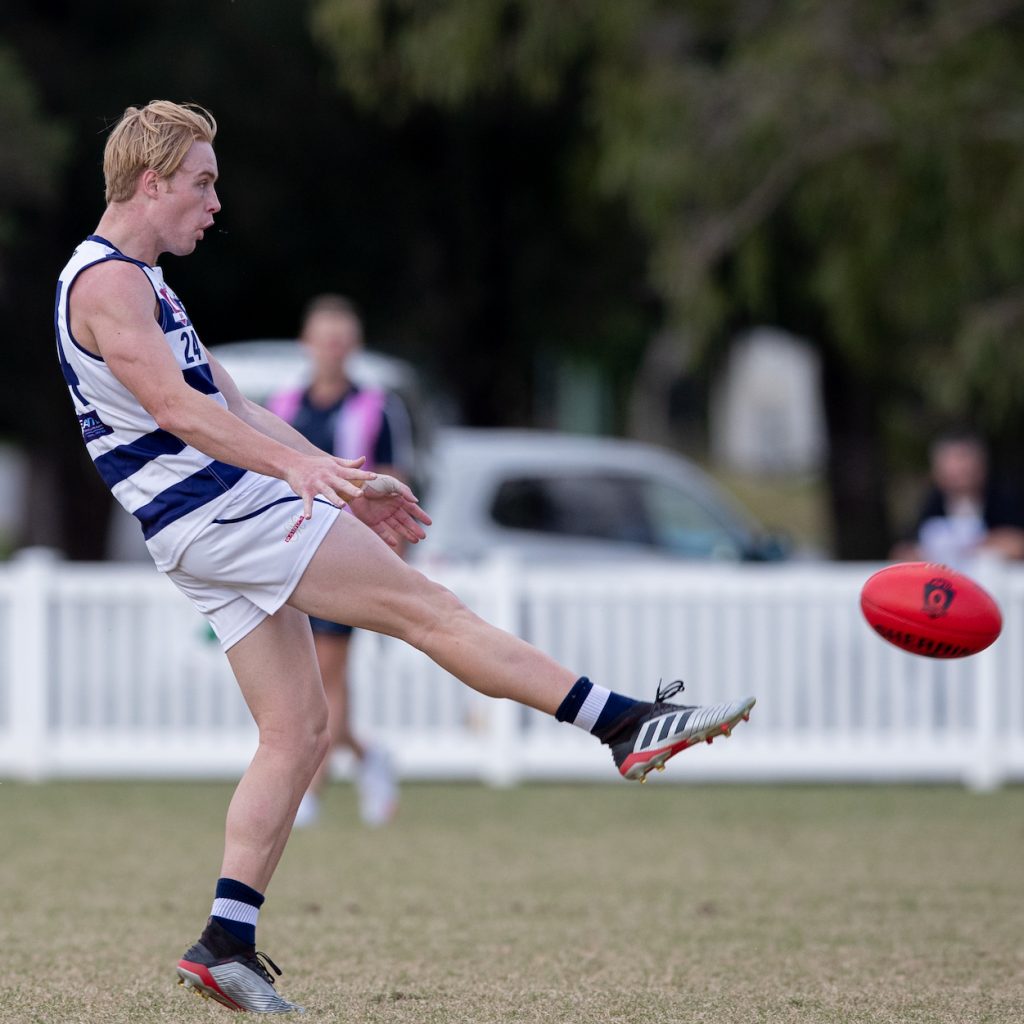 BROADBEACH has stunned Palm Beach Currumbin with a five goals to one final term to run over the top of the Lions in a battle of the two undefeated clubs to claim top spot on the table. The win saw them roar into favouritism for the flag with the other undefeated side in Morningside having the bye. In other results, Mt Gravatt destroyed reigning premiers, Surfers Paradise, while Maroochydore knocked off Sherwood and Labrador picked up its first win of the season with a tight victory over Wilston Grange.

The Cats were the most impressive side of the weekend, getting up in a seesawing contest over one of the genuine title chances this season. Broadbeach booted three goals to one in the opening quarter to lead by 11 points at the first break, before the Lions hit back with four goals to zero in the second term and take an 18-point lead into half-time. Both sides were up for the fight, but the home team looked firmly in control at the final break, booting 4.2 to 3.3 to lead by as much as 23 points at the final break. Then a remarkable final term resulted in Broadbeach coming from the clouds to slam home five goals to one and record a stunning 11.10 (76) to 10.15 (75) win in what could be a grand final preview.

Both sides shared their goals around with 15 individual goalkickers between the teams. Michael Selsby (three goals) put in a best on ground performance for the Cats, as Connor Nutting slotted two in the winning side. Brad Lowe, Tyrone Armitage and Max Lower were also strong in victory, while Max Spencer, Ashton Crossley and Jackson Emblem were best-on for the home side. Jason Burge, Jarryd Douglas and Brayden Crossley all booted two goals in the narrow defeat.

It was a memorable day for the Vultures in front of a home crowd, completely dominating their opponents in a 16.7 (103) to 5.8 (38) victory. The Vultures actually trailed at quarter time, but booted 15 goals to three in the final three quarters to storm to a stunning 65-point thrashing over reigning premiers, Surfers Paradise. Jonah Licht (five goals) and Harry Milford (four goals) did the bulk of the damage for the winners, as Mitchell Hart slotted a couple of majors. Orien Kerr and Jayden Crawley were best-on in the winning side, as Daniel Charlesworth (one goal), Myles Jewell and Sam Jewell were also among the best for the opposition.

Labrador’s winless start to the season ended in Round 6 with a triumphant 13-point victory over Wilston Grange. The Tigers were ahead at the first break in a high-scoring opening quarter which featured 11 goals. The Gorillas piled on five goals to one in the second term and looked to have regained the momentum, but an eight goals to three second half resulted in Labrador winning 15.10 (100) to 13.9 (87). Hugo Barry (four goals) and Bryce Retzlaff (three) were prominent in the winning side, while Angus O’Brien (five) and Lonnie Hampton (three) were equally damaging up the other end for the Gorillas. O’Brien was best-on for Wilston Grange in the loss, while Will McKenzie and Tyler Galligan were also impressive. For the Tigers, Leigh Osborne, Fraser Thurlow and Jayden Young stood tall and helped their side register their first win of the season.

In the other match of the weekend, Maroochydore got back on track with a crucial 12.7 (79) to 6.12 (48) victory over Sherwood. Accuracy proved the key in the end, as the Roos had just the one extra scoring shot but made it count to record a 31-point victory. They led by 18 points at the final break despite two less scoring shots, then came home with a wet sail to pile on five goals to three and win comfortably. Mitchell Scholard continued his goalkicking ways with three majors for the Roos, as Brad Kimberley and Thomas Holt kicked a couple of majors each. Ben Cadzow and Jackson Ryan were deemed the best Maroochydore players on the day, as the defence restricted the usually damaging Liam Dawson to just one major with inaccuracy playing a huge factor. Luca Winton, Ethan Sivijs and Riley Easton were nominated as the Magpies’ best.