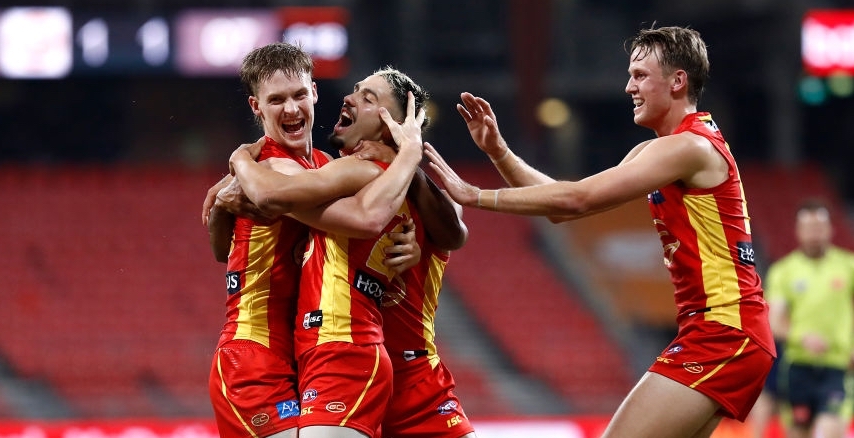 THE NUMBER of recruits from the 2019 AFL Draft to run out for their respective teams on the weekend again spilled into double digits, despite a few youngsters being squeezed out of senior selection. There was plenty to take out of Round 12 for the class of 2019, with a bunch of up-and-comers continuing to stamp their mark on the competition, and two making their debuts. We take a look at how the best handful of them performed.

He cannot earn a second Rising Star nomination, but Anderson put in a shift which would have earn him another undisputed nod. The 2019 number two pick was again terrific for the SUNS as they pushed Richmond all the way to the final term, having a big say going forward. Rotating through midfield from the wing, Anderson racked up the ball with ease for a career-high tally of 26 disposals, constantly finding space on the spread and booting forward from contests to gain good meterage. He put in a strong case to be best afield, and looks so comfortable at the level at this point.

Day is another youngster who has hardly looked out of place since making his debut, and continues to thrive despite some of Hawthorn’s woes. The South Australian again found a good amount of ball, and was able to push it into more advanced areas of the ground. He is a safe outlet across half-back or in transition, while his marking makes him a dual-pronged threat in defence. Day’s ability to intercept and switch the play into attack will be a real weapon for the Hawks in future.

Having been shown great faith to keep his place in the flailing Crows side, Schoenberg is beginning to reap the benefits of being afforded a continued run at the elite level. While not all of his 15 touches were particularly impactful or damaging, the South Australian got his hands on the ball at a good rate and used it well around the contest. He has shown a good balance through midfield, and will inevitably be better for the learning experience, especially with games like this one.

Such is his talent, Serong has had better days at AFL level, but still managed to impact the contest in Fremantle’s heartbreaking loss to Carlton. The Gippsland Power graduate has consistently upheld a remarkably high standard since earning his maiden senior berth, and seems comfortable amid the midfield battle. He showed his ability to stay relevant against bigger bodies at the contest, and did not shy away from the tough stuff. The conditions and frantically contested nature of the game suited Serong perfectly.

Stephens continues to go from strength to strength for the Swans as part of an exciting, developing young group. The South Australian has taken well to his duties on the outside, getting forward well where he can utilise his weapon of a left boot and put the ball into dangerous areas. Stephens found the goals once again in this match, and continues to showcase a good balance of traits with his ability to apply defensive pressure, adding to that outside penetration.