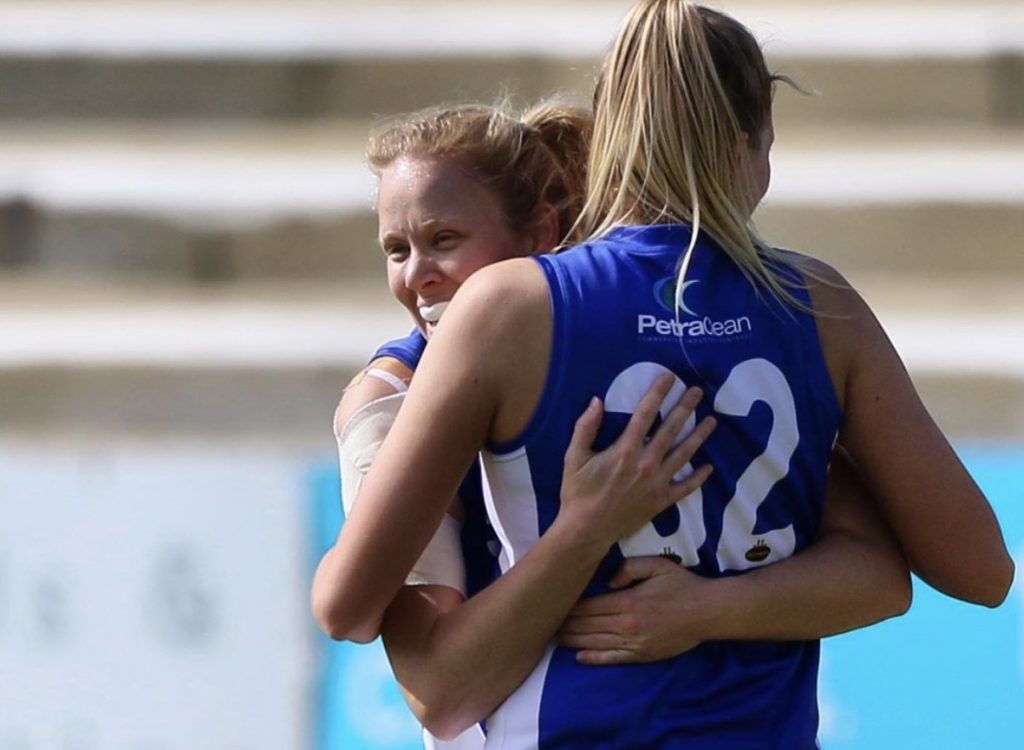 EAST Fremantle has picked up a win in the nick of time, downing Claremont by a point in a hotly contested game yesterday to get the Sharks season back on track. The 3.6 (24) to 3.5 (23) win snapped a three-game losing streak since East Fremantle’s opening round thumping of newcomers, South Fremantle. While there were some nervous moments yesterday, the experience of the Sharks shone through in crucial moments and the reining premiers got the job done by the barest of margins.

The opening term – like most of the game – was owned by the respective half-back lines. While both teams had a number of chances with East Fremantle early, and then Claremont late in the term, no one could strike a major. The experience of Laura Pugh (Claremont) and Philipa Seth (East Fremantle) for their respective sides were rocks in defence, while Paisley Prentice saved a goal against two opponents deep in East Fremantle’s defensive 50 with a timely spoil. at quarter time, the scores read two behinds apiece.

For most of the second term it genuinely looked like the sides might go into half-time without a goal on the board. Seth and Alex Williams were trying to create moves in transition out of defence, while Ruby Schleicher was also prominent with her booming kick from the back 50. Amy Franklin had a chance for Claremont herself taking a couple of bounces in open space, but a cruel second bounce saw the chance go begging. Similarly, Bella Lewis was doing everything she could to break up the stalemate with some crucial line-breaking runs, but just bit off too much at times, run down, but the effort was there.

It took until the 17th minute of the term for a fortunate kick from Kahra Sprylan to land in the lap of Stephanie Sparke who had positioned herself in front and read the ball drop better than anyone else. After missing what could only be described as a gimme in the first term, Sparke made sure lightning did not strike twice and she put through the game’s only major of the first half. The Sharks led by seven points at the half after not allowing the Tigers to score, but were also two players down with Madeline Ross (concussion from a goal-saving tackle in the first term) and Katrina Tinson (nose) ruled out of the game.

Bodies were flying everywhere in the second half as the game opened up a little more, but neither side would concede easily. Brooke Hongell took an unbelievable mark at half-back that left her worse for wear but able to return. This time spectators did not have to wait long for a major with Sarah Garstone getting busy off half-back to bomb it forward and then Bella Lewis‘ ability to hit the contest at speed paid off with a nice placed kick over the top for Mhicca Carter to run into the goalsquare and bomb it home four and a half minutes into the half.

Both sides remained vigilant in their defensive efforts, and it took until the final few minutes for the Sharks to get a response. Chloe Reilly – who earlier had come off due to the blood rule in the first term – put it to the goalsquare where the ball came off Rosie Walsh‘s hands for Sprylan to bounce at the drop zone with a perfectly timed snap from 15m out to hand the Sharks back the lead. The goal impressed Mother Nature enough she brought down heavy rain to end the term.

It seemed as though the Sharks had done enough to lead at the final break, but some late surges by the Tigers resulted in a last-minute set shot to young gun Amy Franklin who won a free kick and nailed the goal for a narrow one-point advantage. The final term would be on for young and old as the experienced East Fremantle battled with the youth of Claremont, though both sides had their fair share of AFL Women’s talent on the day. The Sharks had early chances through Sprylan and Gabby O’Sullivan (twice) who both just missed, though the Sharks had clawed into the lead.

Claremont did not clear the defensive 50 until nine minutes into the term, and while there had been no damage done yet, that was soon to occur. A rushed kick under pressure from the Sharks at half-back went out of bounds, and on the counter attack the Sharks went deep inside 50 for Sprylan to run onto it and goal from the goalsquare and extend the lead out to a game-high eight points. Both sides were cracking in, and while the work of Schleicher and Williams looked to be enough, it would not be the final twist of the game. Claremont almost had a goal in the 14th minute, when Krstel Petrevski sidestepped and opponent and got a kick rolling towards goal only for Larissa Versaci to drag it across the line for a rushed behind and seven-point deficit.

Having missed a golden opportunity earlier through Brooke Whyte on the back of terrific running from Jess Low at half-forward to spoil a contest then run onto it and pass it perfectly for the forward, it looked like the Tigers might have missed their opportunity. But a costly 50m penalty for overrunning the mark at half-forward – with the Sharks defender hearing play on rather than the hurry up – brought Marley Simmons to within 20m out. Her set shot looked far from convincing, but it did all it needed to which was sail through the big sticks.

Claremont would continue attacking in the final few minutes with the Tigers getting the ball to half-forward, but the aggressive run of Williams to win a one-on-one contest and bomb it long to the Sharks half-forward line to be locked up, was enough to have the siren sound and East Fremantle enjoy the narrowest of wins, 3.6 (24) to 3.5 (23).

In other WAFL Women’s results, Subiaco came from behind at three quarter time to post a narrow nine-point victory over Peel Thunder in a top of the table clash. The Lions kicked the final two goals of the game in the last term after trailing by five points at the break to win, 6.5 (41) to 5.2 (32). Aimee Schmidt booted two goals for the victors, while Jade Briggs did the same for the Thunder.

Another multiple goalkicker on the weekend was South Fremantle’s Poppy Stockwell who helped her side to its most competitive effort of the season, going down to Swan Districts by seven goals. Only trailing by eight points at quarter time and only lost the third term by two points, the Bulldogs have looked to have found their groove, though they were unable to take down Swan Districts that strung back-to-back wins together with an 8.8 (56) to 3.3 (14) victory. Fiona Boucher was the dominant force up forward for the Swans with three majors.