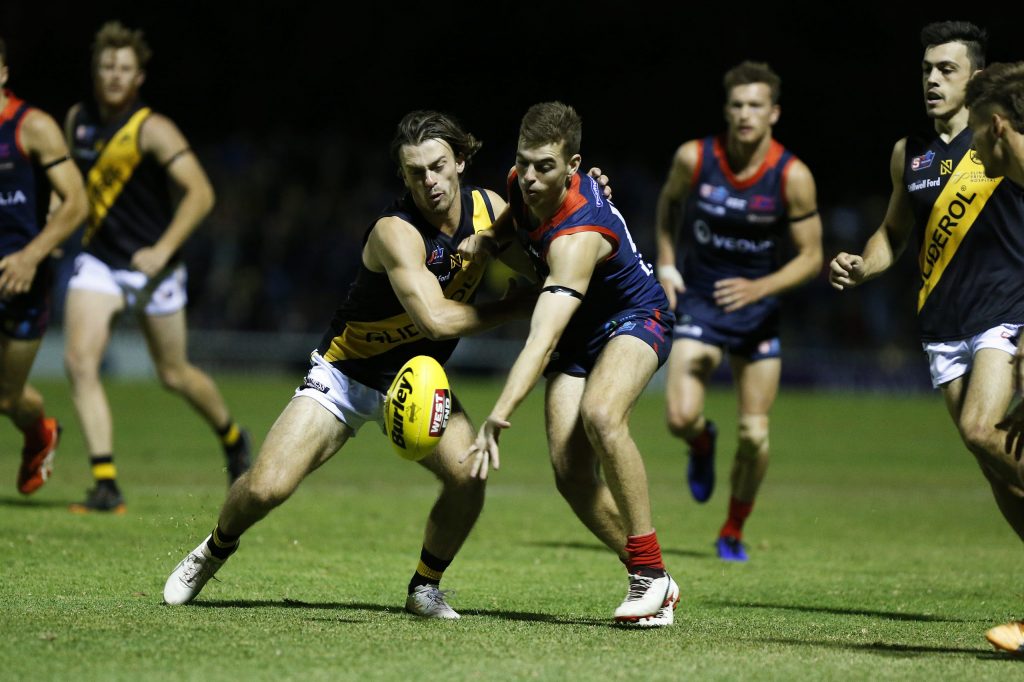 AN action packed weekend of SANFL action saw reigning League premier, Glenelg jump back into the finals placings, as North Adelaide continues to peck at the heels of frontrunner, Woodville-West Torrens (WWT) after a great escape. The Eagles are also soaring atop the Reserves standings, while an upset at the hands of Central Districts saw Sturt overtaken by Norwood at the Under 18s level. All that, and more in our Round 8 recap.

Seventh placed League strugglers West Adelaide very nearly pulled off the result of the round, but came up short by the narrowest of margins against their Northern adversaries under Friday night lights. The Bloods looked to have sealed the unlikely win on multiple occasions as they bridged over two goals clear of the Roosters, and they even had their chances to get back on top late in the piece. It was not to be, as North Adelaide ensured it would remain level on points with the table-topping Eagles.

Harrison Wigg was North’s top ball winner with 33 disposals, followed by the likes of Andrew Moore and skipper Alex Spina on 27 apiece. Will Combe‘s four goals were also important, with two coming in the final term. Jordon Boyle and Brett Turner both found plenty of the ball for Westies, while Connor Fairlie and Hugh Haysman provided a key spark when required.

North Adelaide’s Reserves moved a step closer to finals contention as they dispatched of the Bloods by 52 points, while West Adelaide’s Under 18s remain winless after eight outings on the back of another heavy loss. Elliott McNamara did most of the damage in that game with six goals, but Matthew Borg was arguably best afield for his two majors from 36 disposals, as the Roosters came home strong with an eight-goal to one final term.

South Adelaide’s Under 18s ensured the Eagles wouldn’t get away with a hat-trick of wins over their club, as rising AFL Draft prospect Brayden Cook inspired them to a dramatic come-from-behind victory. Utilised out of the goalsquare in the closing stages, Cook finished the game with five goals from 22 disposals, while Jack Flett’s last-minute behind decided the result.

Bottom-ager Arlo Draper (19 disposals, one goal) was another to turn the game for Souths through midfield, while Harry Spacie (22 disposals, seven marks) was again prolific for the winners. For WWT, the centre bounce trio of Jase Burgoyne (32 disposals, five clearances), Max Litster (30 and eight), and Caleb Poulter (28 and five) again worked well, but could not quite help their side hold on in the end.

The Eagles fared much more comfortably in the senior grades though; as the Reserves remained undefeated with a 43-point win, while the League side led at the final three breaks to get up by 21 points. James Rowe again got busy with four goals, supported by two from bigman Jake von Bertouch, while Sam Overall booted three for Souths.

With Joseph Haines kept quiet, Joel Cross (24 disposals) was again the Panthers’ leading ball winner, but Victorian WWT mid James Tsitas led all comers with 25. It was a fitting result for Eagles 200-gamer, Matthew Goldsworthy, who found the goals in his memorable milestone outing.

Sturt remains just a game off the League top four after pumping Central District to the tune of 65 points, leaving the Bulldogs winless after eight games. Conversely, Centrals enjoyed another big win in the Reserves, picking up their seventh victory. The Dogs’ Under 18s discovered that when it rains, it pours, as they picked up a second-straight victory, knocking Sturt off top spot in the junior ranks.

The League result was won by way of the Double Blues’ much superior firepower after quarter time, and Jake Sutcliffe was the man to reap the most reward with a game-high six goals. He led a pack of five Sturt multiple goalkickers, with no Bulldogs player able to replicate the feat. James Battersby and Abe Davis were mega through midfield with 33 touches each, while James Boyd and Travis Schiller added a major to their own ball winning exploits for Centrals.

Speaking of ball winning, Tom Powell (39 disposals) continues to lead the way in that department at Under 18s level, but could do little to stop his side slipping to second place with a loss this weekend. Austin McDonald (28 disposals, nine clearances) and NT recruit Brodie Lake (19 disposals, one goal) stood up to the strong Sturt midfield, while Matthew Borlace provided plenty of drive from defence, and Leek Alleer worked well both ways off the wing.

Glenelg stamped its authority as the reigning League premier, cutting short the glory of Norwood’s winning run to rise back into the top four. The Bays got away early and never looked back, coming out 33-point victors on Saturday night. Luke Partington was back to his best with 31 disposals for the winners, bettered only by teammate Matthew Snook (34 disposals), and followed closely by fellow former-AFL player, Billy Stretch (27).

Tommy Pinyon again found the goals for Norwood with two majors, while Brad McKenzie breached the 30-disposal mark, and Mitch Grigg found it 28 times. Elsewhere, the Tigers went two games clear among the Reserves top four, but again had its depth fall short at Under 18s level. Norwood took full toll, claiming a 34-point win, as well as top spot with a formidable 7-1 record.

Academy guns Henry Nelligan and Cooper Murley combined for 63 disposals and 18 clearances on the inside of midfield, while Michael Cavallaro racked up 32 touches on the outside, and Alexander Scali booted three goals. Riley Davis matched that feat for Glenelg, with William Watts (30 disposals), Kye Dean (26), and Jayden Davis (22) all pitching in to continue their solid runs of form.