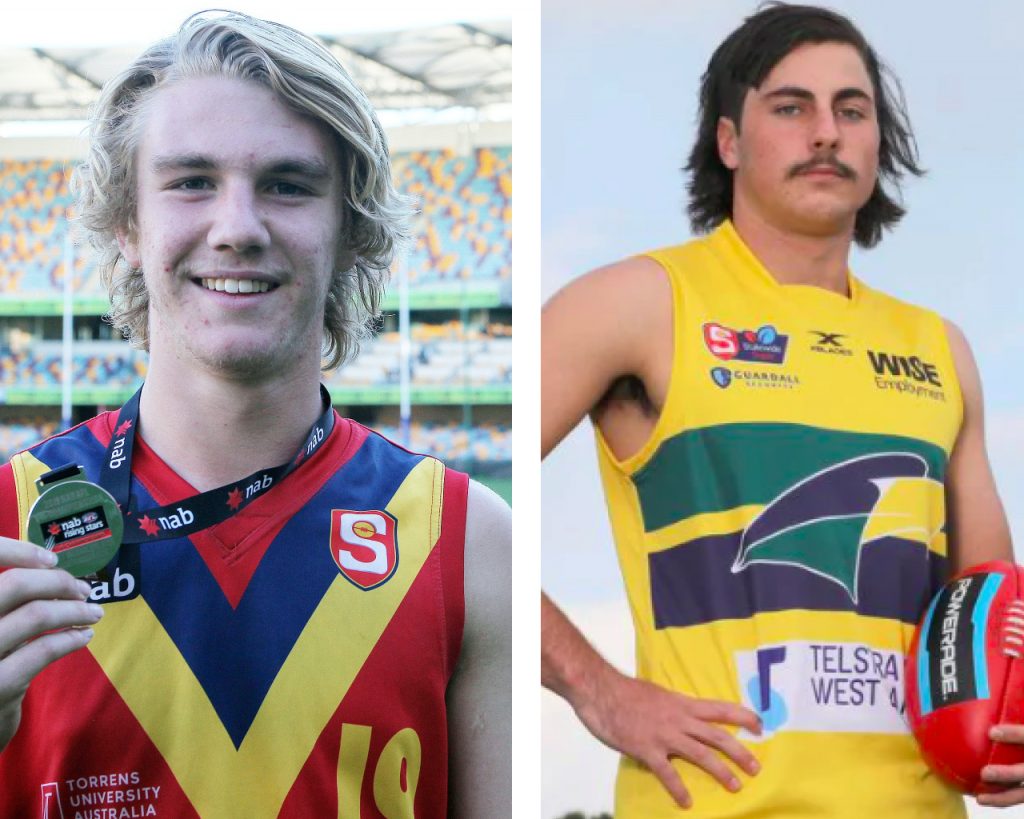 THERE was hope that Jason Horne and Lachlan Jones would line up against each other as South Adelaide and Woodville-West Torrens (WWT) met in Round 8 of the SANFL League competition. Unfortunately, they did not, but either way we still got to see them both show why they are such highly rated prospects. Port Adelaide NGA star Jones is a potential top 15 pick this year, and Horne a likely top five prospect in the 2021 draft. Here is what we saw from the two on Saturday, starting with tough Eagles defender, Jones.

Coming off one of his best games at League level, Jones seems to be getting better and better with every game. He has been given plenty of different roles, with his hardest task against giant full forward Liam McBean, where he gave up nearly 20cm. Part of what makes Jones such a highly rated prospect is his ability to play on talls and smalls with his impressive leap and competitiveness. He was again given a tough task in this outing, often taking on the dangerous talls in South Adelaide’s forward-line.

Jones didn’t take long to get amongst the action with a strong punch in the goalsquare only seconds into the game, and a few minutes later he got his first possession with a nice long kick along the boundary at half-back. Jones played a more negating role, so this was his only disposal for the first quarter.

Jones was more involved in the second quarter, taking a strong mark at half-back around the seven-minute mark and quickly passing off to a teammate running past, although within a minute he would give away a free kick in the middle of the ground. He would have some better defensive efforts though, with a good spoil on his opponent at around the 20-minute mark.

A few minutes later he added to that – cutting off an inside 50, while helping to mop up and lock down at ground level shortly after. He would later be trusted to take a few kick-outs, which he should perhaps do more often. He only further proved he has a big leg with some long kicks to a pack of players at half-back.

It was not an ideal start to the second half for Jones, getting beaten on the lead early which led to a goal, and shortly after giving away a high free kick that led to another goal. Not one to let those efforts get him down, he worked extremely hard for the rest of the quarter – earning a free kick with a strong tackle, although his kick on his opposite foot afterwards wasn’t his best. It would be his only disposal for the quarter.

He had two very nice defensive efforts late in the term, flying for a spoil deep in defence which he would miss, but quickly get back to rush the ball over for a behind. Close to the siren, he would lay another strong tackle at the top of the goalsquare.

Jones left his best quarter until last, where his confidence looked at its best for the whole game. At the 12-minute mark he would show good composure deep in defence and kick long from defensive 50. A few minutes later, he again showed great composure after getting the ball to ground on the wing, using great bodywork to then win possession and kick nicely down the line. Not long after that, he would also have a nice gather and handball on the run, again showing his composure in what was a tough and tight last quarter with the pressure on.

Jones has shown that he really does belong at the level with his athleticism, skills, toughness, and defensive versatility all at a high level, which should all hold him in good stead for when he inevitably debuts in the AFL. He is playing a mostly defensive role, but in time it would be nice to see him play a prominent attacking role where he can use his power and kicking to really break the lines and become an attacking threat from the back half.

The bottom-age talent has been in ripping form in the Under 18s where he has shown so many elite traits; namely his explosiveness from stoppages, strong tackling, overhead marking, and scoreboard impact. They all combine to make him such a dangerous player and almost a complete package as a midfielder. Horne earned his League debut last week and was able to keep his spot again, even getting some time in the midfield despite being so young.

Horne didn’t get involved until almost eight minutes into he first quarter, where he would win the ball at half-forward, handpassing to a teammate in the quarterback position. While he put his teammate under pressure, he would gather the loose ball again very cleanly and go for a small dash, ending with a kick inside 50 to a one-on-one contest.

He had a good couple of minutes at the stoppages not long after, competing hard and staying strong over the ball despite not being able to take clean possession. He would finally win his first clearance shortly after on the wing with a scrappy left-foot kick under pressure. A few minutes later, he won his second clearance on the opposite wing, and at that stage was leading the game for clearances – showing the impact he can have in such a small amount of time.

It wasn’t until late in the quarter that he would win another possession, gathering the ball well with clean hands and then following up with a well weighted kick in the middle of the ground. He would then run the whole length of the ground to almost snag a goal himself near the goalline, putting pressure on the opponent who rushed the ball over for a behind.

Horne had a couple of chances in the second quarter to kick his first League goal, with his first chance coming as he ran past Eamon Wilkinson going into open goal, who ignored him. What made it worse was that the shot on goal was missed anyway, especially at a time which would have helped swing the game in South Adelaide’s favour.

Horne would get his second chance with a much tougher kick after winning a free kick. He would have to have a shot on goal from 50-metres out, which he narrowly missed despite making the distance quite easily, mind you. Horne would not find another possession until later in the quarter, with a mark and short pass in defensive 50.

What became a theme for Horne in the second half was the amount of times he was tackled as soon as he got possession, learning that getting a touch at League level is a lot harder than it is in the Under 18s. The senior boys are bigger and hungrier, especially in a clash where the two teams were looking to win a close contest.

His attack on the ball was still fantastic for a younger player, especially his second efforts to go again and again. He had a mixed bit of play at the 17-minute mark, roving and gathering nicely from a marking contest, but his handball was poor to a teammate inside 50. He would have a better piece of play late in the quarter with another nice, clean gather at ground level, before going on to show a good turn of pace to evade his opponents and kick nicely inside 50 on his non-preferred left foot.

His tough attack on the footy was again a feature in the last quarter, and he would have another good gather at the six-minute mark. Horne almost weaved his way through but just got caught, yet was still able to stand up strongly in the tackle and get a handball out at least. He again got tackled every time he won possession for the rest of the game, so he wouldn’t win another disposal, but he did have a nice bit of play at the 19-minute mark with a smother and strong follow-up tackle.

Horne looks to be building and may not yet have the full confidence oof his teammates, but with more opportunities at League level that confidence in himself and from his teammates will grow. Hopefully then Horne will start to really blossom and show why he is such a highly rated midfielder for the 2021 draft. He might not have cemented his spot, but he will learn so much from his time playing League football and it should hold him in great stead going forward.

>> Get to know: Jason Horne