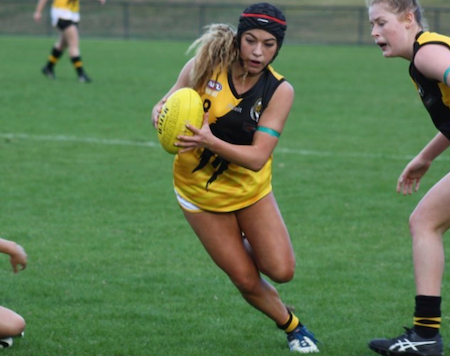 FOR a relative newcomer to the game, Jayde Hamilton has certainly made impressive strides over the past few years. The Queanbeyan Tigers football talent has already risen through the AFL NSW/ACT pathway to earn state representative honours and run out for Eastern Allies at the AFL Women’s Under-18 Championships. Now back in action for the Tigers in the AFL Canberra League, Hamilton is enjoying her football since taking up the sport from basketball, judo and OzTag.

“I have five sisters and one brother and my one brother was playing before us all and we’d go watch him and everyone was like ‘come play and stuff’ and we just started training and then playing,” Hamilton said. “I’ve only played for four years, so by the time I was playing everything was a bit more developed so I didn’t really have to go through where there wasn’t much going on.”

Hamilton said the culture and friendships was unlike any sport she had been apart of, which was a key ingredient for her to remain in the code and reach the highest junior level at last year’s championships. The tough inside midfielder said her teammates became “like sisters” and enjoyed the challenge of developing new skills throughout her journey.

“It was so fun playing the top of Australia,” Hamilton said of the championships. “It was hard, you don’t expect it. “You play club football and then you go there and it’s so much faster and different. It was good time.”

Describing the whirlwind of representing the Eastern Allies, Hamilton said when she first headed to the Gold Coast, she was unaware of what to expect. It seemed like a field trip, but she soon realised just how competitive the opposition would be compared to her local football.

“Everyone is good, everyone has the major skills and everyone is really competitive,” Hamilton said. “When you play at home, it’s not like as competitive, but when you go there it is, which is good.”

She said her kicking and running are two areas she has worked hard on over the past few years to remain strong across the levels, and she is still fine tuning her kicking with speed. Hamilton described her contested work – such as her hardball gets – and her use of her hands in traffic among her greatest strengths on a football field.

While it is a rare feat to make the AFL Women’s National Academy, Hamilton not only achieved that, but did it with a Queanbeyan teammate in Tarni Evans. The duo have been inseparable since they joined forces in the yellow and black, rising through the NSW/ACT Rams and then Eastern Allies together.

“We’ve become so close, we play club football together and always together so it’s become so good,” Hamilton said. “We know each other, on the field, it’s good to have someone you can play with.”

Last year, the reality of the AFL Women’s Draft hit close to home with not only an AFL Canberra opponent in Maggie Gorham getting drafted, but her sister, Lexi Hamilton. Hamilton described it as “just crazy when you see a girl from Canberra actually getting the chance now”. Post-season, Hamilton realised the intensity difference once her sister returned home.

“I think at the start she came back from her season, she’s like it was so crazy and she was so motivated and she was like ‘let’s go for a run’ and it was like she’d changed, she was a different person, it was scary, she was a monster,” Hamilton joked.

Her family have always been a driving factor in her success, with her father and sisters being her biggest inspiration over the journey.

“My dad has always taken us out for a kick and cheering us on,” Hamilton said. “He’s like the dad that gives you tips, but there’s like my four sisters I haven’t played with, but it’s just good to have them.”

While COVID-19 put a major delay on the football competitions, Hamilton has not wasted the time, using Academy running programs to keep fit, and maintaining her skills with her family like she always has growing up. It is that family connection which has helped her maintain her focus for what is ultimately her biggest footballing year.

While the ultimate dream might be to get drafted, the plumbing apprentice said she was focused on achieving success in AFL Canberra. Her goal? To help assist Queanbeyan to a flag in 2020.

“Just play out the season and win the Canberra region and just keep developing my skills and see how we go.”

As for what has driven her to success, Hamilton said she has no issues whatsoever with her natural competitive nature coming to the fore.

“I’m very competitive, so I always want to win which is probably bad and good,” she said. “But it’s having fun, I think that’s still the main part of enjoying it and every moment on the field.”