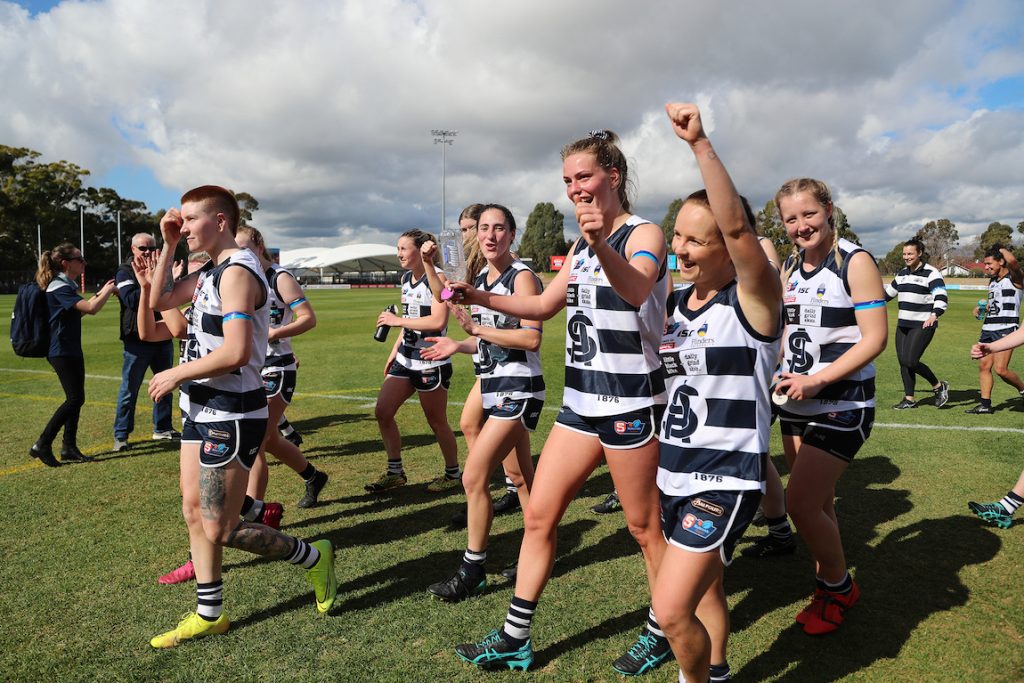 SOUTH Adelaide has given itself the chance to record a remarkable three-peat after downing a determined yet unlucky West Adelaide in the South Australian National Football League (SANFL) Women’s Preliminary Final. The Panthers weathered the early pressure and then got away in the third term, holding off a Bloods outfit in their first ever finals series to record a comfortable 30-point win at Thebarton Oval.

Given the early stages of the game, spectators were not to know which side had the finals experience as West Adelaide brought all the heat to really control play early in the contest. Unfortunately despite forward pressure, the Bloods could not seemingly put one through the big sticks. Abbie Ballard and Rachelle Martin were controlling play at half-forward as the ball did not go past the half-back line for the Panthers as West continually drove the ball inside. Stevie-Lee Thompson looked dangerous in the early stages with a few early chances, while Emma Smith and Chelsea Biddell pumped the ball in deep. Amber James had a chance from straight in front, but her kick skewed to the right.

For all of the Bloods great work, the worst possible scenario happened as the Panthers – with their first inside 50 of the contest – got the ball long and deep, and off a chaos ball inside 50 from Indy Tahau, Hannah Munyard read the ball perfectly off the contest and boot a major against the run of flow at the 10-minute mark of the term. West Adelaide had dominated play but failed to land a meaningful blow, and the reining champions, stunned but not knocked out, showed just what they were capable of. The work of Czenya Cavouras in the back half with her tackling pressure, and Nikki Gore and Munyard through the middle was proving the difference. Tahau almost had a chance herself on the siren, but the ball just slipped from her grasp in the dying seconds.

Tahlia Meyer was arguably one of the most influential on the ground with a terrific pass straight to Jess Kirk in the last 90 seconds though the usually reliable Kirk missed from straight in front, giving the Bloods a let off and only a three-point deficit. After one quarter of play, the Bloods were plus seven on the inside 50s count, but could not put through a major. Then, like a wounded champion that was ready for the counter attack, South Adelaide struck three times in the second term to instead turn the tables on their young opponent and head into the main break with a 21-point lead.

Again it was Meyer who was hitting targets left, right and centre, and when she combined with Kirk for a second time three minutes into the term, the Panthers leading goalkicker made no mistake. An unlucky in-the-back call against Emma Smith deep in defence handed the talented Teah Charlton an easy set shot from 25m out on a slight angle, and she would make it two before the half-time siren. Alexandra Mason had a chance up the other end for the Bloods but her shot from 35m came off hands and rushed through, with work from Munyard a couple of minutes later off the back of a density free kick got it to Charlton who controlled it, kept it in front of her and she kicked the easiest of goals.

South had regained control of the contest with tackling cameos from Gypsy Schirmer and Madison Bennett following the lead of Gore and Munyard through the middle, while Nicole Campbell locked down the dangerous Thompson, limiting her influence. While Martin and Ballard were a couple of standouts, the Bloods could not quite match the Panthers in the second term. Just when the game looked like the sting was out of it in the third term – with West struggling to get it deep and South happy to play controlled football – Biddell worked some of her magic with a monster goal from 50m to sail past the charging back Munyard’s hand on the line, giving her team a small sniff. There was only about 23 minutes left in the match at that stage, but the vital goal drew the Westies to within 15 points.

Munyard was continually getting busy, and while Thompson had a chance to make it two for the Westies, the shot close to goal went a mile in the air and stayed in. The Bloods were getting frustrated by the lack of scoreboard pressure, and Madison Newman and Biddell both gave away 25m penalties, with the last kick of the term going to Charlton for her third. From 35m out she fancied her chances as she came in and began the celebration of icing the game on the siren, only for her shot to cannon into the post as she tried to disguise the premature celebration. Nonetheless, South had a handy lead of 16 points, even with West chewing back a little thanks to the sole goal in the term.

West threw everything they had at South early in the term, but the Bloods were still rushing their kicks inside 50s, and could only muster a couple of behinds. The tackling pressure of South remained, and the likes of Gore, Munyard and Meyer were superb. A forward stoppage six minutes in had the Panthers set up perfectly with the ball falling to Elyse Haylock who slammed it on the boot and sent her team into the grand final with 11 minutes remaining on the clock. Six minutes later, Kirk kicked her second and put the icing on a delicious cake for the second placed side, recording an impressive 6.6 (42) to 1.6 (12) victory to butter up and prepare for the undefeated North Adelaide next week.