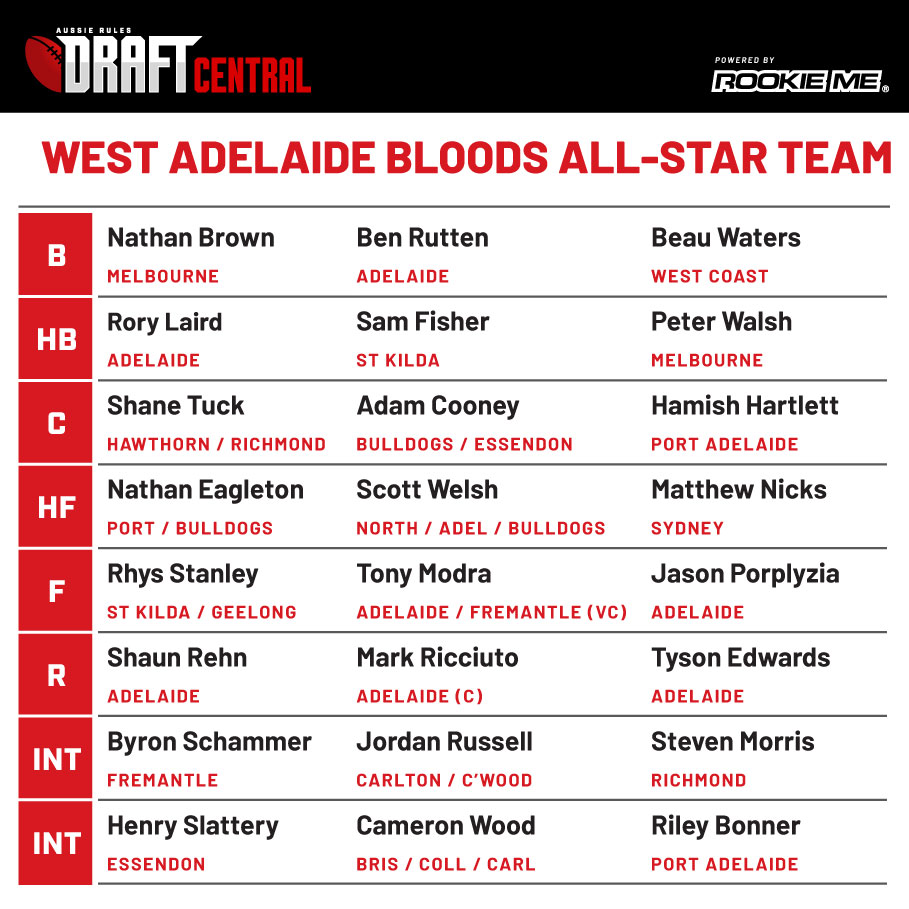 WEST ADELAIDE Bloods have plenty of experience in the starting line-up of their All-Star Team of the AFL Draft era. With a midfield to dream of and a stringent backline, the Bloods have enough about them to really restrict opposition sides from scoring, while having some serious talent inside 50.

The West Adelaide side is arguably the strongest of all the SANFL clubs, with Crows premiership greats Mark Ricciuto, Tyson Edwards, Shaun Rehn and Tony Modra contributing to the sides strong blue, red and gold flavour. The backline has the potential to blanket opposing forwards and the midfield also happens to include Brownlow medalist Adam Cooney. Modra is the obvious focal point up forward, but he is surrounded by a talented array of former-stars.

Former-Crows full-back Ben Rutten leads the West Adelaide defensive unit. ‘Truck’ played 229 AFL games in the tri-colours and is regarded my many as one of the best shut-down backman of the modern era. He is joined in defence by current-day Crow Rory Laird, who recently played his 150th game at the elite level. A dual All-Australian and club best and fairest winner, Laird was an integral member of the 2017 Crows side which came close to winning it all. West Coast premiership defender Beau Waters joins the Crows pair down back. Regarded as an excellent club man off the field and an effective left-footer on it, Waters  was named an All-Australian in 2012 and played 120 AFL games in total.

Pinnaroo’s own Nathan Brown also earned selection in the West Adelaide side, having played 146 matches with the Demons. Brown was a consistent defender during his career at Melbourne, finishing second in the best and fairest in 2004 and fourth in 2002. Occupying the all-important centre-half-back position is All-Australian and two-time St. Kilda best and fairest winner Sam Fisher. Fisher and Rutten kicked just 31 goals in a combined 457 matches, however they would prove very difficult match-ups for opposition forwards. Half-backman Peter Walsh takes out the final on-field spot in defence, having played 139 matches with Melbourne and Port Adelaide.

The Bloods midfield is headlined by a pair of Brownlow medalists in Ricciuto and Cooney. Ricciuto, who won the famous award in 2003 alongside Nathan Buckley and Adam Goodes, is regarded as the most accomplished player in the history of the Adelaide Football Club. Just as deadly up forward as he was through the midfield, ‘Roo’ played 312 games for the Crows and booted 292 goals. An eight-time All-Australian, he accumulated 146 Brownlow votes, won three best and fairest and was a member of the clubs 1998 premiership side, amongst a lengthy list of personal accolades. It came as a shock to many when Cooney won the award in 2008, however the former-Bulldog and Bomber had a terrific AFL career, spanning 13 seasons. His ability to hit the scoreboard ensured he was one of the games best midfielders during the late 2000s. Edwards joins his former teammate Ricciuto in the West Adelaide midfield. A durable and consistent on-baller, he played 321 games with Adelaide, booting 192 goals and accumulating 75 Brownlow votes. Yet another Riverland product, Edwards was a member of the Crows back-to-back premiership sides.

Ruckman Rehn would provide premiership teammates Edwards and Ricciuto with ample supply. A dual All-Australian and inaugural member of the Crows, Rehn was pivotal in the ruck and up forward for Adelaide throughout the ’90s. Hamish Hartlett earns a spot on the wing for West Adelaide for his 164 AFL games with the Power. Despite facing several injury set-backs, he has been a strong contributor for Port Adelaide since being drafted with pick four of the 2008 National Draft. On the other wing is the late Shane Tuck who took full advantage of his second AFL chance after playing for West Adelaide prior to being drafted by Richmond.

The forward-line features more Crows but none were bigger than Modra. The definition of a cult hero, Modra was known for his high-marking and goal-kicking accuracy at Adelaide and Fremantle. The Crows all-time leading goal-kicker, Modra booted 440 goals in 118 games in the tri-colours and 148 in 47 matches with the Dockers. The full-forward was Adelaide’s leading goal-kicker on five occasions and Fremantle’s in 1999. Modra was also a two-time All-Australian and won the mark of the year in 1993, 1997 and 2000. Small forward Jason Porplyzia would be hoping to get on the end of whatever Modra didn’t mark, while Rhys Stanley would rotate through the ruck and forward-line with Rehn.

Scott Welsh was named at cente-half-forward after kicking 363 goals in 205 games with North Melbourne, the Western Bulldogs and Adelaide. He is surrounded on the flanks by current-Crows coach Matthew Nicks and long-kicking forward Nathan Eagleton. Nicks played 175-games with Sydney, while Eagleton featured in 56 games with Port Adelaide before heading to Victoria, where he played 221 with the Western Bulldogs from 2000-2010.

Riley Bonner can predominantly played a half-back role for the Power but his booming left-foot kick would fit a wing role nicely. Dockers utility Byron Schammer is deserved of a spot in the side after he played 129 matches with Fremantle. Medium-Sized defender Jordan Russell spent time at Collingwood but is better known for his 116 games of service with rivals Carlton. Adding to the defensive depth are fearless former-Tigers backman Steven Morris and former-Bomber Henry Slattery. The final bench spot went to ruckman Cameron Wood.