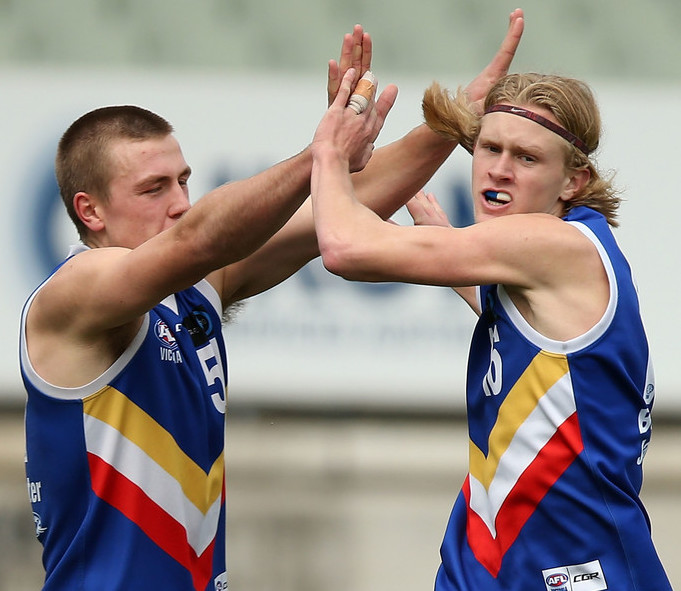 IF you are missing footy like we are, then let us somewhat salvage that with a look back in our series of Classic Contests. In today’s contest we look at another clash between the NAB League rivals to complete our full series, and today’s battle is between the Bendigo Pioneers and Eastern Ranges. In this edition, we wind back the clock to 2016, when the two sides met in Kyabram for what was a high-scoring affair.

There may have been a host of big names missing when Bendigo and Eastern went head-to-head in the 2016 TAC Cup season, but it didn’t stop the extensive talent afield from putting on a high-scoring showcase. A total of 34 goals were kicked between the Pioneers and Ranges as they met in Kyabram, with 17 individual goalkickers spread between the teams, and two star Ranges combining for more than half of their side’s score.

Eastern made the long road trip without the likes of Jordan Gallucci, Callum Brown, and Dylan Clarke, as well as a host of jets from their bottom-age crop which went on to produce 10 AFL draftees. Bendigo also boasted a terrific under-age core in that period, but would not have access to the likes of Paddy Dow, Lochie O’Brien, and Brent Daniels for this encounter. Nine future AFL players still took the field, split five to four in the Ranges’ favour.

Speaking of favours, a clear scoring end was established throughout the match, and the hosts would have access to it first-up. Eight scoring shots to two told of Bendigo’s immense territorial gains, but a 12-point quarter time lead meant the Pioneers had failed to truly capitalise. The game would be opened up massively after the first break, with Eastern edging ahead by one goal at half time on the back of 7.6 to Bendigo’s 5.0.

The third term is often referred to as the premiership quarter, and it was where the Pioneers made their move. In keeping with their accurate conversion rate in term two, the hosts slammed home 9.1 to stream ahead by 39 points heading into the final break. It proved more than enough to withstand Eastern’s final charge, as the Ranges remained 21 points adrift upon the final siren.

Five goals from that year’s Victorian draft bolter, Josh Begley, and four from Collingwood star Jaidyn Stephenson were not enough to peg back Bendigo’s even spread of scorers, even with bigman Sam Hayes (two goals) getting in on the act. Begley was rightly named best afield for the Ranges, with draftees Nathan Mullenger-McHugh and Tom North also recognised for their efforts.

But they would prove fruitless, as Jonty Neaves (four goals) led Bendigo’s scoring surge, backed by the likes of Kayle Kirby (three goals), and Angus Schumacher (two), who was named the winners’ most valuable player. Cooper Jones and Darby Henderson both collected 26 touches to be named among the best, while Joe Atley found it 24 times and Kane Farrell, 18.

The Pioneers would hardly improve their ladder position by season’s end, missing out on finals as their 4-14 record was only good enough for 11th. Eastern fared much better, but only added three more wins to their tally after Round 6, finishing eighth at 7-10. The Ranges were pipped by Sandringham Dragons in a dramatic elimination final to end their season.